TV Review: There’s no fun to be had watching this dull series about a dinner party 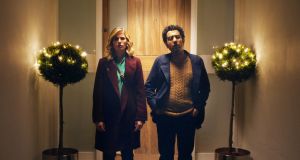 The Circuit: Gabe (Adeel Akhtar) and Nat (Eva Birthistle) have inexplicably left their “wonderful old life” and relocated to a place where their neighbours are “highly strung and psychopathic”

‘Channel 4 invites you to the worst dinner party that’s ever happened in the world anywhere.” That’s the pitch for The Circuit (Thursday), a comedy pilot. I’d politely decline if I were you.

A bad dinner party sounds like a great premise for a comedy show. It’s hard to resist when The Circuit comes from the brilliant people who gave us the rude and raucously funny Pulling.

After a 10-year break from working together Dennis Kelly, who wrote the off-the-wall Utopia for Channel 4 in the meantime, and Sharon Horgan, who has been busy with the Bafta-winning Catastrophe, are back together. The result is this 30-minute one-off about “the horror and hilarity of social engagement”.

We begin with a couple, new to the area – presumably somewhere in London where an unfurnished flat costs roughly the same as Russia’s annual missile budget – arriving at a dinner party thrown by people they don’t know.

Gabe (Adeel Akhtar) and Nat (Eva Birthistle) have inexplicably left their “wonderful old life” and relocated to a place where their neighbours are “highly strung and psychopathic”. Our hosts for the evening are Hungarian Helene (played by Victoria Hamilton) and her English husband, Sasha (Tobias Menzies).

Making up the guest list are Danny (Paul Ready), who is philosophically suicidal; Marty (Nicola Walker), a nondescript former girl-band member; and her American girlfriend, Angie (Desiree Akhavan), who sells bullets for a living.

Our charmless hosts are having what you might call a domestic, and the guests are trapped. And so the fun begins, or at least it should. But there is no fun to be had at this party, even at others’ expense. That’s because Kelly and Horgan haven’t written people; they have drawn a bunch of extreme am-dram caricatures each so heinous and hateable that you end up not caring what any of them say or do.

Hamilton plays her unhinged helium-voiced Hungarian as if she’s doing a bad impression of Martin Short’s wonderfully camp wedding planner, Franck, in Father of the Bride. She keeps opining that she wants to have everyone to have a “lovely, lovely evening” between screaming abuse at her husband over the dinner table, insulting her guests and bursting into tears. Her clinical cardigan-wearing husband makes Patrick Bateman look like a Girl Guide.

Halfway through, still waiting for one ounce of that signature sparkling Sharon Horgan wit, it feels as flat as a day-old glass of Babycham.

Maybe that’s what they were shooting for; maybe we are supposed to want out as much as the guests. This is Kelly and Horgan, after all; it can’t be unfunny, can it?

Maybe I don’t understand The Circuit, and usually when I don’t understand something it turns out to be postmodern, so maybe this isn’t a sit com – it’s a grand postmodern statement on etiquette and social confines laced with Chekhovian tragicomic references. (That might account for the bizarre part written for Danny, who is calm and Yoda-like now that he’s decided to off himself.) If I’m too stupid to get it I apologise, but I won’t say sorry for this: The Circuit is not funny.

Dennis Kelly and Sharon Horgan have said: “It has taken just 10 short years for us to agree to work together again. It was a mistake.” On this occasion they’re right.

Ones to Watch: X Factor – and Queen Victoria – are back

The X Factor (TV3, Saturday) returns, but it’s back to the future for the panel of narcissistic, bickering judges, with Nicole Scherzinger, Sharon Osbourne and Louis Walsh all returning to the bitchiest bench in showbiz, along with the talent show’s host, Dermot O’Leary.

Move over Emily Blunt: it’s the turn of bright-eyed Jenna Coleman (left) to play Queen Victoria. Written by Daisy Goodwin, Victoria (ITV) is the tale of a

young girl’s transition to monarch that promises to be a lush Sunday-night treat.