Anne with an E returns with Donegal teenager Amybeth McNulty 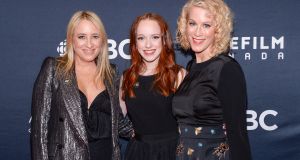 Anne with an E, the critically acclaimed series based on Lucy Maud Montgomery’s Canadian novel Anne of Green Gables, and starring young Donegal actor Amybeth McNulty in the title role, returns to Netflix on July 6th for a second series.

The series, the most recent adaptation of the enduringly popular 1908 novel, is the creation of Emmy-winning Breaking Bad screenwriter and producer Moira Walley-Beckett, who made a grittier and darker version of the well loved story. She conceived the second season with a women-only writers’ room.

The expanded 10-episode season from Miranda de Pencier’s Northwood Entertainment is released on Netflix on July 6th everywhere (aside from Canada, where it is set, and where is is released in September). All episodes will be available at once.

Walley-Beckett brought a 21st-century sensibility to the story, illuminating the “accidental feminist” within Anne, and also reflecting on the effects of the cruelty and neglect and of her early childhood. Netflix says the second season “continues to chart bold new territory, adding new characters and storylines”, and will further explore “themes of identity, prejudice, feminism, bullying, gender parity and empowerment through the lens of its fierce, starry-eyed, irrepressible 14-year-old protagonist”.

In the reimagined version of Montgomery’s story, the core remains: an ageing, emotionally repressed brother and sister – the ultra-shy Matthew Cuthbert (RH Thomson) and austere Marilla Cuthbert (Geraldine James) – decide to adopt an orphan boy because they need labour on their farm, Green Gables on Prince Edward Island, Canada. Because of a mix-up they get a girl, the hilariously earnest Anne – red-haired and pigtailed, smart, talkative and imaginative.

Anne’s vivid imagination is both charming and her survival technique, and the first season of this adaptation is a sadder, more realistic story, as we might expect from one of the creators of Breaking Bad.

McNulty, from Letterkenny, Co Donegal, who has an Irish father and a Canadian mother, beat more than 1,800 girls auditioning internationally to win the role. The 16-year-old first auditioned online from home, and later in Toronto.

Walley-Beckett has said of McNulty: “She’s riveting on screen, she’s translucent. You can see every thought and every emotion.”

McNulty was chosen for her ability to deliver dialogue which is “incredibly thick and dynamic and beautiful”, according to producer de Pencier.

“I kind of liked [Anne’s] spirit,” McNulty told Tanya Sweeney in The Irish Times after the first season.

“She is one of the few feisty female characters from that time, and I love that she questioned things. She was a feminist before the word even existed. Back then, she knew if she encountered sexism in her life, that something wasn’t quite right. I thought that was really exciting and incredible.

“I think it’s really important, the message that Anne gives to people, just to really stand up to prejudice and sexism . . . these are things that Anne came up against 150 years ago, and they are prejudices we still suffer today.

McNulty started with ballet and amateur performances at An Grianán Theatre in Letterkenny and later performed in musicals by writer/composer Paul Boyd. Her first screen performance was in the four-part RTÉ series Clean Break and she has also been in the Agatha Raisin for Sky and The Sparticle Mystery for CBBC.

She was homeschooled in Donegal. “Luckily, being home-schooled has been very useful [for auditions and work]. I’m at the ‘un-schooling’ end of the spectrum where I don’t have to do exams. With un-schooling, you learn things through living them, as opposed to learning in a school setting.”

She said: “I’d maybe like to go to university . . . they keep places for home-educated children. I’ve been having thoughts about what I want to do, and I have a couple of options open to me – archery, writing, dancing and even coding – but acting is definitely the main one for me.”

It was originally broadcast on Canadian network CBC-TV in March 2017, and won an Academy of Canadian Cinema and Television award for Best Dramatic Series.

McNulty says she is a bookworm, read the Anne of Green Gables books when she was nine, and shares many traits with Montgomery’s feisty girl. “She has so much love for the world, which I think I share with her. And her curiosity about everything, how she can be so fierce and so bold but so gentle and so loving.”

And after a second series, there is more scope for the network to capitalise on popularity: Montgomery continued the tale and wrote more Anne novels: Anne of Avonlea, Anne of the Island, Anne of Windy Willows.