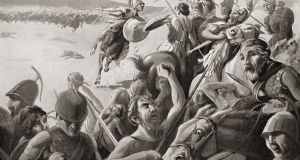 The Battle of Cynoscephalae, Greece, 197BC between the Roman army and the Macedon. Photograph: Universal History Archive/UIG via Getty Images

Ancient Greece. Ancient Rome. These words conjure up powerful images: the Olympic Games and the siege of Troy for the former; emperors, legions and gladiator fights for the latter. Two civilisations that impacted massively on world history, their effects are still evident today in language and legal structures, in sport, medicine and philosophy. It’s odd then that the clash between the two powers is so little-known today. Researching the period, I was amazed that no one had written, recently at least, about one of the most seismic moments in European history. Clash of Empires is the result, and the first in a two-part series.

Let us set the stage. Before the outbreak of the second Punic war in 218 BC (the one with Hannibal and the passage of the Alps with elephants!), the Roman Republic controlled perhaps three-quarters of the Italian peninsula. Its only external territories were the islands of Sicily, Corsica and Sardinia. There were four other powers in the Mediterranean world, two of which were a great deal larger than Rome. In order of size these were the Seleucid Empire, which extended from modern-day Turkey to India, Carthage on the North African coast, which also controlled most of the Iberian peninsula, Ptolemaic Egypt, ruled by Greek-speaking descendants of one of Alexander’s generals, and Macedon, which dominated much of Greece.

By 168 BC, 50 years later, just two powers remained: Rome and a tottering Egypt. The others had been defeated by the military bulldozers that were the legions. Rome had changed identity forever. No longer the combative newcomer of the Mediterranean world, it was now a confident, brash superpower. The first paving stones of the road to empire had been well and truly laid.

The history of Rome and Macedon is a tangled one; to explain it in depth goes beyond the remit of this article. The two powers actually fought three wars, from 217 to 205 BC, 200 to 197 BC and 171 to 168 BC; the second was of most consequence. A short but brutal affair, it was also the conflict that saw Rome’s authority stamped on Greece, and is the one upon which we will focus.

The ruler of Macedon at the time of both the first and second conflicts was the mercurial and unpredictable King Philip V. Scion of a different family to Alexander the Great (whose line had been wiped out after his death), Philip was capable of individual acts of military brilliance and colossally rash decisions. Cursed by the fact that most city states in Greece loathed Macedon, as they had since Alexander’s time, he spent his reign dealing with political machinations against him, invasions from neighbouring territories and open war with many of his neighbours.

Philip seemed to live his life by the ancient Greek saying that a king who lived in peace was no king at all.

On all points of the compass then, Macedon had enemies, open, hidden or in the making, and when Philip wasn’t dealing with these problems, he was invading or fighting with other kingdoms and territories. Illyria and Epirus (modern-day Croatia/Montenegro/Albania), Thrace (Bulgaria), the Hellespont (the Straits of Bosphorus) and the western coastline and islands of Asia Minor (Turkey) all suffered his attacks on more than one occasion. Philip seemed to live his life by the ancient Greek saying that a king who lived in peace was no king at all. It’s hard not to draw the conclusion that he had aspirations of emulating the feats of his illustrious predecessor Alexander. Sadly for Philip, he never quite succeeded in that regard.

By the autumn of 202 BC, the 17-year war between Rome and Carthage was drawing to a close. The final act took place at Zama, not far from the city of Carthage; the battle resulted in a decisive defeat for Hannibal’s army. After a conflict that had lasted a generation, seen huge swathes of Italy go over to the enemy, and cost the lives of hundreds of thousands of its citizens, one might assume that the Roman Republic would have lost its appetite for war by this point. Not so. Less than two years after Zama, embassies sent by Philip’s enemies in Asia Minor pleaded for help against his attacks on their territories. Conjuring the idea of a possible Macedonian invasion of Italy, these emissaries won over the Senate. There was some resistance from the Centuriate, the people’s assembly, but the vote for war was carried in the summer of 200 BC.

Rome didn’t hang about, dispatching an army to Apollonia in modern-day Albania. Autumn had arrived before the legions could march inland; although they succeeded in taking a Macedonian town, a full-blown campaign was not on the cards due to the harsh terrain and imminent change in the weather. The war was renewed in the spring of 199 BC, the legions led by a seasoned politician and justice of the war with Hannibal, Sulpicius Galba. Smashing past Philip’s phalanx in a mountain pass without defeating it utterly, the Roman army marched eastward into Macedon. A game of cat and mouse ensued over the summer, with each side seeking battle on its own terms. A victory for the Romans at Ottolobus, when Philip almost lost his life, was countered by a Macedonian win at Pluinna. Harvest-time arrived without a conclusive outcome. Far from their base at Apollonia, with supply lines at risk of being cut by snow or the Macedonians, Galba took the sensible option and retreated to the coast.

In many ways, the politics of two thousand years ago were no different to today. The newly-elected man always likes to take control. Soon after his return to Apollonia, Galba found himself being supplanted by the consul Villius. He in turn was replaced just months later by a more formidable figure, Titus Quinctius Flamininus. Thirty years old, extraordinarily young to command a large army, Flamininus took the invasion in his stride. A lover of all things Greek, he could speak and write the language as well – something unusual for Romans of the time.

His initial attempts to enter Macedon failed, however, and in the spring of 198 BC a 40-day standoff in the narrow Aous valley (the modern-day River Vjosa) unfolded, with his legionaries unable to push past the Macedonian fortifications. In scenes reminiscent of Thermopylae, the deadlock was broken by a local shepherd who led the Romans around Philip’s position. Attacked from front and rear, his troops fell back in panic. Flamininus’ legions swept into western Macedon and onward to fertile Thessaly. Although Philip lost large swathes of territory, his phalanx delivered a mighty setback to the Roman army soon after at the fortress of Atrax. Once again, with autumn approaching, the war proper was put on hold until the following spring.

Prolonged negotiations during the winter months saw Philip’s attempts to broker a peace settlement thwarted by Flamininus’ trickery. When the campaign began again in the spring of 197 BC, a showdown was inevitable. After a few weeks of marching and countermarching by Philip and Flamininus in central Thessaly, battle was joined (almost by accident) at Cynoscephalae, hills known as The Dogs’ Heads. Invincible on flat ground as long as its flanks were protected, the phalanx was dangerously exposed on hillsides. Highly manoeuvrable, veterans of the Hannibalic war, the legionaries wreaked a terrible slaughter.

A negotiated settlement saw Philip remain as king of Macedon, in the main to serve as a buffer against the threat of the Seleucid Empire to the east, but the fate of the Greek city states who had aided and abetted the Roman invasion was the most ironic. Although their freedom was proclaimed by Flamininus at the Isthmian games in 196 BC, they were soon to realise that they had merely exchanged one master for another. Not for hundreds of years would the Greeks rule themselves again.
Ben Kane’s latest book Clash of Empires is out now (Orion, £14.99)