Trump doesn’t have a pet – is that proof he’s a bad president?

Many pets have padded through the White House; some have been used for political gain 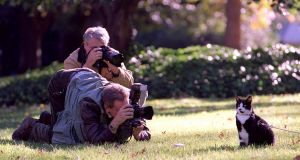 As you will now be aware, Kamala Harris, recently confirmed Democratic candidate for US vice-president, is both Wall Street’s favourite cop and the advance guard for neo-Maoism. Let’s see her deflect the really important accusations. Senator Harris has often tweeted about her affection for animals. So, why does she not have a pet? No dog. No cat. No budgie. Answer the question, “Phony Kamala Harris” (©D Trump).

Obviously, the animal problem doesn’t actually matter and, even if it did, the Trump campaign would not be fastening upon it. Mention of this subject calls up an under-discussed oddity of the current presidency. Mr Trump is the first holder of the office in around 150 years not to bring a pet into the White House. If we admit Andrew Johnson, who befriended already-resident white mice, into the animal-tending fold, then you have to go way back to antebellum trivia-staple Andrew Polk in 1849 for an administration with no Fido, Tiddles or Joey. (After writing that last list of stereotypical names, I was reminded that Abraham Lincoln’s dog really was called Fido.)

Obviously we’re going to argue that this information further confirms the utter wretchedness of the 45th president of the United States. You’d expect as much. Before that, however, it’s worth pondering the vast menagerie of animals who have shared photo opportunities with American premiers. We get a bit of this on the right-hand side of the Atlantic. President Michael D Higgins is apparently inseparable from Síoda and Bród, his enormous Bernese mountain dogs. Brigitte and Emmanuel Macron are close to Nemo, their black Labrador. Try as he might, Dilyn, Boris Johnson’s Jack Russell, fails to upstage Larry, the imperious, politically neutral Downing Street cat. But the American presidency is much more interwoven with the doings of domesticated beasts. They are there to distract, humanise and decorate. In at least one instance, a political dog helped save a career.

Kamala Harris may want to grab hold of a cocker spaniel as insurance. You never know

Barack Obama, the preceding occupant of the White House, brought Bo and Sunny, hypoallergenic Portuguese water dogs, into the building as companions for Michelle, Sasha and the allergic Malia. A famous photo of the prez bouncing along a corridor with Bo helped establish the youthful exuberance his handlers so craved. George W Bush was happy to haul Barney, a Scottish terrier, from Rose Garden to helicopter whenever the press demanded.

Socks, the most famous presidential cat of recent decades, was involved in an under-reported betrayal by the Clinton administration. Adopted by Chelsea Clinton in 1991, the black-and-white moggie was initially something of a star. He welcomed younger visitors to the very first White House website. He was taken on trips to schools and hospitals. When, however, he fell out with Buddy, a chocolate Labrador acquired by Bill in 1997, it was the cat who was sent away to live with friendly secretary Betty Currie. Happily, that last sentence is not a kindly euphemism (like being “sent to live on a farm”). Socks took his revenge in the traditional manner by living well. He remained with Ms Currie until his death, at the venerable age of 19 (or maybe 20), a year into the Obama administration. A car killed the favoured Buddy before he had reached his fifth birthday.

We could go on and on. At least one whole book has been written on the subject. Presidential Pets: The Weird, Wacky, Little, Big, Scary, Strange Animals That Have Lived in the White House by Julia Moberg tells us the touching story of Warren Harding and the faithful Laddie Boy. When that president – little loved by humans – died in 1923, his Airedale terrier was unable to process the tragedy. “He has been casting an expectant eye and cocking a watchful ear at the motor cars which roll up on the White House drive,” a contemporaneous report read. “For, in his dog sense way, he seems to reason that an automobile took [Harding] away, so an automobile must bring them back.”

In 1952, a full 16 years before he became president, Richard Nixon, then senator for California and candidate for vice-president, incorporated his children’s dog Checkers into a lachrymose speech aimed at deflecting accusations of financial corruption. It worked. Who would dare question the integrity of a politician who so loved the family pet? Kamala Harris, the next senator for California to become candidate for vice-president, may want to grab hold of a cocker spaniel as insurance. You never know.

We could pretend that Trump’s inability to love a turtle or cherish a parakeet confirms a terminal lack of empathy. It sounds plausible and any excuse to put him in the stocks is greedily appreciated. But the argument doesn’t hold up. Applying the converse of Godwin’s law, we wearily drag out Adolf Hitler’s unwavering affection for dogs. Animal lovers are just as capable of malevolence as those who flee at the merest glimpse of a Weimaraner. There are plenty of racists on social media with dogs in their profile pictures.

Many occupants of the White House were genuinely fond of their pets. But the sheer volume of animals passing through the Executive Residence suggests that a political ruse has long been afoot. Moberg’s book confirms that, when the Harding presidency was rocked by scandals, the president “was still viewed as a decent and respectable politician due in part to his close and loving relationship with Laddie Boy”. Nixon worked the blameless Checkers brilliantly. I don’t doubt that Joe Biden loves Major, his German Shepherd, but the story of that animal’s rescue after being exposed to toxic chemicals will play like gangbusters to the animal-loving contingent. Elizabeth Warren made Bailey, her golden retriever, an unavoidable part of her nomination run.

One thinks of David Brent cynically bringing a dog to his old place of work in the last episode of The Office. The pompous, not-much-loved ex-boss is now adjacent to the centre of attention. Some peripheral affection comes his way. Patting your dog is an easier way of showing empathy than devising effective plans for universal healthcare.

Much as it pains one to admit it, Donald Trump knows this and has said as much. “I wouldn’t mind having one, honestly, but I don’t have any time,” he said. “It feels a little phony to me. A lot of people say, ‘Oh, you should get a dog.’ Why? ‘It’s good politically.’ I said, that’s not the relationship I have with my people.” It’s hard to argue with that. One key to his success has been a reluctance to pretend to the ordinary pleasantries that have hitherto been expected of presidential candidates.

It is what it is. He is what he is. There is a horrible sincerity there.