Too many critics still regard television as an inferior medium

The inclusion of 'Twin Peaks: The Return' on such lists is bizarre: it’s a TV series. Right? 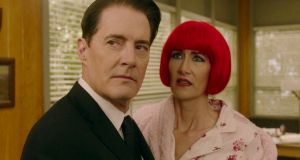 The end-of-year lists are rolling in. I’m reading that an oxbow lake is among the New York Times’ favourite dance events of 2017. It seems that two cats in a bin are challenging for the Guardian’s most enjoyable novel.

Not really. Sight and Sound magazine has, however, voted David Lynch’s Twin Peaks: The Return as the second most admired film of 2017. That venerable publication, official organ of the British Film Institute, has long had an eccentric approach to its annual poll. The blurb tells us that “188 international critics and curators choose the five new releases that made the biggest impact on them in 2017”. Little attention is paid to release dates. Some contributors will vote on films they’ve seen at festivals. Others stick to movies theatrically exhibited in their home territories. Personal Shopper, screened at Cannes in 2016 but not released here until this March, came in at No 11 last year and at No 16 in the current poll. It’s mad, Ted.

The inclusion of Twin Peaks: The Return is more controversial still. It’s a television series. Right? If it qualifies then why not Mindhunter or The Handmaid’s Tale or (a facetious stretch here) The Great British Bake Off? Ask Cahiers du Cinéma, the achingly pointy-headed French film journal, which actually named Twin Peaks as the best film of 2017.

True, the first episodes premiered at Cannes, but even that decision met with controversy. Thierry Fremaux, the artistic director, commented: “I don’t quite understand all the hype about the Twin Peaks series, but we at Cannes prize fidelity and generosity towards auteurs whom we value.”

That didn’t sound like a rigorous endorsement. Before the event started, smarting from criticism concerning the inclusion of Netflix movies unreleased in cinemas, the organisers declared that, in future, a film must commit to a theatrical release before being accepted into the Official Selection. The implication here is that a movie is something that appears in a cinema.

In the current slippery climate that definition does seem a little restrictive. The Irish Times grudgingly included some exclusive Netflix releases in its 2017 Ticket Awards. You’ll find mention of Mudbound, The Meyerowitz Stories and Okja in some categories. With that streaming service offering budgets to compare (indeed exceed) those provided by the traditional studios, the finished product ends up – when viewed on your home screen – looking indistinguishable from a theatrical release. Martin Scorsese turned to Netflix when nobody else would finance his upcoming The Irishman. Expect that to be considered by many critics when voting in 12 months’ time.

Episodic television is, surely, in a different category. A similar debate kicked up earlier this year when all 467 minutes of ESPN’s OJ: Made in America won the Oscar for best documentary feature. The excuse was that, having screened theatrically at Sundance and in some cinemas, it counted as a movie. Few people were convinced. A film is, surely, a single entity that the viewer can absorb in one digestible unit. The Academy of Motion Picture Arts and Sciences eventually accepted that logic and, in April, announced that multi-part documentaries would henceforth be barred from the competition.

Some critics have made the argument that, told in a continuous story with one creative force behind the tiller, Twin Peaks has the character of a film. Yet much the same could be said of The Wire or Breaking Bad. The television showrunner is now at least as powerful a creative force as the old-school auteur.

Two interlocking truths are behind this surprising development. The first is to do with the affection and respect that David Lynch generates. If Barry Paycheck had written and directed Twin Peaks then – however well it turned out – few critics would be including it on their ballots alongside Get Out or Call Me By Your Name.

The second unavoidable conclusion is that too many critics still regard television as an inferior medium to motion pictures (which it obviously isn’t). There is a sense that, thanks to the seriousness of its intent and the breadth of its achievement, Twin Peaks: The Return has earned the right to compete with emanations of the superior discipline. Let’s work that rule in reverse. Let’s redesignate bad theatrical releases as one-off television events. No, that would just be silly.

David Lynch may well regard Twin Peaks as a film. Given his surreal tendencies, he may regard it as a combine harvester. But most pundits will feel like Dr Johnson when confronted with Bishop Berkeley’s argument for the non-existence of matter. Boswell explained: “I never shall forget the alacrity with which Johnson answered, striking his foot with mighty force against a large stone, till he rebounded from it, ‘I refute it thus.’”

We know a TV series when we see one. If in doubt, just kick it and see if your foot hurts.