Tom Stade: On My Culture Radar

The comedian on The Band, ‘funny’ Pierce Brosnan and why he loves Trump’s tweets 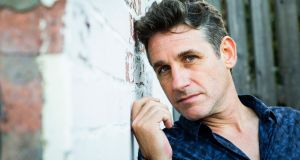 Tom Stade: ‘I live with my son who makes films, so I can’t watch films the same way I used to. He wrecked it for me’

Current favourite book
I love books that give me an upper hand on knowing human behaviour. It helps me with my profession. I don’t use it for evil, only for good. I’m the Batman of comedy. I just read Jean Baudrillard’s Simulacra and Simulation. It’s about how nothing is real any more, but the problem is that the copies are getting better than the real thing was, if you could even remember what it was. So if you think of an original comedian, everything is copied off of him, and there’s a copy of a copy, and everything is diluted. But it seems real, and if you don’t have anything real, you cling on to unreality and make it real.

Comedian
My biggest influence is George Carlin. He never backed down. If you look at his career arc, he just got better and better – and the better he got, the more he divided people. But the people who got him, really got him.

Play/musical
Everybody’s Talking about Jamie is the first play I’d seen that’s not written by Gershwin or some old dude that has no relevance any more. It’s about a gay guy coming out and he has to fight to wear what he wants at his school dance. And the tunes are rockin’ while that’s going on. I don’t really like musicals, but my daughter is a dancer, so I’m forced to learn the art of musicals through my love of her.

Album
My son got me The Band’s first [self-titled] album for Christmas. I’m still listening to that, especially When You Awake, and Up on Cripple Creek: old tunes that no one remembers. If I asked my 18-year-old if she knew who The Band is, she’d ask: “Which one?”

City
I’ve just come back from Berlin. I had been before but I didn’t appreciate it because I wasn’t with my wife, Trudy, so I just ended up going to different bars. We went to places that remembered the Holocaust. Berlin doesn’t have a world fair feel – they’re like, ‘and this is the part where we killed so many people’. They also had cigarette machines in all the restaurants, and they didn’t close bars at 2am – they’d close when you leave. It’s the best place in the world.

Actor
Pierce Brosnan is the most underrated and funniest actor. I’m in awe when I watch him. The Matador was hilarious, [he played] a hitman that just wanted to quit. Him and co-star Greg Kinnear were hilarious, I couldn’t stop laughing. But then he’s in The Thomas Crown Affair. And then he’s the coolest dude in Mamma Mia! You can never peg this guy.

Gadget
My Pressure King Pro. I bring it with me to all my gigs because I like to cook in my room because I’m getting old and I smoke and I drink, so I like to eat healthy at least. I have it here in front of me. We had delicious beef in a Travelodge.

Social media profile
I love Donald Trump’s tweets (@realdonaldtrump). I love the insanity. It’s like someone said, “Let’s let the crazy guy drive”, and we’re all in the back seat freaking out.

TV show
Preacher is a show adapted from a comic book. It’s about a guy [Dominic Cooper] who gets a demon thrown in him, so he and his friends [Ruth Negga and Joseph Gilgun] go around looking for God, in like, New Orleans strip clubs. It’s really well done.

Film
I live with my son who makes films, so I can’t watch films the same way I used to. He wrecked it for me. So now I watch them with a very critical eye, but I got sucked into The Ballad of Buster Scruggs by the Coen Brothers very quickly. It stars James Franco, Liam Neeson and Tim Blake Nelson, who’s in O Brother Where Art Thou? And to have Tom Waits in it? What a great cast. Because of that mix of people, they created something new, and that made it fabulous. Plus I liked Avengers: Infinity Wars. I’m a comic book fan, and that as well as Thor: Ragnarok are the only two they got right.