Avengers: Endgame set to become the fifth Marvel film in top 10 grossing of all time 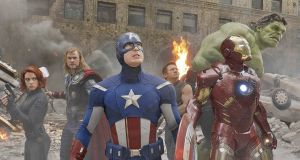 The Avengers in action

As so often in life, the answer lies somewhere between extremes. But there could be no better time to pretend we are dealing with such a binary dilemma. Never before in the history of the entertainment industry has one organisation had so much control of the moving image. We mean Marvel. We also mean their corporate minders at Walt Disney.

Four of the 10 highest-grossing films of all time are Marvel entertainments: Avengers: Infinity War, Marvel Avengers Assemble (as nobody actually calls it), Avengers: Age of Ultron and Black Panther. Barring the sort of alien apocalypse that is averted so often at the end of these films, the upcoming Avengers: Endgame will soon nudge out the last remaining Harry Potter episode and secure a 50 per cent share for the late Stan Lee’s empire.

If Avengers: Endgame doesn’t find a place in the top five then it will be regarded as a disappointment. This is like being Pete Sampras in his prime

The presence of Star Wars: The Force Awakens at number four brings the Disney tally to six. James Cameron’s Avatar, produced for Fox, still sits at number one, but, following Disney’s recent acquisition of 21st Century Fox, that film is to be retrospectively inducted into the Mouse House. Don’t rule out the upcoming remake of The Lion King also staking a place in the top 10. The dominance is staggering.

Joe and Anthony Russo, the fraternal directors of Endgame, would still be justified in feeling nervous. The expectations for the new film are absurd. Avengers: Infinity War, which they also directed, scored more than $2 billion to become the fourth highest-grossing film of all time. Its successor is thought likely to surpass that. If it doesn’t find a place in the top five then it will be regarded as a disappointment. This is like being Pete Sampras in his prime. If you don’t win Wimbledon you’ve embarrassed yourself.

“Our job is to tell the best story we can,” Joe, the younger of the two, tells me. “We just send it into the world. Disney’s marketing team do an amazing job with everything that they touch. So we just keep out fingers crossed.”

Anthony has begun a further deflection when I point out that the film will have to break records to be accounted anything other than a failure.

“We take ourselves out of that,” Anthony says. “What is in our control is what we can do as filmmakers. We focus on that. What is this movie? We are both very proud and happy with the film that we made. They made their choice when they hired us to make the movie.”

The cycle of Marvel films has been arranged in a series of three “phases”, but, truth be told, only those paying close attention could tell when phase one passed into phase two and when that morphed into the current phase. The imminent end of the fourth anthology is, however, a different business.

Anyone bothered to read this article will already know that at the end of Avengers: Infinity War a number of our heroes were annihilated in an act of intergalactic Malthusian adjustment. People who did not, as we say in Belfast, come up the Lagan in a bubble, will be equally aware that such apparently vanished crusaders as Black Panther (whose standalone picture took $1.3 billion) and Spider-Man (whose last flick took $880 million) will be back for further episodes. Indeed, Spider-Man: Far From Home, sequel to the delightful Spider-Man: Homecoming, debuts as soon as July 5th of this year.

It has, nonetheless, emerged that some of the senior actors are about to call it a day. Chris Evans, who plays Captain America, Mark Ruffalo, who finally made the Hulk amusing, and Robert Downey Jr, twitchy as Iron Man, all look to be getting out before the temples become too greyed. Millennials such as Tom Holland, the current Spider-Man, and Brie Larson, a hit in Captain Marvel, are taking over from the (mostly still nimble, to be fair) Generation X performers.

Meanwhile, Disney moves forward with plans for its much heralded streaming service. Disney+ looks to become the Spider-Man to Netflix’s Dr Doom (Netflix would, obviously, view it the other way around). Marvel series on their rival service such as Daredevil and Jessica Jones have been quietly tidied away as fans anticipate the arrival of Loki, concerning Thor’s half brother, and WandaVision, focussing on Scarlet Witch and Vision, on Disney+ sometime after its launch this autumn.

The second golden age of comic-books — the one that allowed weedy Baby Boomers a chance to imagine stronger, witter version of themselves — has belatedly taken over the levers of power and, in renewed millennial leotards, it now looks towards a future of eternal dominance. It’s worth reminding ourselves that the triumph was not inevitable.

Hollywood had a real struggle making superheroes into box-office gold. The Superman and Batman franchises, both effusions of DC, roared and then spluttered in the last decades of the 20th century. Nobody got anywhere with big-budget Marvel movies. M Night Shyamalan told me recently that, in 1999, he had trouble getting Unbreakable financed because the studio (a subsidiary of Disney, ironically) felt that comic-book films were box-office poison. “Comic-book conventions felt very niche,” he laughed. “‘The last thing you want to do is turn off the general public,’ they said. The feeling was you were being ridiculous.”

Just a few years later, Sam Raimi’s Spider-Man for Sony proved the doubters wrong. The film played well to critics and was an enormous financial success. Marvel saw the potential for an expanded empire and launched the Marvel Cinematic Universe in 2008 with Iron Man. That film was distributed by Paramount. Fox had X-Men, The Fantastic Four and (a bit later) Deadpool. Disney’s subsequent partnership with Marvel Studios and its recent acquisition of Fox permitted the unification of titles for which boxing fans have long yearned.

The wider dominance of Walt Disney kicks up different risks

The long campaign has been largely the work of Marvel Studios president Kevin Feige. Still only 45, the comic-book fan has paced the assault with military precision. I imagine him initialing every invoice and approving every batch of rushes.

“Kevin is always very involved. He is one of the best — if not the best — producers we’ve ever worked with,” says Anthony Russo. “He would be doing the movie a disservice if he behaved any differently. He is a very supportive, creative producer. Nobody’s getting nervous. Nobody’s second guessing.”

There is no point getting too snitty about this. The Marvel Cinematic Universe has helped keep cinema remain in the pop cultural conversation in the era of the streaming giants and of attention-sapping social media.

“They are archetypes. That’s part of what makes Marvel successful,” Joe Russo says. “They are flawed and human characters. We have tried to do as much as we can to commit to a psychological realism. So they make mistakes. They make bad choices. There is a very inspiring thematic line.”

It is, of course, true — as every movie producer will tell you — that the mid-budget movie has, aside for a few lucky awards-season favourites, been squeezed out of mainstream exhibition. It hardly seems possible now, but Rain Man was the highest grossing film of 1988. Thirty years later, no intimate drama concerning two blokes in a car would have a chance of beating the current Marvel or Star Wars behemoth. But that depletion could well have happened anyway. The slump of 2008 did for modestly graded movie financing and the market has never entirely recovered. We should be grateful that the Avengers are keeping the big screens packed.

The wider dominance of Walt Disney kicks up different risks. Many observers have looked back to the anti-trust cases of the late 1940s that ultimately prohibited the studios from controlling the means of exhibition as well as production. Indeed, Disney’s acquisition of 21st Century Fox constitutes the sort of “horizontal merger” — between companies doing the same job — that has traditionally more troubled US authorities than the “vertical” connections that were in place when studios owned movie theatres. Nonetheless, the deal has gone ahead and, in due course, the X-Men will find a place in what becomes of the Marvel Cinematic Universe.

The only thing that can slow Disney now is audience fatigue. There’s no sign of that in the Marvel wing of the empire. A hundred journalists mill about the press junket in central London. Paul Rudd is eating his lunch in the lobby. The Russos are preparing for a flight to Korea.

“They are binding the world together,” Joe says. “You don’t often see cultural events like this — that pull audiences together all over the globe and create a common dialogue. The box office for Captain Marvel and the box office for Black Panther would seem to signify it’s turning up, not turning down.”

Make of the Marvel Cinematic Universe what you will. It ain’t going anywhere.