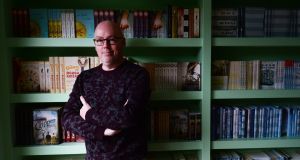 John Boyne: “I chose to write Sam and Jessica’s story as a deliberately imperfect one in order for me to highlight the mistakes people make and how important empathy is.” Photograph: Alan Betson

John Boyne’s publisher Puffin has said it is proud to be publishing his novel about a transgender teen, after the book was dismissed as “transphobic” by some activists. The author left Twitter this week after a social media backlash over an article he wrote in The Irish Times about the book. My Brother’s Name is Jessica, which is published today, is about a boy’s journey to understanding and accepting his transgender sister.

“John Boyne is one of the world’s most beloved writers, and we are proud to be publishing My Brother’s Name is Jessica,” said Francesca Dow, MD of Penguin Random House Children’s. “It is a wonderful piece of storytelling that takes a timely look at the complexity of gender identity from one family’s perspective, and explores the importance of empathy and understanding. The story reflects a family’s journey from a place of ignorance to one of acceptance and celebration although we understand this is not every trans person or family’s experience.”

Boyne said the novel reflects his character Sam’s struggle to no longer refer to his trans sister Jessica by the gender Sam has always known her by. In a statement to the Bookseller, he said: “I am not Sam, and do not condone his behaviour or agree with his stance at the beginning of the book. I chose to write Sam and Jessica’s story as a deliberately imperfect one in order for me to highlight the mistakes people make and how important empathy is.”

Hannah Sullivan is the inaugural winner of the €10,000 John Pollard Foundation International Poetry Prize at Trinity College Dublin. Sullivan was awarded the prize for her debut collection Three Poems, which was published by Faber & Faber last year and recently won the TS Eliot Prize.

Roddy Doyle’s latest book, Charlie Savage, the tales of a middle-aged Dubliner, has made the six-strong shortlist for the Bollinger Everyman Wodehouse Prize for Comic Fiction 2019. The prize faced controversy last year when it was withheld because no book was judged funny enough to deserve to win. Bestselling author Marian Keyes accused judges of a “sexist imbalance” in the prize, which has only been awarded three times in its 18 years to women writers, after she failed to make the shortlist. This year’s shortlist features four women.

Coming up in the books pages of The Irish Times in our new-look Ticket this Saturday, Diarmaid Ferriter marks the 30th anniversary of Joe Lee’s seminal history book, Ireland, 1912-1985: Politics and Society, with an assessment and appreciation of the historian and his work.

Daniel Defoe’s Robinson Crusoe, meanwhile, is 300 and Brian Maye has been looking at his many and varied literary descendants. John Connolly’s Charlie Parker is a mere pup by comparison, 20 years young, but nevertheless we sent Declan Hughes along to meet his maker, so to speak.

We mark the tragic fire that struck Notre-Dame in Paris with two poems, one by Catherine Phil MacCarthy written beforehand, the other, by Mary O’Malley, written in response.

Our reviews include Fintan O’Toole on The Scar by Mary Cregan; Seamus O’Mahony on Just One More Question: Stories from a Life in Neurology by Niall Tubridy; Declan Hughes on the best new criome fiction; Rabeea Saleem on Machines Like Me by Ian McEwan; Paul D’Alton on The Book You Wish Your Parents Had Read by Philippa Perry; Michael Cronin on The Capital by Robert Menasse; JP O’Malley on So Much Longing in So Little Space: The Art of Edvard Munch by Karl Ove Knausgaard; Julia Kelly on The Flatshare by Beth O’Leary; Rob Doyle on À Rebours or Against Nature by JK Huysmans, translated by Robert Baldick; Vic Duggan on Open: the Progressive Case for Free Trade, Immigration and Global Capital by Kimberly Clausing and Paul Clements on local history.

You can also save €4 on the cover price of The Clockmaker’s Daughter by Kate Morton when you buy The Irish Times in any Eason store this weekend.