As thousands of meteors fell one 1833 night, slavers told slaves where their families had been sold 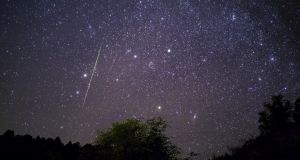 The Leonids meteor shower across the night sky above Payson, Arizona. Photograph: iStock

November 1833. As the night skies exploded and the stars fell on America’s Deep South, the slavers on one plantation in Tennessee – terrified of the end of the world – attempted to make restitution to those they had enslaved.

Every year, in mid-November, the Earth passes through the Leonids, a huge meteor cloud left behind by the Comet Tempel-Tuttle. Each year sees impressive displays, with certain nights offering particularly spectacular meteor showers.

It is 186 years since the Leonids put on that striking show over the US south, and it is still remembered there as “The Night the Stars Fell”. The 1930s jazz standard Stars Fell on Alabama immortalised the night.

“On the night of November 12th to 13th, 1833,” wrote Victorian astronomy writer Agnes Clerke, “a tempest of falling stars broke over the Earth.

Harriet Tubmann, another great abolitionist, said in later life that it had showed her to always follow the Northern Star to freedom

“The sky was scored in every direction with shining tracks and illuminated with majestic fireballs. At Boston, the frequency of meteors was estimated to be about half that of flakes of snow in an average snowstorm. Their numbers ... were quite beyond counting; but as it waned, a reckoning was attempted, from which it was computed, on the basis of that much-diminished rate, that 240,000 must have been visible during the nine hours they continued to fall.”

In Alabama, the Florence Gazette reported there were: “thousands of luminous bodies shooting across the firmament in every direction.

“There was little wind and not a trace of clouds, and the meteors succeeded each other in quick succession.”

Several Native American nations noted the celestial drama, with the Lakota people resetting their calendar to commemorate the occurrence. Along the banks of the Missouri river, Mormon refugees, driven from their homes by settlers, watched as the stars fell, while Joseph Smith, founder of the Church of the Latter-Day Saints, recorded the event in his diary as a sign that the second coming of Christ was at hand.

Abraham Lincoln witnessed the meteor storm, as did Frederick Douglass. Harriet Tubmann, another great abolitionist, said in later life that it had showed her to always follow the Northern Star to freedom.

‘They thought it was judgment day’

In Maury County, Tennessee, a small girl, born into slavery, was awoken in her cot by the sound of screaming.

The story of Amanda Young, who died in 1920, was recounted in 2010 by her great-great granddaughter Angela Y Walton-Raji as part of a family oral history. Walton-Raji had travelled to Chicago to meet her own elderly cousin, Frances Swader, and to hear from her Young’s story.

Walton-Raji reported Young’s words thus: “Somebody in the quarters started yellin’ in the middle of the night to come out and to look up at the sky. We went outside and there they was a-fallin’ everywhere!

“Big stars coming down real close to the groun’ and just before they hit the ground they would burn up! We was all scared. Some o’ the folks was screamin’, and some was prayin’. We all made so much noise, the white folks came out to see what was happenin’. They looked up and then they got scared, too.

“But then the white folks started callin’ all the slaves together, and for no reason, they started tellin’ some of the slaves who their mothers and fathers was, and who they’d been sold to and where. The old folks was so glad to hear where their people went. They made sure we all knew what happened … you see, they thought it was Judgement Day.”

A century after the Night the Stars Fell, the song Stars Fell on Alabama was written by Frank Perkins, with lyrics by Mitchell Parish. One of the earliest-known recordings, from 1934, was by the Guy Lombardo orchestra, with Lombardo’s brother Carmen on vocals.

The Leonids meteor shower will peak this year on the morning of Monday November 18th, but David Moore of Astronomy Ireland thinks the best chance of a good display might be around 3am on Saturday 16th.

“However, the moon is around this year,” he warns, “and that’s going to brighten the sky.”

Meteors are fragments of dust about the size of a grain of sand, travelling at speeds of over 253,000 km/h, burning up on entry into the Earth’s atmosphere. The Leonids are made of dust left behind by the Comet, Tempel-Tuttle.

“Every 33 years this comet makes its orbit around the Sun and as it does, it starts to melt, leaving behind further debris,” says Martina Glass of the Armagh Observatory.

“So, on Earth every 33 years, a spectacular meteor storm occurs when thousands of meteors can be seen throughout the night. The last storm occurred in 2001 and the next is predicted in 2034.”

Glass suggests the best chance to see the meteors this year will be to find a dark sky without light pollution and to look east toward the constellation of Leo: “This shower is named after Leo as the meteors appear to radiate from this part of the night sky. Leo will be to the left and just below the moon in the sky.

Nothing focuses the mind more, apparently, than the prospect of God’s judgement

“Typically, you can expect to see 15-20 meteors per hour, however the moon will make them more difficult to spot. You can also expect to see more meteors than normal a few days before and after the peak. Hopefully the night sky will be clear, and we will be fortunate to see some of nature’s fireworks this month.”

Moore says Astronomy Ireland is hoping stargazers will report to astronomy.ie how many meteors they see every 15 minutes.

“Your observations will have scientific value,” he says, “as people from all over the world will be reporting their experiences.”

If you stay up to count the Leonids this year, perhaps you might remember Young, an old woman dead almost a century now, but also a little girl preserved in the amber of history, a small child who couldn’t know the brutality and misery of the years ahead.

For much of Young’s life she would be considered – in the eyes of the society into which she was born – no better than a farm animal, a human being who could be worked or beaten to death, or raped by her “owners”, or forced to “breed” with other slaves.

Thanks to Young’s great-great granddaughter, we know a little of her life.

Walton-Raji reckons Young was born around 1826, making her seven or eight on The Night the Stars Fell; the night the slavers acknowledged that the people they enslaved were people. Nothing focuses the mind more, apparently, than the prospect of God’s judgement.

“Unfortunately,” Walton-Raji writes, “it would be many years before Amanda would be free from enslavement, and she and her parents remained slaves until the Civil War ended.

Young spoke, her great-great granddaughter says, “over and over, till her death in 1920” of that night in November 1833.

Young was 87 when she died.

“When beggars die there are no comets seen,” says Calpurnia in William Shakespeare’s Julius Caesar. “The heavens themselves blaze forth the death of princes.”

History does not record that comets marked Young’s passing, but she made her small mark on history nonetheless.

In the end, we’re all stories, and perhaps Young’s story had a happy ending.

One night, a very long time ago, when Young was a little girl, she looked up to heaven as the stars fell and the world ended, and the white folks begged the black folks for forgiveness.