‘I really want to take the harp off the tax envelope’ 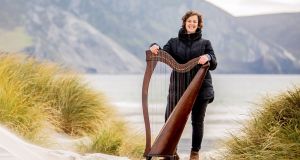 Clare is a county with a rich and varied musical tradition, and a close affinity with the concertina and fiddle in particular. This year its presence is writ large across the collection of TG4 Gradam Ceoil Award recipients, with three of the six musicians honoured hailing from Clare.

The Young Traditional Musician of the Year is Sharon Howley, a fiddle player and cellist from Kilfenora. The Composer of the Year is Miltown Malbay resident, Josephine Marsh, an accordionist and multi-instrumentalist whose tunes have seeped into the bloodstreams of countless musicians. The Lifetime Achievement Award goes to Seamus Connolly, a Killaloe native, now resident in the US, a fiddle player, music collector and composer of wide renown.

As an accordion player, Marsh has quietly carved a reputation for delving deep within the instrument to reveal its subtlety and grace. Her own tunes effortlessly move from sprightly humour to cavernous emotional depths. She’s also an adept multi-instrumentalist whose intimate acquaintance with mandolin, concertina, fiddle, whistle, guitar and banjo makes her a much sought-after music teacher. Now, with over 100 tune compositions to her name, Marsh is planning to publish a book of them next summer. Composition is a privilege, she offers, with a modesty that belies her impact on the repertoires of so many musicians.

“I write mostly on the accordion because I think it’s my instrument for self-expression,” Marsh says. “For me the process is that I have to be in a place of quietness. So I clear the space, have the instruments that I want in the room, do a little meditation beforehand and have a recorder beside me. Some days are good and some not so good. You have to feel an energy. I might write a tune in thanks for something that someone did for me, or I might be commissioned to write. Sometimes it’s just experimental curiosity. For example, because I hadn’t written many polkas before, I might work on that form and have a bit of fun with it.”

Being a multi-instrumentalist allows Marsh to marry each tune with the right instrument. She was recently commissioned by Music Network to write some tunes for a tour she undertook with this year’s Musician of the Year, Mayo harpist Laoise Kelly, fiddle player Tara Breen and sean nós singer Nell Ní Chróinín. It was a challenge she relished.

'It’s recognition from the music community, which is unique, in my opinion. It’s not a competition, and it’s closely linked to the Irish language'

“It’s absolutely an honour to be asked to write tunes,” Marsh says. “For the Music Network tour, I really wanted to write something that would suit the musicians I was playing with. In fact I wanted to write something more formal, a Planxty. I took my time over that, and had to wait for a few weeks for that to come. I experimented with different instruments so that I could get a feel for the sound that might happen on the night. With that commission, it came together and it behaved itself in the end!”

Many of Marsh’s tunes have a strong personal resonance, so playing them allows her to go deep within, to the place from whence they came.

“That’s absolutely true,” she says, “and I would get inspiration from the spirit. If you don’t recognise the spirit in yourself and in other people, all is lost. I really work from love and empathy when I write something. Of course it depends on the mood of the day and the person or event you’re writing for. And that’s what comes out in the music. It has to.”

Donegal native Lillis Ó Laoire is the Traditional Singer of the Year who’s worked extensively with the Donegal and Connemara sean nós singing styles. An academic, lecturing in Roinn na Gaeilge, the School of Languages, Literature and Culture in Galway, Lillis is still aghast at the news of his Gradam Ceoil.

“It’s really humbling when I consider all the great singers that I know: both those that haven’t been nominated previously, and those that have,” he says. “It’s recognition from the music community, which is unique, in my opinion. It’s not a competition, and it’s closely linked to the Irish language. That connection between music and the Irish language is very strong and in my singing I have tried to embody that as well. The Gradam Ceoil recognises the indigenous culture of this island in a way that’s very positive and very modern.”

Ó Laoire has worked hard to strike a balance between his academic work and his singing, which are intimately intertwined.

“It’s great to get that recognition as an artist,” he says. “As well as having an academic identity. Sometimes I feel that they’re quite separate, because the art emphasises the absolute embodiment of this music, but as a scholar you wouldn’t have to know the text of a song off by heart to recite it. As an artist those texts are within you, and you have to try to get them out in a way that’s appealing to others. You have to let it be. Being is important rather than knowing.

“And that’s how it was in the old days. They didn’t have books and they didn’t write the songs down. They had to remember them and their heads were their libraries, if you like.”

Ó Laoire’s singing commands a space like few others. It makes listening, even in the melée of the modern world, the most natural thing in the world.

“There’s so much interference now, in that we’re all connected and on social media and so on,” Ó Laoire says. “So it’s important to create that still space amid the tumult. And you have to create it. It’s a sacred precinct, like going to a religious service. It’s quite spiritual when that happens, and that’s why people are moved. I sing a lot at funerals and I like singing at funerals, because people are in the solemn frame of mind. They need that space to reflect, to be, to hear the music.”

Harpist and founder of the Achill International Harp Festival, Laoise Kelly is the Traditional Musician of the Year.

“I’m just so delighted for the harp. Its time has come,” Kelly says, on the phone from her home on Achill Island. “I can’t express how grateful I am. But for the harp most of all. It’s fantastic. And for all my great music teachers who gave so generously along my path.”

Kelly’s great passion is for pushing the harp to find its outer limits – and not being afraid to go there. She looks to Scotland, where the harp has been thriving amid a vibrant traditional music scene that receives extensive state support. South America too, can show the way when it comes to excavating more from our national instrument, she believes.

“Take Paraguay,” says Kelly. “They have these amazing players who use a percussive bass to enhance their melodies and their singing. Or Cape Breton, where you hear great funky accompaniment to fiddle music. A lot of South American harpers play with their nails on their right hand. I play with my nails with my melody hand and I find that it cuts through the tunes a bit better. All these things have seeped into me over the years. That’s my great fortune to have travelled and to hear these things.”

And the future? What might it hold for the harp, Kelly’s beloved, and our national instrument?

“I’d love to see Ireland more proud of our national instrument,” she says. “I think we have a long way to go. The popularity has grown but I’d love if the ordinary person on the street was really proud that we have a musical instrument as our national symbol.

“I really want to take the harp off the tax envelope. People laugh when I bring this up. When I get the brown envelope with the harp on it, I say that four letter word. That is very real. So at a very subliminal level, it is doing something negative to the harp. Why aren’t we doing something to counteract that? The government should be bringing a harp player with them everywhere they go in the world, because we have tons of brilliant harpers.”

TG4 Gradam Ceoil gala concert and award ceremony will take place in The Waterfront Hall, Belfast on Sunday, February 23rd, 2020 and will be broadcast live on TG4.