The Spice Girls are back. Brexit’s gonna be all right 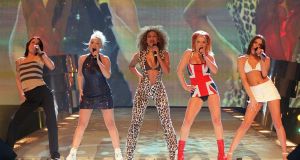 Remember that party you held in your club with all those fusty old colonels and snooty dames? Remember how it was gatecrashed by those loud young women who kept introducing themselves in song and forcing your anachronistic chums to boogie and be less uptight?

And then they jumped into a big red London bus and drove away. Well, that was The Spice Girls and they made you look like a prize fool.

Now, four of the five of them are back to tour their blighted nation, before, as is inevitable, the Tories ban music

But young people know nothing. Let me give you a history lesson. It was the 1990s. Francis Fukuyama was in the charts, meaningless third way politics was on the rise and, blind to their own historical atrocities, Brits were sticking Union Jacks on everything, dismantling the welfare state and preparing the ground for a populist descent into anarchy (looks at watch) around about now. The Spice Girls were/are a group of bolshie young popstresses who advocated ecologically friendly “girl power”, acclaimed friendship as a model for government and demonstrated their distinct personalities in diverse and colourful costumes. They had famously struck out on their own, rejecting the nefarious intentions of their managers James Bond (Roger Moore) and Withnail from Withnail and I (Richard E Grant . . . I’m basing some of this information on the film Spiceworld) and they had a striking message about self-confidence and life-spicening.

Like the Smurfs, the Spice Girls had a naming formula that added a unique personal characteristic to a generic group identity (Grouchy, Brainy, Ginger, Posh, Papa) and they could also combine together to become more than the sum of their parts, like the robot Voltron, the EU or fourth-wave feminism.

Their songs included Viva Forever, a triumphal rumination on infinity, and 2 Become 1, a song which endorsed safe sex but also, unfortunately, unsafe maths. (“HOW CAN 2 BECOME 1?” you yelled. “THERE’S NO MATHEMATICAL DETAIL IN THIS SONG.”)

Like King Arthur and the Milibands, The Spice Girls eventually retreated to slumber beneath Stonehenge to be called when their country needed them. Now, four of the five of them are back to tour their blighted nation, before, as is inevitable, the Tories ban music. I’m pretty excited about it, to be honest with you.

The Spice Girls are:

Baby Spice did not go “full baby” by wearing a bonnet, insisting on being pushed around in a pram and saying “goo goo, ga ga” instead of human words. Instead, Baby Spice wafted around as an infantilised adult in pigtails. Personally I feel that this speaks to a striking lack of commitment on the part of Emma Bunton, and she instantly became my least favourite Spice Girl.

The second-best Spice Girl. She liked to cosplay as a sexy flag. That flag was the Union Jack but it may by now just be the cross of St George or, depending on how Brexit pans out, a dishcloth that’s on fire.

Ginger has the distinction of being

a) named after an actual spice that can be put on food.

b) a little older than the other Spices with a bit more showbiz experience (she could occasionally be prevailed upon to whip out her banjo and do a nifty version of My Old Man’s a Dustman, as she had formerly done on the vaudeville stages of Edwardian London).

c) a fan of Margaret Thatcher, who she proclaimed to be the first Spice Girl, to the horror of Mel C who proclaimed Thatcher to be a “complete prick”.

The best Spice Girl, for the reason given in the last paragraph, but also because she could do somersaults and was forced to wear a bad tracksuit and a terrible ponytail to make her more relatable to people with terrible clothes (see byline picture). She could also really sing. Unlike . . .

Posh Spice brought a bit of class consciousness to the band. However, if she had spent less time yammering on about redistribution of wealth and the condition of the working man and more time on her actual dance moves and singing, she might have achieved more in life. Instead she had to make do with marriage to that hideous, grotesque freak, David Beckham. Ugh, even contemplating his misshapen mug from afar makes me nauseous. Worse still, Victoria has chosen not to return for the Spice Girls reunion, staying instead within the boundaries of the hellish life she has created for herself with Beckham and their damned, doomed offspring.

Scary Spice aka Mel B

The second of the Spice Mels and not actually as scary as Mel from Mel-and-Sue or Mel Gibson. She seems quite nice, really.

Mel A lives across several dimensions at once and has, delightfully, the legs of a huge spider. Mel K is a type of soup

She had scribbles for eyes and stood at the edge of the stage being see-through in a flowing white robe, pointing her long finger at you and screaming the exact date and time of your death. Only you could see her and she still haunts your dreams and consumes your soul. She is certainly not your favourite Spice Girl. Your favourite Spice Girl is Splodge.

A sentient, shape-shifting jelly with a heart of gold and a mischievous streak. I’m not sure Splodge is made of spice. It certainly has no soul and it’s unclear why it came to our realm. Nonetheless Splodge’s japes have triggered many a wacky adventure for The Spice Girls and we love it, no matter what it is or how toxic its gases are to the human respiratory system.

Mels A to Z excluding B & C

Before hitting paydirt with Mels B & C, the ex-Soviet scientists working on the Mel Project produced an alphabet’s worth of Mels that mocked God’s laws and craved oblivion. Mels A to Z (excluding B & C) would occasionally hop, slither and gambol out from the backstage area of Spice Girls concerts before being cattle-prodded back to their quarters by terrified road crew. It’s an interesting group, to be fair. Mel A lives across several dimensions at once and has, delightfully, the legs of a huge spider. Mel K is a type of soup. Mel P went on to become leader of the Tory Party. Most of the secondary Mels will have become familiar to you over the decades as contestants in television singing competitions and parliamentary elections.

Because the implied promise of the Spice Girls was that you too could be their friend, an honorary girl-powered Spice chum, who could hang out with them forever in their garden, which is paradise. Yes, this was a lovely thought. But seriously, take a good look at yourself, a-jigging and a-crooning to Wannabe in the privacy of your open-plan office. Does that really seem likely?