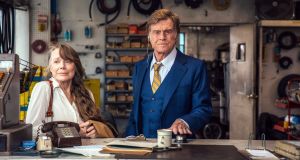 Sissy Spacek and Robert Redford in The Old Man & The Gun

The wise old lady of Irish film festivals is back with her strongest programme in some years. Founded in 1956, the Cork Film Festival has had its giddy ups and ferocious downs, but current festival programmer Michael Hayden has really delivered the goods this season. As ever, the event programmes an enticing series of shorts. Many are the Irish auteurs who began their careers with a screening by the Lee.

The 63rd edition has, however, not spared on high-profile features. Few tickets will be hotter than those for the Irish premiere of Yorgos Lanthimos’s The Favourite at The Everyman on Saturday night. The Greek director’s historical comedy – an Irish production from Element Pictures – features Olivia Colman, Rachel Weisz and Emma Stone in a tale of shenanigans at the court of Queen Anne. It won two prizes at the Venice Film Festival, and Oscar nominations will abound.

Also on the awards season trail is David Lowery’s The Old Man and the Gun. Robert Redford, allegedly in his last role, stars in the true story of career criminal Forrest Tucker. Lowery, coming off Pete’s Dragon and A Ghost Story, hasn’t directed a bad film yet.

Hayden and his team have also secured the first domestic screening for the big Irish breakout from the Toronto International Film Festival. Float Like a Butterfly, from proud Corkonian Carmel Winters, stars Hazel Doupe as a Traveller who, striving to get by in Ireland of the 1960s, takes her inspiration from Muhammad Ali. The film followed in the footsteps of classics such as Steve McQueen’s Hunger by taking the Fipresci Discovery Prize at Toronto International Film Festival. Expect a triumphant homecoming for all concerned as Float Like a Butterfly opens the festival.

Also fresh from Toronto is Peter Strickland’s spooky, cheeky, transgressive In Fabric. As he did in Berberian Sound Studio and The Duke of Burgundy, the director immerses us in the quirks and fetishes of 1970s European horror. Marianne Jean-Baptiste stars as a divorcee whose life turns peculiar when she comes across an apparently haunted dress. There is a great deal of those fondly remembered Amicus anthology films in Strickland’s lavish provocation.

The event catches some wonders from this year’s Cannes Film Festival before they make their way into the nation’s cinemas. By one, frequently used measure, Lee Chang-dong’s Burning registered as the most positively reviewed film of the past 20 years at Cannes 2018. Expanded hugely from a story by Haruki Murakami, the Korean film details the tensions in an increasingly dangerous romantic triangle. There are riches in here.

Also making its way from the south of France is Ciro Guerra and Cristina Gallego’s Birds of Passage. The follow-up to Guerra’s Embrace of the Serpent weaves mythology in with knuckle-shattering action as it takes us through several decades of the drug wars in the directors’ native Colombia. A cult in the making.

Few films at Cork will generate more emotional responses than Nadine Labaki’s Capernaum. The film, featuring the most extraordinary child performances of recent times, takes us among the poorest of the poor in contemporary Lebanon. Capernaum recalls the Italian neo-realists at their best while delivering a film that is utterly of the moment. Disturbing and crowd-pleasing (if that makes any sense).

Keep an eye open for some special events. FW Murnau’s Nosferatu will play at St Fin Barre’s Cathedral with live organ accompaniment. The great composer Roger Doyle is in town for the screening of Brian Lally’s doc The Curious Works of Roger Doyle. The film-maker Pat Murphy will be in conversation. Then there’s Alan Butler’s On Exactitude in Science, which accommodates Godfrey Reggio’s Koyaanisqatsi to the world of Grand Theft Auto. Sounds completely awesome.