‘The first day I was a ball of nerves’: Paul Dano’s directorial debut 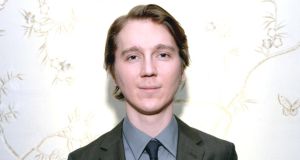 “This is a new frontier for us,” says Paul Dano. “Managing work and life. It has ended up being a really interesting fall for us. Zoe has the Coen brothers’ film coming out. I have a Showtime series coming out. We couldn’t have predicted all the release dates would coincide. It’s a lot of hustle. It’s been a bit mad. But it’s a good mad.”

Speaking on the phone from his home in New York, the 34-year-old actor and Zoe Kazan, his domestic partner for 11 years, are audibly packing up their three-month-old daughter, airport-bound.

He hasn’t listed his upcoming Broadway revival of Sam Shepard’s True West, which will see him treading the boards alongside Ethan Hawke. Nor have we got as far as Wildlife, his directorial debut and a long labour of love. He first read Richard Ford’s source novel, a domestic drama about a family imploding in 1960s Montana, in 2011 and found he couldn’t stop thinking about it. He wrote to the author to enquire about the rights and received an extraordinarily generous response.

The book reminded me, first of all, of my parents, my grandparents

“I’m grateful to you for your interest in my book,” wrote the Pulitzer Prize winning author of The Sportswriter. “But I should also say this in hopes of actually encouraging you. My book is my book. Your picture, were you to make it, is your picture. Your moviemaker’s fidelity to my novel is of no great concern to me. Establish your own values, means, goal. Leave the book behind so it doesn’t get in the way.”

“It was very generous”, says Dano. “It’s also, frankly, very smart. There’s a person who knows that just translating a book doesn’t necessarily make a good film or something that stands on its own.”

The attention to detail on display in Paul Dano’s directorial debut Wildlife is something to behold. The film stars Jake Gyllenhaal and Carey Mulligan as dissatisfied marrieds on the wrong side of the American Dream. Their 14-year-old son, played by Better Watch Out’s Ed Oxenbould, watches helplessly as his father, Jerry, loses his job on a golf course, hits the bottle, and then, inexplicably, leaves home to fight wildfires in Canada. Something subsequently seems to snap in Jeanette (Mulligan), the wife he leaves behind, as she embarks, confused and skittishly, on an affair with a local businessman (Bob Camp).

“The book reminded me, first of all, of my parents, my grandparents,” says Dano. “There was something of them in there. There was also something both personal and archetypal in there. I was really intoxicated by that idea. The mystery of who our parents are. As kids crossing over the threshold to adulthood and having a certain amount of access to different parts of the adult world, our parents can seem different. I think these people have been good parents until now. But they have not been living in the present; they’ve instead been living an idea of what their life was supposed to me. There’s an element of ‘the American dream’ in there that I love. And what happens when you realise that you’re not going to get there.”

He co-wrote the delicate screenplay with Zoe Kazan, herself a seasoned scriptwriter, having authored Ruby Sparks, a 2012 rom-com directed by Jonathan Dayton and Valerie Faris, and starring Kazan and Dano. When Dano showed his first draft to Kazan, he was disappointed to find notes on every page. She offered to re-draft and a process began.

“We never sat down and wrote together,” he says. “That wasn’t something we even talked about. How we worked just came about, naturally. We do get along, of course! But passing back and forth allowed us to each have our own process and then each have a script editor, in each other. We’d talk about it and challenge it and ask questions and then one of us would take it and do a pass.”

There are so many small details that you notice and that helps to give you confidence, to be yourself

Having previously been directed by Paul Thomas Anderson, Bong Joon-ho, Rebecca Miller, Richard Linklater, Rian Johnson, Ang Lee, Kelly Reichardt, Steve McQueen, Denis Villeneuve, Spike Jonze, and So Yong Kim, Dano has not been short of mentors. Indeed, it’s hard to imagine a starrier film school. He is also, to use his phrase, “a total film dork” and a huge fan of Robert Bresson and Yasujiro Ozu – both are evident influences on Wildfire.

“Sometimes you’re too caught up in your own work to pay too much attention,” says Dano. “So it’s certainly not something I thought about consciously on set. But there are things I’ve picked up on over the years and thought: ‘Oh wow, that’s great’.

“A lot of it has been taking the spirit, the work ethic, the care, the ferocity. Or seeing a director waiting for something to be right. It’s important to know that you can do that. Seeing somebody take their time to do an insert shot with no actors in it. Because they know how they’re going to use it later on. There are so many small details that you notice and that helps to give you confidence, to be yourself.”

“Well, the first day I was a ball of nerves,” says Dano. “But pretty quickly, because of time constraints and because you’re working shot by shot throughout the day, you have to get on with your job. I spent a lot of years looking forward to doing this and thinking how I wanted my set to feel and how I wanted to work with the actors and crew. So by day two, I was off and running.”

If Wildfire feels like the work of a mature artist that’s probably because, at 34, Dano is just that. By 10, he was interpreting the classics in community theatre.

“Theatre was a new world,” he recalls. “It was an exciting adult world. I remember how kind everyone in theatre was to me, and the sense of family with each play or film. It was like going to summer camp. But I also remember that going to basketball practice was just as important as theatre. It wasn’t until I was 18 and I went to college that I truly decided that I was going to be an actor. I needed to be sure it wasn’t something I just stumbled into.”

Aged 11 he had made the leap from community theatre projects in hometown Wilton, Connecticut to Broadway, where he played alongside George C Scott in a revival of Inherit the Wind.

“Now I wish I had a great story to tell about George C Scott,” he says. “I would love to go back and experience that now that I’m a proper film fan. I could have asked questions about working with Stanley Kubrick. I do recall his presence and the gravel in his voice. It’s pretty cool that I know I was there and that I got to share the stage with him even if I only remember fragments and images.”

Having worked alongside Daniel Day Lewis twice on There Will Be Blood and The Ballad of Jack and Rose, Dano was saddened by news of his retirement. He’s hopeful it might just be temporary.

“I would really miss his work,” he says. “I love his work. It would be hard to think and accept that there won’t be any more.”