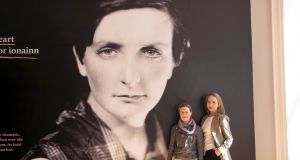 “When all you good citizens of Ireland are reading your Irish Times this morning, you certainly will not have time or attention to give to me. You will be busy with the comedies, farces and savageries of your General Election” – Long Distance by Kate O’Brien, June 16th, 1969

It’s 50 years since Kate O’Brien wrote her Long Distance column in this very newspaper. From a little house in Kent, the Irish novelist’s wide-ranging intellect presciently wondered at issues as diverse as the diminishing butterfly population; Ireland’s “superbly male reaction against independent women”; and the American presidency:

“No one can look at the result of this election with any kind of hope – and I imagine that all the intelligent in the United States can only be in despair about that plight to which their ideal of government has been reduced.” (November 4th, 1968)

I never met Kate O’Brien. She was my grandfather’s older sister and died years before my birth. In her twenties, she wrote a play for a bet which went on to be staged in London’s West End. When she wrote her first novel, a sweeping period drama, it won her a slew of awards and fans. She wrote for the rest of her life and yet today she is far from a household name. Long distant, more like.

Recently I was invited, as a contemporary Irish artist, to curate an exhibition on this 20th-century writer for a new museum dedicated to Irish literature in the heart of Dublin city. The Museum of Literature Ireland (MoLI) asked me to use my theatre background to engage with and reintroduce Kate O’Brien to the public. But first I had to find common ground between us. I didn’t know if she would be relevant today.

Kate O’Brien wrote Long Distance in her 70s. An ageing Irishwoman living in England, she was, in many ways an exile, having had two of her novels banned by the Irish State and, not unlike the current climate for artists in Ireland, saw little prospect of economic security here, despite the nation’s pride in its literary identity. In her Irish Times columns, she cast her gaze home and abroad and revealed opinions that were robustly hers.

A very clear voice rings out from these columns of the last century. At times how it chimes with today is unnerving: “Consider something in which we could be of some use, you in your small corner, and I in mine. I mean Conservation. In this sad year of grace we are all being asked to help in fighting pollution, and in protecting, conserving whatever beauties or amenities may still be left to us wherever we dwell.” She wrote that in 1970.

“Why can’t we feed people on our own planet?” she asked readers on July 21st, 1969 as the Biafran War raged and filmed footage of the ravages of famine was seen for the first time. That question still deserves an answer.

Reading her column from November 1968, during the Vietnam War, I thought of the recent women’s marches, marriage referendum and anti-war rallies: “Why on earth should they not march?” O’Brien asks. “If there are a number of young, and less young, people who wish to manifest their loathing of this senseless war, and are prepared to march through the wet and misery of an October Sunday to make their honourable protest, what is there to panic about?”

Yet there’s evidence of her own panic in her March 1970 column where she demonstrates startling foresight: “Well, society is now confronted with its own conceit of itself. We have been so clever with our detergents and pesticides that we see now that we have endangered, and perhaps even in some sorts destroyed some of the fairest and sweetest adornments of our ordinary human life. For long indeed, without exactly taking in what was happening, one has missed many wild flowers from the hedges.”

She took my breath away writing a few months later about the growing craze for plastic: “Of course we all know there are too many wrappings and packagings in ordinary life, too many ice cream tubs and potato crisp bags; the poor island is almost sinking beneath its monstrous load of debris… on the shores you’ll see dead birds and decaying fish floating in…”

It sets off a clicking View Master reel of contemporary photographs in my mind: plastic-clogged waters, men and women marching, beaches strewn with dead wildlife. She could be writing today.

But, as O’Brien teases in my opening paragraph, will you have the time or attention to give to her? Have we come far enough to acknowledge the relevance of female voices from the past and how we have dismissed them?

Although ageing and uncomfortable both physically and economically, O’Brien’s life of travel and learning fuelled her until the end. She was confident in her voice and in her beliefs; if she saw injustice she called it out. These columns don’t make her a prophet or an activist but undoubtedly she was a believer in the power of the people.

All of her writing, both fictional and non-fictional, champions the rights of the individual to equality, to freedom and to their unique voice. Over the next 50 years, it is yet to be seen if humanity will travel a longer distance than we have over the last half century. Kate O’Brien, at least, remains hopeful:

“As they moved about in throngs one took from their passing voices and from their grace and vitality a great breath of hope for Ireland. For here seemed to be young people in pursuit of ideas, who were not afraid of anything, and who were looking to the future.” (April 7th, 1969)
Kate O’Brien: Arrow to the Heart closes next Wednesday January 29th at MoLI, The Museum of Literature Ireland, Newman House, Dublin 2. Kathy Rose O’Brien will be speaking at the Limerick Literary Festival in honour of Kate O’Brien on February 21st, 2020