Folk Awards: Steve Cooney revels in the achievement of a lifetime 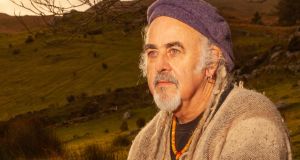 The world has turned on its axis. Just as it has shrunk beneath the pall of a virus that knows no bounds, so too has our own folk music fraternity trained its collective gaze beyond the horizon. The recipient of this year’s RTÉ Radio 1 Folk Award in the Lifetime Achievement category cut his teeth playing with cult American singer-songwriter Sugar Man (born Sixto Rodriguez), played bass with Chuck Berry, and reinvented an entire style of traditional music accompaniment with his guitar.

Steve Cooney is an erudite musician, composer and producer who wears his multiple achievements lightly. He also features in no fewer than three of the voting categories of this year’s awards: Best Folk Instrumentalist, Best Folk Album (for Ceol Ársa Cláirsí: Tunes of the Irish Harpers for Solo Guitar) and Best Traditional Track of the Year (Turlough O’Carolan’s Eleanor Plunkett).

News of this lifetime achievement award couldn’t have come at a better time.

“My reaction was surprise, shock and elation,” Cooney muses from his home in Donegal, where he’s using this period of enforced restrictions to put the finishing touches on his forthcoming album, Rhapsody and Rascality. “Because I came from Australia it’s even more of an honour. It’s the kind of thing, dare I say it, that you tend to get at the end of your career. But I intend to go on for another decade or so if I can. It put things in perspective for me, and makes me realise that what I have worked at has been appreciated by people – so I’m very grateful.”

Nuala O’Connor, a member of the executive steering committee for the Folk Awards acknowledges that “it is hard to describe Steve Cooney in words, but ‘genius possessed of a towering musical intelligence’ comes close. It is a matter of great fortune for this country and its traditional music that Steve was directed here by some powerful ancestral force acting on his psyche.

“All of this is true. But it is only when you listen to him that you know and feel its truth. To hear him play and be in his presence is always a profound experience for listener and player alike. This Lifetime Achievement Award is an acknowledgment of Steve’s deep abiding commitment to his art and the glories that this has produced for all our souls’ enrichment.”

Cooney’s indefatigable sense of adventure is writ large in his work. He arrived in Ireland more than 40 years ago, after the Aboriginal tribal elders with whom he was living exhorted him to explore his Irish roots through our language, music, poetry, song and draíocht.

Since then Cooney has embraced every facet of Irish cultural life with a sense of childlike adventure that is as infectious as it is modest, culminating with the album Meitheal (1996), his groundbreaking collaboration with Seamus Begley.

Never a man to seek out the limelight, he is nonetheless  in constant demand. His driving percussive guitar has propelled the polkas and slides of west Kerry into the furthest reaches of the stratosphere, and his delicate guitar arrangements of 19th-century harp tunes from O’Carolan and others has awakened an appetite in a whole new generation of guitarists to delve deep beneath the skin of the music.

Such riches are rooted in a lifelong affinity with music. Cooney’s earliest musical memory is still crystal clear.

“My dad played guitar. I remember that his guitar was on the floor and I was banging it from the headstock down to the sound hole. I must have been about three, I suppose. I was banging the strings, which were getting louder, and I remember saying in my head: ‘Here comes the train, here comes the train’. And the next thing I heard was, ‘Leave your father’s guitar alone!’ So my dad got me a ukulele then, when I was three.”

Having heard reverie-like recollections of the fleadh in Donegal from his Australian musician friends in the 1970s, where tales were told of an eight-year-old boy playing tunes at 3am (that boy was Dermot Byrne, later a member of Altan), Cooney has played a central role in Stockton’s Wing and in Liam O’Flynn’s band The Piper’s Call, as well as countless other duos, trios and ensembles.

His PhD focused on the creation of a musical notation system based on the circular clock face: a system he believes is far more intuitive than conventional musical notation. And he has a passionate desire to see traditional musicians come together to collectively bargain and gain an economic foothold in a precarious musical world.

Despite Cooney’s delight at the news of this award, he’s wary of attaching weight to the opinions of others when it comes to his artistic output.

Despite having lost all of his live gigs as a result of Covid-19, Cooney is busier than ever, and will be releasing Rhapsody and Rascality (its title borrowed from a tribute to him written by Seamus Heaney) to coincide with the announcement of this award. It’s a freewheeling, wide-angle lens of a collection, fusing Irish traditional, blues and world music to dramatic effect. Where else would you encounter the Canon Goodman collection alongside the tunes of Patrick O’Keeffe and Maurice Ravel?

“I suspect it’s going to be controversial,” he laughs. “A lot of people won’t like it, because I’ve been taking a lot of liberties with sacred cows. I’m going to get into trouble with it. That’s one of the reasons I did the harp record first: I was getting my retaliation in first. That was what you might call a super trad record, and I figured they couldn’t fault me after that!”

Cooney’s taken flight under lockdown, and is unapologetic about the sense of urgency he feels.

“I’ve had a series of goals that I’ve wanted to achieve for many years,” he says. “One was creating an album of guitar music based on harp tunes, and another was a fusion music project with electric guitar. I also want to do choral and orchestra music. So I’m very driven to achieve what I’ve always dreamed about doing.

“When you’re on the road all the time, you don’t have much time to focus on your projects, but now with Covid, I’ve just been working very hard to achieve what you might call a kind of bucket list. It’s not so much that I want to achieve, but I want to test hypotheses. It’s a race to the line now. If this thing [Covid] takes me out, I want to have a bunch of stuff that I’ve released.

“Sometimes the road can drain you, but with the lockdown I’ve been able to work and work and work. And I’m enjoying it, to be honest with you.”

The RTÉ Radio 1 Folk Awards will be broadcast live on RTÉ Radio 1 on Thursday, November 26th, at 8pm, with presenters Ruth Smith and John Creedon and will include new performances from many acclaimed folk artists