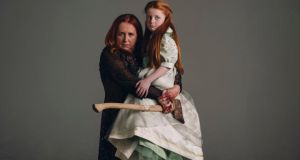 Project Arts Centre, Dublin
★★★☆☆
There may be such a thing as an art of suffering. To some that will sound like a determination to wallow in misery, as though practice makes perfect. But the singer Mary Coughlan and the contemporary theatremakers Brokentalkers know that it requires something else: a transformation. The weight of another person’s painful experience can crush us – or, worse, numb us – but art can so thoroughly reconceive trauma that it moves us in unanticipated ways.

That precise effect is laced throughout Woman Undone, Coughlan’s unconventional collaboration with the directors Gary Keegan and Feidlim Cannon, together mining the singer’s fraught personal biography for its substance and translating it into startling and disarming imagery. That is Brokentalkers’ stock-in-trade, often reaching an uncanny balance between a pleasing visual joke and an affecting nightmare.

It also carries certain risks, however, of occupying you more with their devices than with the meanings they smuggle. Midway through this protean performance, for instance, I found myself watching a young woman, dressed like a horse wrangler, blowing a plume of bubbles over the supine body of a dancer in a bathtub, admiring the carefully coded aesthetics of what was actually the depiction of a harrowing sexual assault.

That may be emblematic of this elaborately collaborative approach, which focuses on the traumatic and formative arc of Coughlan’s youth, breaking the story into narrative shards that the performers piece together in angular and haunting choral song. Like one shattered glass wall in Sabine Dargent’s set, depicting the frozen moment of a pivotal car crash, symbols abound and multiply.

Coughlan doesn’t seem fully present, less the star of the show, or even an ensemble member, than an assistant, and sometimes just a watcher

That car (the same model that Coughlan crashed, almost fatally, at the age of 19) doubles as a womb, from which the dancer Erin O’Reilly emerges, at first stumbling like a vulnerable foal, and soon to be broken by a range of men. A disapproving father in a soldier’s uniform, the cajoling, abusive wrangler, a sternly instructing monsignor, and a gallery of naive boyfriends, all archly played by the singing group Mongoose in a parody of gender.

On stage Coughlan’s role is harder to determine, alternatively encouraging her alter ego’s tormentors and offering the young woman personal succour. That contradiction may be the point: Coughlan is equally driven towards acts of creation and destruction, exalting the power of music, as much as the obliteration of alcohol and narcotics – both the making and the undoing of her.

The show bears its own critique: it features little of Coughlan’s political example, or even the specifics of her career, the performers point out, preferring the language of therapy. “If she was held,” the voices sing over Valgeir Sigurðsson’s sparing compositions, “she wouldn’t need to guess who she is, and where she’s going.”

That can make Coughlan’s story seem troublingly generic, rationed out along a familiar trajectory of abuse, self-medication, self-harm and, eventually, recovery. Even the show remonstrates with itself, pausing to ask Coughlan why her mother features so little in these recollections. “She was absent,” Coughlan replies. “Certainly from all this shit.”

Yet Coughlan herself doesn’t seem fully present, either, less the star of the show (which will disappoint fans), or even an ensemble member, than an assistant, and sometimes just a watcher, to a heavily stylised postdramatic re-enactment. That she is a woman transformed is Mary Coughlan’s story of survival. Here, for better or worse, she seems like a woman removed.