To be a Machine review: Experimental format well-suited to play’s core theme 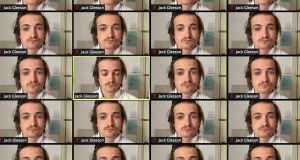 Jack Gleeson in Dead Centre’sTo Be a Machine as part of Dublin Theatre Festival 2020.

We can hardly blame the creators of this busy one-man show for endlessly worrying about whether the finished work counts as theatre. Much effort is made to satisfy stretched definitions of the form. The audience members are asked to upload video of themselves - staring, laughing, sleeping - and the rendered images, each transferred to tablet, are scattered about the auditorium in Project Arts Centre. Sitting at home before a streaming computer, you cannot control your avatar, but, as a few reverse shots clarify (apologies for cinematic rather than theatrical jargon), you are there in some cybernetic sense.

Jack Gleeson, best known as the horrid Joffrey in Game of Thrones, spends much of the brief running time pondering the ups and downs of this hybrid form. You can go to the lavatory with less inconvenience. Maybe you are on the lavatory right now. “Try to forget the screen,” he says before - in my case, anyway - a brief buffering issue (was that deliberate?) made that task impossible.

All this might have proved exhausting if the self-conscious experiments did not complement the play’s core theme. Happily, the experimental format is well-suited to an exploration of transhumanism. Adapted from Mark O’Connell’s acclaimed non-fiction book, To be a Machine, a Dead Centre production, goes among those scientists, entrepreneurs and philosophers who believe technology will allow consciousness to survive the body’s passing. Somewhere in Arizona, a company called Alcor keeps an array of upended heads in Perspex containers. The comparison with the two-dimensional heads scattered about the Project’s auditorium is unavoidable. The digitally assisted survival of this theatre piece in the time of Covid acts as a neat metaphor for the process by which computers may allow our thought streams to outlast physical annihilation.

Playing a tweaked version of O’Connell, Gleeson sometimes struggles to energise a monologue that carries a few stubborn reminders of its origins in long-form prose. But the technological flourishes keep the show engaging throughout.

Questions remain about its status as theatre. At one point, Gleeson, employing the famous Turing test, seeks to discover if the audience is really out there? We could ask him the same question. We know the show is live because we have been told as much, but, for those of us not having our comments in the chat-box read out, little on screen distinguishes it from a one-take movie. The piece’s creators almost certainly savour that ambiguity.