Signatories review: an imagined truth about key figures in the Rising 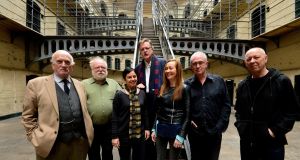 This production’s public birth was on the exact weekend of the Rising centenary, in the same chilling gaol where many met their end after a six-day madness. The setting added a poignancy and depth of meaning to the words and the performances, but those words and performances also stand powerfully alone.

Its genesis and the writers’ link is UCD, marking the college’s connections to the Rising. So we find eight strikingly different considerations of eight individuals – the seven signatories of the proclamation and nurse Elizabeth O’Farrell, the go-between negotiating the surrender.

This is not history but theatre that proposes an imagined truth about its real characters, walking the tightrope between fact and art. The disparate individuals are delineated distinctively, but director Patrick Mason marries them seamlessly, so the styles echo different takes and personal stories. The monologues take place in different areas in the central chamber of the gaol, and the audience moves to follow the light and action and sound, each monologue segueing quickly from one to the other without pause, so the overall effect is passionate and cumulative.

Most are set in the gaol before execution. Emma Donoghue’s Elizabeth O’Farrell (Barbara Brennan) opens and sets a more recent perspective as the sole survivor of the eight (she died in 1957). Recalling events as an older woman, it both evokes mounting excitement as O’Farrell darts around Dublin streets delivering messages to the rebels, aware the next bullet might have her name on it, and reflects: “What did I do, that I have to live so long, men’s faces blurred in my head, but the smell of blood still fresh?”.

We meet Patrick Pearse (Peter Gaynor) in his cell, in Thomas Kilroy’s powerful piece, haunted by childhood memories of his English father and more recent recall of a young man in the GPO who wants to leave, to live and “so’s I can fight in the future”.

Two of the signatories’ stories are rendered by women. Éilís Ní Dhuibhne’s Sean MacDiarmada is mediated through his fiancée, the spirited Min Ryan (Roseanna Purcell), who was with him in his cell during his last hours, and who we meet some time later, newly engaged, and recalling with pathos and humour that night with MacDiarmada, portrayed as a ladies’ man finding mementoes for his many girlfriends.

Hugo Hamilton’s James Connolly is at a remove, from the perspective of a young woman (Lisa Dwyer Hogg) who recalls another who loved Connolly posthumously; its tangential take evokes a man with quirks and flaws who has been transformed into an almost saintly icon.

Frank McGuinness’s Éamonn Ceannt (Ronan Leahy) is more straightforward: Ceannt in his cell in a stream-of-conciousness about the life-and-death decisions made almost on the spin of a coin, mentally unraveling as his hour approaches.

Thomas Clarke (Joe Taylor) by Rachel Fehilly almost lightens the mood as a bluff older man reconciled to his fate and already aware of how history will view him. Joseph O’Connor’s Joseph Mary Plunkett (Shane O’Reilly) addresses the audience and is written from a distance, with some contemporary commentary, mixing humour and bitterness.

Marina Carr’s Thomas McDonagh (Stephen Jones) has a strong narrative line, from idealistic young poet and (UCD) lecturer to hero standing before the firing squad, snatching a small victory by offering his last cigarettes to the soldiers about to kill him. “One young man blesses himself, sighs. ‘It’s okay,’ I say to him, ‘courage, young man, all in a day’s work’.”

This is an ambitious and significant project from Verdant Productions and UCD. The disparate pieces are melded into a theatrical whole, confidently and movingly. As darkness falls on Kilmainham Gaol the air of ancient despair and heartbreak that imbues the building intensifies and there is an unnerving sense that weaving around us in the gloom are the ghosts of those who died here, listening to every word.