Dublin Theatre Festival: This perfectly paced production for ages eight and up retells the Irish folk tale for a new audience 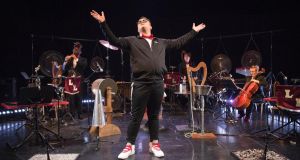 The Ark
★★★★☆
King Labhraidh Loingseach has a secret hiding underneath his grey bob. If you listen very carefully Thommas Kane Byrne will tell you what it is. He will tease you first, though, with just a few hints about the murine appendages lurking underneath the king’s freshly cut bonce.

Written and directed by Wayne Jordan, The Haircut! gives the Irish folk tale a contemporary makeover, setting the story in a world quite like our own, where a young boy, Kwame, fights against the colourlessness of the ever-rainy kingdom by colouring outside the lines and sequinning his clothes. When Kwame is chosen as “hairdresser apparent” to the king he must follow the strict code of secrecy surrounding the annual ritual, but the burden proves too much to bear.

Jordan’s script is full of fun puns, and the production is perfectly paced. There is never a moment in its 60 minutes when the story doesn’t hold.

The key instrument is Thommas Kane Byrne’s voice, which slides up and down the octaves as he slips in and out of  the various characters to hilarious effect

Sarah Bacon’s set turns the spotlight on Tom Lane’s score, a key component of the storytelling, and the musicians who perform it. Four large gongs provide a visual backdrop against which the percussionist Nicola Ciccarelli can dance as he wields the mallets for his giant marimba, flanked by Lioba Petrie on cello and Berginald Rash on clarinet.

The visual centrepiece, however, is the barber’s thronelike chair and the small sink and hairdryer, which Kane Byrne uses to enrich the instrumental score with found sounds. For the key instrument in this tale’s retelling is Kane Byrne’s supple voice, which slides up and down the octaves as he slips in and out of the various characters, juxtaposing shrill and smoky tones for hilarious effect. Dressed in a black-tie version of an Adidas tracksuit, he sports his own curly pompadour. It’s just a shame he doesn’t break into song.

The recommended age of eight-plus bears out, both in the verbal emphasis and in the concentrated nature of this experiment in music and theatrical storytelling. Adults will enjoy it as much as their young companions, however. The Haircut! proves to be a win-win for all comers to the kingdom.

Runs at The Ark until Saturday, November 2nd, as part of Dublin Theatre Festival