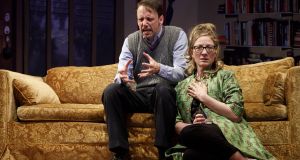 New Irish productions of Shakespearean classics, along with interpretations of James Joyce and Seán O’Casey and contemporary work from Ireland, Europe and the US, feature in the programme for this year’s Dublin Theatre Festival, which was announced on Tuesday. The festival, which runs from September 27th to October 14th, includes drama, ballet and opera aimed at children, young people and adults. A strong international line-up includes work from the US, Australia, Belgium, Poland, Netherlands and the UK alongside a wide-ranging programme from Irish theatre-makers.

Oscar-nominated actor Ruth Negga leads the cast in the title role of Hamlet at the Gate, directed by critically acclaimed South African Yael Farber, while Shakespeare will also feature at the Abbey, with Druid continuing its exploration of the writer’s work with DruidShakespeare: Richard III.

Brendan Coyle (Downton Abbey, Mary Queen of Scots) returns to the Irish stage for the first time since 2002 for the Irish premiere of Conor McPherson’s St Nicholas, in an intimate new version by the Donmar Warehouse, one of five UK productions on the programme.

Writer/director Enda Walsh is reunited with the award-winning team behind the opera The Second Violinist for a new production of Bluebeard’s Castle, Béla Bartók’s early 20th-century reimagining of the tale of Bluebeard. The Irish National Opera production sees Paula Murrihy return home for a rare performance in Ireland, alongside Joshua Bloom.

The award-winning US company Elevator Repair Service, who took the festival by storm 10 years ago with Gatz, returns with a new play, Everyone’s Fine With Virginia Woolf, described as a loving homage and fierce feminist take-down of Edward Albee’s 1960s drama Who’s Afraid of Virginia Woolf?. Also from the US, The Fever is a response to the current polarised social and political climate in that country. The festival will also see return visits from companies from Belgium and Poland.

Arthur Miller’s film, The Misfits, is brought to the stage for the first time in a reimagining by Annie Ryan for Corn Exchange. Other Irish productions include Decadent Theatre’s revival of Marina Carr’s award-winning breakthrough play The Mai with a cast led by Derbhle Crotty and the world premiere of Arthur Riordan’s stage adaptation of A Portrait of the Artist as a Young Man, from Rough Magic. ANU and the Abbey Theatre’s The Lost O’Casey, will be performed on the streets of Dublin.

Thirty “hosts” will be paired with 30 leading theatre-makers for 30 new plays performed in houses across Dublin 15, with a selection presented in Draíocht. The festival and The Ark will also present three pieces of theatre for children.

The festival’s Gala Night will celebrate the contribution made to the world of theatre by actor Cillian Murphy, and a Festival+ programme will include work-in-progress showcases, panel discussions and post-show talks.

Festival director Willie White said this year’s programme showcases many different ways that artists use theatre to engage with the world they’re living in. “It’s a world where individuals, communities and the environment are under threat,” he said. “But also one where the desire for human connection is strong and the radical possibilities of imagination burn fiercely against the advancing darkness. A festival is the time to take chances. Go and see something you might not otherwise.”

Priority booking for friends of the festival is now open, while general booking opens on August 14th.