Joyce’s ‘Ulysses’: No Dublin, no pubs, no brothels, so German 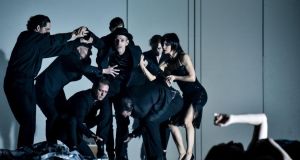 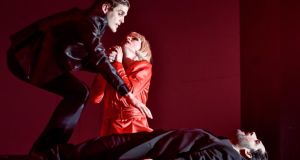 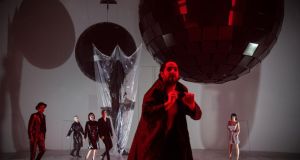 At the bar, an older man who once stayed in Joyce’s Zürich home and loves the book says he has no idea what’s going on

Five minutes into my interview about the new stage production of Ulysses at Berlin’s Deutsches Theater, the director and his leading man have supplied three crucial pieces of information.

First, the evening will be four hours long. Second, neither Dublin nor the main characters will feature. Third, someone’s willy will get an airing during the evening – but they’re not saying whose.

It’s three days before the premiere and my interview with Ulysses director Sebastian Hartmann and actor Ulrich Matthes is skidding off the rails.

“I have left out everything to do with the Dublin milieu, the pubs and the brothels,” says Hartmann, promising a “non-narrative theatre evening with no main figures or exposition”.

Matthes who, like the rest of the cast, created the evening in collaboration with the director, chimes in.

“We haven’t even tried to boil the book down to an essence nor do I feel what we have decided for is arbitrary,” he says. “We try to address the fundamental themes in Joyce – birth, death, love, sex – without attaching them to particular figures but by, instead, throwing them out to the audience’s associative abilities.”

Matthes is almost reassuring thanks to a melodic voice and liquid eyes that has made him acting royalty in Germany.

Irish audiences will be most familiar with his staggering turn as Joseph Goebbels in the 2005 Nazi film Downfall but he appears in seven shows in repertory at the Deutsches Theatre including, for over a decade, Beckett’s Endgame.

He says he still delights in Beckett’s brittle humour and Joyce’s very different humour. When I ask what about these Irish writers’ humour appeals to Germans, he declares that Beckett and Joyce are not Irish but “Weltautoren” – world authors.

The bearish, bearded Hartmann nods in agreement. He will turn 50 this year and is too old to be a German theatre enfant terrible, but he certainly keeps trying.

Three years ago he staged Sean O’Casey’s Purple Dust, but it was so far from the original that the German publisher withdrew the rights for a production described by a critic as a “soul-destroying impertinence”.

Is having Ulysses now in the public domain a liberation? It’s immaterial, says the director.

“By its nature, theatre follows other rules to a book,” he says, and taking a free approach is crucial with Ulysses, given the work’s experimental, stream-of-consciousness style. With his production, he wants audiences members “to be part of something where the Hollywood dramaturgy doesn’t kick in”.

“I’ve never been to Ireland but find Joyce and O’Casey two-faced, in the best sense of the word, with a twinkle in the eye,” he says, warming to his theme. “O’Casey is smirking, Joyce really down and dirty.”

Ulysses, he says, “speaks to every part of my artistic being”.

It’s premiere night, there is no curtain in the Deutsches Theater and the stage is an empty white box but for 10 panels of red, fluorescent light strips making expectant audience faces look like plump chickens in a halogen oven.

A woman in a black-fringed skirt and platform shoes appears to announce: “Dublin is burning. . .” She’s followed by a mime, and a woman who crowd-surfs through the first rows, shouting “I’m drowning. . .”

Near me in the audience, a thirtysomething woman in 1980s glasses chews gum and rocks her head back and forth to a melody only she can hear.

When she starts laughing with delight – she knows someone in the cast – her friends cast her discreet, nervous glances, then start to laugh too. Soon the parade of the Emperor’s new clothes is under way. Two dozen members of Berlin theatre elite are admiring the finery on display as the others sit in silence.

Characters appear on a massive revolve, speaking snatches of familiar Joyce texts. Bloom’s kidney breakfast, trip to the toilet, bedroom visit to Molly and other scenes are mentioned in passing as pieces of a wider text mashup, from Homer to quantum physics.

Instead of the book’s context and confidential tone, the stage Ulysses is an over-reaching intellectual vaudeville of declamatory scenes in a monotonous, self-important staccato.

After an hour a woman near me is nodding off. She opens her eyes briefly – a naked woman onstage has emptied a bucket of gloop over head and scrabbles a plastic sheet – then closes her eyes again with a nod of familiarity.

In the interval, a young woman who knows one of the actors tells a friend she thinks it’s very funny. Her friend says she doesn’t understand it. The first admits: “Neither do I.”

At the bar, an older man who once stayed in Joyce’s Zürich home and loves the book says he too has no idea what’s going on.

”If they have no intention of doing Ulysses, why bother?” he asks. His companion feels she is trapped in an rehearsal where they have yet to discard half the material, adding: “It’s just not at all clear what they’re trying to say.”

As the second half looms, to paraphrase Leopold Bloom, the sting of disregard glowed to weak pleasure within my breast.