Les Misérables review: A refined production of the morality tale 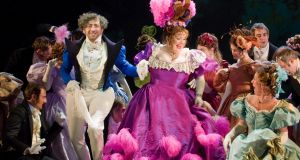 Les Misérables: The ensemble cast move like tiny figures in a game played by the Gods

Bord Gais Energy Theatre
★★★★☆
Victor Hugo is best known as a poet and political activist, and his most famous works – the socially realist Hunchback of Notre Dame and Les Misérables – combine both passions to powerful, transformative effect. This new production of Trevor Nunn and John Caird’s musical adaptation, directed by Laurence Connor and James Powell, introduces us to Hugo’s refined visual imagination, using the paintings and drawings he created during the height of his political activism as a backdrop against which the morality tale unfolds. The projected images create an immersive, cinematic environment against which the moving mechanisms of Matt Kinley’s set can slide and shift to spectacular effect.

Against this mind-blowing mise-en-scène, the ensemble cast move like tiny figures in a game played by the Gods – or the singular Christian God – whose guiding spirit sees our hero Jean Valjean, keep to a path of true promise and moral rectitude, despite the opportunities for vengeance offered to him. Killian Donnelly brings a grounded gravitas to Valjean, as he steers a righteous path through decades of suffering, while his vocal range ploughs through Claude-Michel Schönberg’s wide-ranging score with ease, from the deep bassy notes of What Have I Done? to the contrasting soprano highs of Bring Him Home. As his nemesis Inspector Javert, Nic Greenshields commands the stage in Stars, as well as in his vocal duels with Valjean, as their contrasting worldviews bring them into a conflict that lasts the passage of time. Vocal work in the ensemble numbers is equally impressive, with Harry Apps and Will Richardson as student activists Marius Pontmercy and Enjolras distinguishing themselves in particular.

However, it is not all redemptive moral misery. Martin Ball and Sophie-Louise Dann, as the Thénardies, bring several welcome scenes of panto pandemonium, although it is a pity they throw so much of the humour away in their indistinct delivery of Herbert Kretzmer, Alain Boublil, and Jean-Marc Natel’s clever comic lyrics, which further the principled politics of the story.

Even so, Hugo’s spiritually benevolent message rings loudly, and with particular resonance at this time of year. Denying the awesome power of this immersive production would be humbug.