How the stage was set for armed revolution in Ireland

In a second, edited extract from his book Vivid Faces, historian Roy Foster considers the role of theatre in shaping the minds of the revolutionary generation 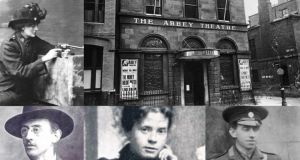 From the early 1900s the development of the Abbey Theatre was accompanied by challenging alternatives, spearheaded by political activists. They included breakaway groups such as the Theatre of Ireland and provincial initiatives such as the Ulster Literary Theatre and the Cork Dramatic Society. In Dublin the Irish Theatre Company, which occupied the Hardwicke Street Hall, appropriated the Abbey’s original idea of cosmopolitan theatre and mounted plays by radical young nationalist intellectuals such as Thomas MacDonagh, Joseph Plunkett and Eimar O’Duffy. And Gaelic League enthusiasts attempted to create a travelling company to produce plays in Irish for country audiences.

Through these activities, radical nationalists tried to find an audience. This met with mixed success, but they certainly found each other. The dramatic activities of Inghinidhe na hÉireann mobilised the energies of Maud Gonne, Alice Milligan, Ella Young and many other women through pageants and plays; Gonne later remembered Molly and Sara Allgood, Máire nic Shiubhlaigh, Mary Quinn, Marie Perolz and Helena Molony as having learned their craft at dramatic classes arranged by Inghinidhe in the York Street Workman’s Club. Many actors played an active part in later revolutionary activities, while those involved in writing and producing agit-prop drama in a number of formats and locales include MacDonagh, Plunkett and O’Duffy and other revolutionaries such as Terence MacSwiney, Constance Markievicz, Patrick Pearse, Bulmer Hobson and Helena Molony.

They attended the Abbey almost religiously, but for political illumination they looked elsewhere. Many involved in the early Abbey enterprise had been drawn into the world of political theatre through the dramatic presentations staged by Alice Milligan for various cultural organisations around the fin de siècle.

Her “living pictures” were projected through the Gaelic League, which appointed her as travelling lecturer in 1904. They were also adopted by organisations such as Gonne’s Inghinidhe na hÉireann and educational institutions with a penchant for nationalist propaganda.

The diminutive and indefatigable Milligan had already made her mark by editing the nationalist journal Shan Van Vocht, along with Anna Johnston. Themes from Irish history were recycled and presented with maximum pietistic uplift.

Milligan’s impact and influence was felt not in the little theatres of radical Dublin but in community theatre, Christian Brothers schools and local groups. Milligan’s conviction that plays should be constructed from “ancient, historical and legendary themes” was buttressed by the belief that in the “fortunate era” of olden times, “all garments, including those of royalty, were homemade”. So, in a sense, were the plays.

Back in the metropolis, if the Abbey had become the established church by 1905, what were the dissident congregations? They made up a network of little companies, sometimes overlapping each other.

The Theatre of Ireland was staffed by refugees from the Abbey as well as by Constance and Casimir Markievicz, Helena Molony and other radical Sinn Féiners; Padraic Colum was their best playwright.

They overlapped with Casimir Markievicz’s Independent Theatre Company from 1908 to 1912. Both enterprises were contemptuously attacked by WB Yeats in Samhain. Like his wife, Markievicz was a natural bohemian in the process of rejecting an upper-class, landed background, though at first they both frequented Dublin Castle circles as well as those of the artistic avant-garde. But by 1907 the Markieviczes were involved with seceders from the Abbey such as Máire nic Shiubhlaigh, a radical nationalist and the poet-playwright Séumas O’Kelly. From 1908, in keeping with his wife’s increasingly radical stance, Markievicz’s plays veered into nationalist politics – notably The Memory of the Dead.

The cast included Constance Markievicz and future revolutionaries such as the young Fenian doctor Patrick McCartan, and Seán Connolly, who would later join the Abbey and die on the roof of City Hall during the 1916 Rising.

Delia Cahill, reviewing the play from a nationalist and feminist perspective, declared her relief at seeing “a man shouldering a pike, to go out to fight the English, and to see a woman send him. We want more plays of that style in Ireland of today – rousing, Nationalist plays. Art, not for art’s sake, but for Ireland’s.”

Small dramatic companies continued to form and split like amoebae in the years up to the first World War. Sinn Féin’s reference to “the dramatic life that is surging all around” Dublin was well-founded. Patrick Pearse’s brother Willie started up yet another company, the Leinster Stage Society, in 1910, but the plays mounted there tended to concern – as The Irish Times mordantly put it – “our old friends the fairies, who seem to have fallen on evil days since the introduction of railway trains”.

The briefly active Cumann na nGaedheal Theatre Company emerged from Arthur Griffith’s line-up of political societies that morphed into Sinn Féin; it soon merged with the National Players Society, which was recruited from the Keating branch of the Gaelic League, an organisation notoriously infiltrated by the IRB.

Their repertoire tended to revolve around Irish translations and lumpen historical pageant-dramas by Alice Milligan. Dedicated playgoer Joseph Holloway confided to his diary in September 1906, “they seem to become worse and worse each time I see them”. But the company certainly acted as a forum for political ideas and discussion. So did the Theatre of Ireland, which reconstituted itself as Na Cluicheoirí or Cluithcheoirí na hÉireann (Ireland’s Players) in order to appear at the annual Oireachteas of the Gaelic League.

The trouble was that the political plays mounted by the radicals were manifestly unsuccessful with audiences. Thomas MacDonagh’s When the Dawn Is Come is a good example. MacDonagh taught with Patrick Pearse at the experimental and radically nationalist school St Enda’s, which he helped to found, but he had his sights set on becoming a playwright.

The title of his first produced play suggests a nationalist allegory in the mode of Cathleen ni Houlihan – or, indeed, Maud Gonne’s Dawn. But When The Dawn is Come is an allegory about compromise, betrayal and foreign rule, set in the near future. The Abbey rather unwillingly co-operated in the production. At the climax of the play a redeemed deliverer dies, having taken arms against the invader, liberating his nation. The critical reaction was uncertain. Unsurprisingly, one of the very few positive reviews appeared in the journal published by Patrick Pearse’s school.

In 1912 MacDonagh emerged with yet another combination of players, the Irish Theatre Company, bankrolled by the irrepressible Edward Martyn, who worked uneasily with MacDonagh, his brother John, and the excitable, theatrical young poet Joseph Plunkett, whose wealthy mother owned Hardwicke Street Hall, where they produced their experimental plays.

This ramshackle theatre in a run-down street north of the Liffey was a kind of playground for the Plunkett children. Joseph, Geraldine, George, Jack and Mimi Plunkett, freed from their erratic education and at odds with their dictatorial mother and ineffectual father, used the family’s far-flung property empire to further their own subversive enterprises.

One instance was the farm-building complex at Larkfield in the Dublin suburbs, which they ran as a mixture of commune, training-camp and bomb factory, and another was the theatre. For Hardwicke Street, Countess Plunkett provided velvet curtains, a rebuilt stage, various props and much of the production costs, though “her idea of a really good play was Townley’s 18th-century farce High Life Below Stairs”. Her children were more inspired by the Moscow Arts Theatre: Uncle Vanya and The Cherry Orchard were part of the repertoire as well as Pillars of Society and An Enemy of the People. And MacDonagh’s last play, Pagans, was more accomplished, and exemplified the kind of modern European drama the Irish Theatre Company wanted to project through the new premises: an Ibsenite treatment of unfulfilled marriage played against a starkly modernist backdrop.

Significantly, the play then veers into nationalist politics, with the hero unexpectedly joining a revolt against British rule. In the context of the time, this gesture reads like an acte gratuit; four years later it would look very different.

Vivid Faces is published on Oct 2 by Allen Lane