Edinburgh festivals: awards and acclaim – and exhaustion – for Irish performers

As the international and fringe festivals close, Irish teams reflect on a good month 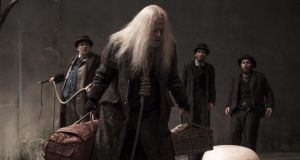 Irish productions have won awards and excellent reviews at the month-long Edinburgh International Festival and Edinburgh Festival Fringe, which have just ended.

Druid Theatre won a Herald Angel for Garry Hynes’s well-reviewed revival of Samuel Beckett’s Waiting for Godot, which ran at the Lyceum during the international festival. Hynes, the company’s artistic director, said: “It was an incredible festival, and it’s fantastic to have the cast and company recognised with this award. It’s an honour to be ranked among this year’s outstanding artists.”

Waiting for Godot was one of eight Irish shows in Edinburgh this month supported by Culture Ireland as part of its GB18 promotional umbrella. Another GB18-supported show, Inis Theatre’s Class, by David Horan and Iseult Golden, won a Scotsman Fringe First. The play, which ran at the Traverse Theatre in association with the Abbey Theatre, won four-star reviews from the Scotsman, Herald and Guardian, which listed it as one of the best fringe shows. Class, about a parent-teacher meeting that goes very wrong, was also nominated for a Carol Tambor Award.

Golden said on her way back from Edinburgh that it went “wonderfully well, selling out almost from the beginning”. She and Horan said the fringe is “the biggest festival in the world and highly competitive, so to stand out there really means that the show is connecting with people and has something original to offer. Audiences were laughing and crying and discussing it avidly afterwards, just as they did in Ireland, and the reviews have been both very complimentary and also articulate about the politics and the characters in the play.”

The were “incredibly chuffed” to win the Fringe First, “and also delighted for the cast that their work is being recognised so warmly”.

Among other GB18 shows, Malaprop’s Everything Not Saved and Prime Cut and Pan Narrans’s My Left Nut also featured in the Guardian’s assessment of the best fringe shows.

The Irish actors Cathy Belton, Derbhle Crotty and Aisling O’Sullivan gave “breathtaking performances” in Landmark Productions’ staging of The Approach, by Mark O’Rowe, the Observer said. The play, which ran at the Assembly Hall, also got five stars from the Edinburgh Reporter and the Edinburgh Festivals Magazine.

Maz & Bricks, Eva O’Connor’s play presented by Fishamble, was described as one of the best plays in Edinburgh this year by the British Theatre Guide.

In Irish dance productions, Ballet Ireland’s Giselle and Liz Roche Company’s Wrongheaded each got four stars from the Stage.

Having work seen by bookers and producers is a big incentive to bring a show to Edinburgh. Iseult Golden said the festival led to a lot of international interest and invitations for Class, and she and Horan “hope to be be taking the show on the road to some pretty exciting places”. Two other GB18 shows are also being considered for New York venues, and there is interest from Australia for Irish productions.

Minister for Culture Joseph Madigan congratulated all the Irish artists and creative teams in Edinburgh. She said: “With more than 3,500 shows at the Edinburgh festivals, it is testament to the high quality of work being created in Ireland that Irish artists received awards and such critical acclaim.

“I am immensely proud of all the achievements in Edinburgh and the work that Culture Ireland does in supporting these productions. Our artists continually present work on the international stage of the highest standard which provides global audiences with a sense of Ireland and the powerful creativity of our people.”

Golden said that “that taking a show to Edinburgh is quite a daunting prospect financially, and really hard to do without support. We had the good fortune to go in association with the Abbey Theatre and with the invaluable backing of Culture Ireland. So we’re happy that we did them proud over there and that their support paid off.”