A Skull in Connemara review: Rich drama of perverse satisfaction 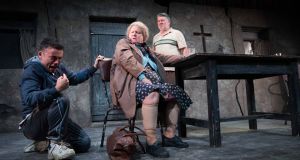 In Martin McDonagh’s fictional Leenane, people “smile at you ‘til you’re a mile away before they start talking behind your back”. Mick Dowd (Pat Shortt) has been suffering 7½ years of the community’s aspersions, as they try to decide whether or not he murdered his wife. As Mick prepares to exhume her remains to make room in the local graveyard, his neighbours are determined to establish the truth, and, if they can’t, to invent it.

The middle play in McDonagh’s much-lauded trilogy, A Skull in Connemara is often overshadowed by the tragedy of The Beauty Queen of Leenane and the farce of The Lonesome West. However, in some ways it is McDonagh’s richest drama; the ambiguity of its closing moments offer a perverse satisfaction to fans of his deliberate dramaturgy.

Andrew Flynn’s polished production for Decadent Theatre draws every edge of darkness to McDonagh’s Gothic scenario. The cracked stone walls of Owen MacCarthaigh’s set offers the ghost of a crucifix as a visual centrepiece, but there is no moral compass in McDonagh’s cruel and claustrophobic world. Teenager Martin Hanlon (Jarlath Tivnan) bottles a girl for teasing his trainers. His granny Maryjohnny (Maria McDermottroe) swindles starving orphans by cheating at bingo, while the face of law and order, Martin’s brother Tom (Patrick Ryan), is too busy chasing fictions to see the facts right under his nose.

Shortt offers celebrity credentials to this production, and his pensive performance only adds to the suspense: does this restrained soul look like the kind of man who would murder his wife for burning scrambled eggs? However, it is Tivnan who steals the show with his explosive energy as Martin, swinging between baffled simplicity and psychopathy as he drives the plot on. Scene Three, in which he and Mick smash the skulls of the recently exhumed, is performed with an irreverent joy that you will, surely, never see anywhere else again. That is McDonagh’s genius after all. He may wear his theatrical inspirations proudly – the shadow of Beckett and Synge lurk in every dusty corner of Mick’s cottage – but he creates something entirely unrivalled from the assemblage.