Camilla Cleese on her dad, John: ‘He’s not my favourite Python!’ 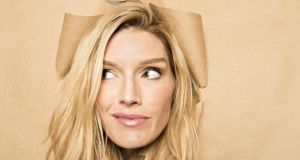 With just a hint of a smile, Camilla Cleese admits that the name of her Edinburgh fringe show is “the ultimate, shameless nepotism”. It’s called Produced by John Cleese, even though it isn’t produced by him at all. But she is. “I don’t think he would put money into something as unlucrative as this,” the daughter of the comedy legend says, “unless it was a marriage.”

Cleese barely mentioned the connection in her first Edinburgh show, back in 2014, except for some jokes at the expense of her father’s many – and often expensive – marriages. But this time around, more confident and more experienced, she’s embracing her heritage. “I want to talk a little bit about being his daughter, but, because I’m not doing a full hour, I don’t really have the time to delve into all the different aspects. So it will be a combination of that and some of my stand-up. For people who are familiar with him and his work, it’s clear where my influences come from. I can blame anything offensive on him.”

If I was misbehaving in public, the way he’d get me to behave was to act like a gorilla – literally get on all fours. I’d get so embarrassed I’d immediately shut up

Cleese, who is sharing the bill with the US comic Steve Hofstetter, had considered performing under a different name but thought it would be pretentious. And she thought about not performing at all – it took her a while to make her way into comedy. People, she acknowledges, “will still be, like, ‘She’s just here because she’s John Cleese’s daughter.’ I’m aware there’s times when I’m going to get booked because of that, but it doesn’t happen very often in the States. Certainly, in Britain, it’s great for publicity, but then I’m still going to get judged a little bit more.”

Most people wouldn’t instantly link them. John’s second daughter, from his second marriage, is very much the tall, blond, California glamazon, having moved to the US as a child with her mother, the American actor Barbara Trentham. “I don’t look like him,” she says. “Thank f***ing God. He’s a good-looking guy, but the underbite, the moustache, would not be a good look. But I got his height.”

She spent much of her childhood in London; her mother initially stayed in Britain after splitting up with John. “I still feel quite British on the inside,” Cleese says. “I definitely apologise too much. I think my sense of humour is certainly more British, particularly with my dad’s influence. I feel very at home here, but then I realise everyone perceives me as an outsider. I used to have a British accent, and I think it really irritated my dad when I started sounding American, so I ran with it.”

Cleese, who is now 34, thought as a child that everyone’s parents were on television. One of her earliest memories is of being escorted off the set of A Fish Called Wanda, because she was unhappy about a scene where her father is dangled out of a window. She remembers being pushed out of the way by Monty Python fans hoping for autographs at premieres, being awed by magic tricks over lunch by the likes of Steve Martin, and sitting at the top of the stairs when Sean Connery came over for dinner because she liked listening to his voice. “I always loved Michael Palin, ” she says. “He’s still my favourite Python. Don’t tell my dad.”

John sounds gratifyingly silly as a father. “If I was misbehaving in public, the way he’d get me to behave was to act like a gorilla – literally get on all fours. I’d get so embarrassed I’d immediately shut up. He doesn’t have an embarrassment gene. He just doesn’t give a f***. He never did – and now it’s really bad.”

Cleese discovered that she too enjoyed making people laugh, and was good at it, via the not-unfamiliar route of trying to get people to like her. It was difficult moving to the United States, going from a strict London prep school to a liberal one in Chicago where there was no uniform and you called the teachers by their first names. She and her mother moved a few more times, and she found herself trying to make friends, trying not to be bullied and trying not to be alone a lot.

“I think that contributes to comedy and creativity. I became the class clown, got in a lot of trouble. At first I was getting bullied really bad and was really miserable, but the one nice thing about moving was you could reinvent yourself. I kind of figured out how to make people like me, and that was mostly through humour.”

In her teens and early 20s Cleese was in and out of rehab for drug and alcohol addiction, and for a period was homeless. She and her father were estranged for a while. She doesn’t want to go over it again, except to say: “I was being a f***-up and went down a dark path.” How did they repair their relationship? “I think it was more just his approach of, ‘You don’t have the privilege of being in our family until you straighten up your act.’ But there was always a lot of love there. I don’t think it was out of spite or anything. It was what he felt would be most helpful for me – and it worked.” She didn’t hold it against him? “It’s always hard, because I was in a pretty bad place, but we made amends after. We’re closer than ever.”

She had a good joke in a previous show about a new child in the family: her father’s fourth wife, Jennifer Wade, a jewellery designer more than 30 years his junior. She has also joked about his third wife, from whom he had an acrimonious €13.5 million divorce. Does he mind? “I don’t think he has a leg to stand on, so he doesn’t really get a choice,” Cleese says with a smile. “As long as I don’t make fun of Jen it’s fine. Nothing I ever say about her is vicious, because I like her. It’s just playful teasing. That’s how we show affection in our family. It’s a general sharpening of our teeth on each other.”

Cleese worked with her father on his 2005 show, Seven Ways to Skin an Ocelot. “I think we both thought that would mean make coffee and type,” she says. “I wound up contributing more than either of us anticipated.” She wrote herself into the one-man show and ended up touring with her dad. They collaborated again, adapting A Fish Called Wanda into a yet-to-be produced musical. “We work really well together,” she says. “We think quite similarly, and I learned most of what I know from him, some of it inadvertently. We tend to agree on things, but I will stand up to him, even though I know he has worlds more experience.”

The MC was, like, ‘I guess that was mildly entertaining for a woman, but who cares? By a round of applause, how many people would f*** that girl?’

She did her first stand-up show in late 2012. At one of her early gigs, an open-mic night at a big Los Angeles comedy club, the MC came on after her. “He was, like, ‘I guess that was mildly entertaining for a woman, but who cares? By a round of applause, how many people would f*** that girl?’ I was fuming on the inside, but I didn’t know what to do. Now I would jump back on stage and whack the guy. You have to stand up for yourself, and you have to have a thick skin to keep going.”

Have all the allegations and revelations of the #MeToo movement had any impact on comedy? “First of all,” she says, “you get pretty desensitised, because it is still a boys’ world. I try to channel that into wanting it that much more and to prove them wrong. But it’s that kind of environment. I don’t sense it in the UK as much, but in the US if you spoke out about it you’d just get blacklisted.”

A recent survey by the British comedy website Chortle found that 26 per cent of women comics had been molested by a male comic. Although Cleese hasn’t experienced anything like that, she talks of “a very accepted level of misogyny and sexual harassment. In the US, if you’re asked to go on the road with a male headliner, there is sometimes an assumption that something is going to happen.”

Over the past few years, though, her own experience of comedy has been improving. “I don’t know if it’s just because things are changing,” she says, “or because I’ve earned the respect of more people.” Still a relative newcomer, Cleese has started making a name for herself in her own right, away from the easily identifiable Englishman who sometimes sneaks in to the back of LA comedy clubs.

Does she still feel the pressure to live up to her father’s reputation? “I’m sure much of it’s in my head,” she says. “But I put a lot of pressure on myself. I want my dad to be proud of me.” – Guardian

Camilla Cleese and Steve Hofstetter: Produced by John Cleese is at Assembly George Square Studios, Edinburgh, as part of the Edinburgh Festival Fringe, until August 26th