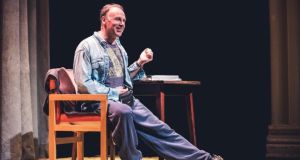 Two hundred years since the publication of Mary Shelley’s precocious masterpiece, Frankenstein, comes a new version from Michael West for Theatre Lovett – not a strict adaptation but rather a “mutation”. That’s fitting, because the story has always been ready to change. Shelley herself suggested it had come to her as a terrifying dream, giving the book its own unsteady conceit. The creature’s story of injustice and torment is thus wrapped within its creator’s story of hubris and regret, itself reported to a sailor, who writes about it to his sister. And still none of them ever anticipated the bolted green neck of Boris Karloff.

West’s version is a more carefully composed creature, and director Muireann Ahern and her design team splice together new and old ideas rather than dredge up graves. Lovett plays a contemporary scientist, tooling around with genetic experiments, who creates life from his own DNA and stem cells. Perhaps in answer to the literary bore who reminds you that Frankenstein is the scientist, not the monster, this one-man show makes it deliberately hard to tell the difference. However you tell the tale, from which perspective, with however many vowels, the story lives on.

Viking Theatre, Clontarf, 13th August-September 18th, vikingtheatredublin.comDeveloped from a short play first presented four years ago, and reworked as a performance piece for the actor Don Wycherley, My Real Life is a quirky and dark piece about one man’s decision to die. Written by Artemis Fowl author Eoin Colfer and directed by Ben Barnes, it sees Wycherley playing a middle-aged Wexford man named Noel, recently diagnosed with Multiple Sclerosis, now dictating the contents of his own scabrous eulogy for a friend, together with his reminiscences and regrets, into a C-90 cassette tape.

It’s equal parts earthy authenticity and absurd fantasy – Wycherley’s character professes himself “of sound mind and unsound body” – but it errs on the side of wistful comedy, where Noel’s fondness for The Thompson Twins and Howard Jones makes nostalgic use of 1980s pop and his strong sentiment for the lost Rose contains a love still to be declared.