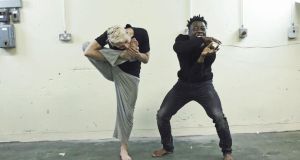 In spite of the three bodies lying onstage, there is still a lingering feeling of hope at the end of John Scott’s Inventions. Yes, dancers Ashley Chen and Oona Doherty have just danced a duet that grew more unstable by the second, their balance barely held by faltering steps as if the ground beneath them – and all certainty in their lives – is crumbling to dust. They are left prostrate on the ground, their fall complete. The third body, Kévin Coquelard, has had an even more dramatic descent. He flails about the stage constantly tripping over himself with the sickening screech of skin and thud of bones against the hard floor, until he collapses, exhausted and defeated on the floor.

And yet, there is still hope, mostly channelled through Valda Setterfield, the 83 year-old dancer exuding a calming presence throughout the performance.

She is the first to appear onstage, emerging from the audience gently swaying to the distant sound of Antônio Carlos Jobim’s song Águas de Março (Waters of March). His free associative lyrics of everyday objects swept away by torrential spring rain sets the scene for what follows. Inventions is driven by the same sense of falling, of moment-to-moment normality swept away in a self-consuming emotional vortex.

In these opening moments Setterfield is joined, Pied Piper-like, by the other four dancers (including Mufutau Yusuf), and their shared dance is to be savoured. Soon the communal splinters into the individual and each dancer’s movement becomes a representation of inner angst rather than shared pleasure. (“This movement is my personal geometry,” insists Oona Doherty early in the proceedings.) Successive duets relentlessly represent this sense of uncertainly, frequently featuring shuddering, jittery expressions of iron-filled souls. This dancing from the entire cast is always laser-focused and impressively committed.

Single row seating means that the audience can’t avoid a visceral response to this movement, yet Eric Wurtz’s lighting installation and Tom Lane’s sound design – based on Bach’s Two-Part Inventions – both drive and leaven the action. Ultimately, the simple images of Setterfield dancing alone, and being taught a dance that Chen learned from a two-year-old child, provides a counterweight to the self-destruction.

Michael Kiwanuka: ‘If you’re a creative, you don’t try and be that, you just are’
7

The Crown’s Charles and Diana years: A world of privilege, glamour and tension
9

Malachy McCourt: ‘Frank wouldn’t be happy unless he was miserable’
10