How to make a newspaper in an hour

Fringe review: Enter the offices of The Dublin Correspondænt and bring your controversial opinions 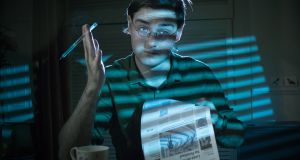 “People said I was mad to start up a newspaper in 2017,” says my editor-in-chief Conor O’Toole. He’s a sanguine, encouraging guy to work for at The Dublin Correspondænt, a publication so relaxed it operates out of a flat and has a typo in its masthead.

In every other respect, time is against us: there’s just an hour to put together tomorrow’s edition, from the front page news story and front page theatre review (now there’s an idea), to the front page opinion piece, crossword and personal ads. Basically, it’s only a front page.

The content is briskly sourced from us, the news team, cannibalising recent personal events: in our case, a robbery by a one-night-stand, which goes out under the headline, “Crime of Passion!” Other pieces are instant commissions: “Does anyone have any controversial opinions?” Through it all, the office burbles with good music, anecdotes, valuable short cuts for editing and living, some breezy gags and a busy camaraderie.

Sure, it’s a parody of process, but O’Toole nails the fun stuff: the crackling energy of an absorbing team game, the miracles forged under pressure (“You, draw a satirical cartoon”) and the countless sly cheats we call professionalism.

It’s intimate and entertaining, wonderfully Fringe, and, for the old media spirit that inspires it, much closer to a lifeline.
Runs until Sept 24