Dancing on a razor blade: The brilliance of Miss Saigon

The Vietnam War isn’t obvious musical material, but Schönberg and Boublil’s classic show, which is on its way to Ireland, pulls it off 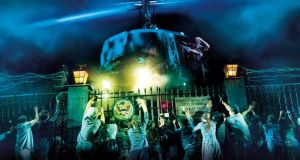 Miss Saigon: the musical dramatises the fall of what is now Ho Chi Minh City during the Vietnam War

In the centre of Ho Chi Minh City you can still see the flat roof where the last American helicopters lifted off, evacuating American personnel after the fall of Saigon, as the Vietnamese city used to be called. That event, on April 30th, 1975, is also known as the liberation of Saigon, depending on your perspective.

“Which rooftop? We just picked one,” Gerald Berry, a colonel in the United States Marine Corps, told CNN. He was the pilot of Lady Ace 09, the very last helicopter out.

Operation Frequent Wind also lifted many thousands of South Vietnamese, fleeing as the North Vietnamese communist troops readied to take over their city. Photographs show chaos, with throngs of desperate people scaling walls, being held back by armed soldiers, clutching at barbed wire. They’re impossible to look at without a potent mixture of anger and grief welling up.

If Schönberg and Boublil could handle prostitution, violent oppression and slaughter at the Paris barricades they could handle anything

It hardly seems the stuff of musicals. On the other hand, the duo behind Miss Saigon, Claude-Michel Schönberg and Alain Boublil, who had just come fresh from the success of Les Misérables, possibly reckoned that if they could handle prostitution, violent oppression and slaughter at the Paris barricades they could handle anything. And if opera can deal with troubled subjects, why not musicals?

Miss Saigon is based on Madama Butterfly, the opera by Puccini, which tells the story of Cio-Cio-san and a US navy lieutenant, BF Pinkerton, in 1904 Japan. But where Pinkerton is cynical and manipulative, marrying the 15-year-old Butterfly with every intention of leaving her once he finds an American wife, Miss Saigon’s Chris is a romantic male lead who falls in love and only wants to do good but ends up hurting everyone around him.

Schönberg and Boublil were inspired to update the story of Madama Butterfly to what was then near-contemporary Vietnam, when they chanced on a photograph taken at a Saigon airbase in 1975. Showing a mother sending her 11-year-old daughter to the United States, presumably in the hope of a better life for the child with her father, it’s a heartbreaking image.

“Her silent scream is the most potent condemnation of the horror of that war – of all wars,” the pair write on the occasion of the launch of the 2017 tour, which brings the show to the Bord Gáis Energy Theatre, in Dublin, in October. “This photo could have been taken today in Syria, Sudan and probably in Ukraine . . .”

It’s a theme taken up by Red Concepción, who plays the Engineer, the slippery and avaricious fixer who co-opts the naive Kim into his brothel, where she will meet Chris, and the stage will be set for the show’s central tragedy to unfold. “I basically run a seedy, unsavoury bar in Vietnam,” Concepción says.

The Filipino actor was cast during a series of auditions in Manila; the production features actors from 15 countries in all. It’s a far cry from the early controversies that haunted the show when Jonathan Pryce played the Engineer, wearing prosthetics and “yellowface” make-up to give him “Asian” eyes. Its producer, Cameron Mackintosh, threatened to cancel the Broadway run when the Actors’ Equity Association refused Pryce permission to play the role in the United States. Equity eventually reversed its decision, and the show went ahead with Pryce as the star. Since then the Eurasian role – French-Vietnamese in this case – has gone to an actor of Asian origin.

“Having people from all over the world on a show is very good right now,” saysConcepción, an energetic actor with an engaging smile and an animated air that, on stage, can go from puffed-up pride to animal fear in an instant. “Theatre brings people together. Miss Saigon, in all its epicness, manages to show very real emotions, and touches people’s hearts. For all its spectacle, it’s about a mother who loves her child and wants to do what’s best.”

“It’s so relevant,” says Ashley Gilmour, the English-born actor who plays Chris. “The story is based on war, relationships being torn apart, families being torn apart, mass exodus. We see it in Syria. I think that will never change, and that’s a really sad thing. We’ve never learnt to accept each other’s differences.”

In the tricky position of playing a romantic lead who can’t live up to his early heroic image, Gilmour, who is as handsome and clean cut as you’d expect for the role, describes how, in preparation for their performances, the cast watched documentaries and films about the Vietnam War. These included Hearts and Minds, the 1974 documentary by Peter Davis, which Gilmour describes as quite horrific.

His character, he says, is clearly suffering from post-traumatic stress disorder after leaving Vietnam. Does he get emotional when he plays him, I ask. “Oh, yes,” he replies, and I can see the feeling in his face and hear it in his change of tone. “We tell a real-life story every night. People go to the theatre to escape from real life, but I think it’s really important that people go on this journey. Can theatre change the world? I’d like to think so, but then I look at the world, and I think maybe it can’t.”

Whatever about world changing, Miss Saigon has been incredibly successful, touring since 1989, and it pulls off the difficult feat of having a highly serious core while existing in the world of entertainment. “I remember saying, this subject matter is like dancing on a razor blade: a brilliant feat if you can pull it off,” Mackintosh told the New York Times recently.

It does this through some brilliant, and frequently upsetting, undercutting. In one of the big opening numbers, The Heat Is On, the women of the Engineer’s club, Dreamland, dance for the American GIs. It’s energetic and sexy but also lewd and tawdry. You can see in the faces of the women characters that they’re doing a job, forced by circumstance, and that the gloss of the dreams being sold by the Engineer are paper-thin layers over a debased set of exchanges.

Similarly, in the second act, the Engineer’s big number The American Dream is tempered by our knowledge that it’s a hollow promise, that the dream is tarnished. The United States he imagines doesn’t exist, and the parts that do would finish him off, if he ever did get there – and this is the US to which Kim, like thousands of other Vietnamese mothers, dreamed of sending their children.

“What surprises me is how people love this guy,” Concepción says. “Maybe it’s a vicarious thing, to see someone getting away with these things. If everyone was like that in real life we’d be . . .” He pauses as we consider Donald Trump and the state the world is in.

Miss Saigon has been criticised for appropriating Vietnamese history. It’s a hard criticism to sustain

Beyond Pryce’s yellowface, Miss Saigon has been criticised for appropriating Vietnamese history for “white” authority. It’s a hard criticism to sustain: the show does include stereotypes and sexism, but it’s set in a time when these were rife, and it manages to show how damaging they are to both victim and oppressor. It “is a bizarre confluence of opposites; like sunbathing on a bright sunny beach which is freezing cold,” Tim Teeman wrote of the New York revival, in the Daily Beast.

But, although he meant this as a criticism, is that not the same experience as living comfortably in a world in which refugees desperately try to land on the sunny beaches where we like to spend our holidays? The musical elements here are the Trojan horse that disarm you as you absorb these truths, and leave you reeling.

As I watch the show later that night I’m reminded of what Gilmour said about whether theatre can change the world. Sooha Kim is extraordinary as Kim, bringing to unforgettable clarity the idea that while war is announced by figureheads and governments, individuals suffer worlds of pain. The songs stay in your head, the staging is extraordinary, the sets are fantastic. A helicopter lands on stage. The evacuation scenes are shattering. Bring tissues and an open mind.