Dublin Fringe Festival: our guide to the best of the weekend

Here is our selection of the best shows opening this weekend, and the best productions still running that we've seen so far 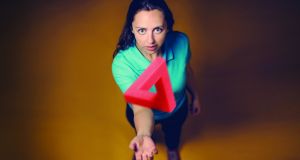 End of at the Dublin Fringe Festival

If, like me, your immediate response to the apocalypse would be to regret not having read more books, Sugar Coat Theatre’s new production is just the slap in the face you’ve been needing. Seanan McDonell’s new comedy, which will be performed in The Gutter Bookshop, is easily one of the loveliest venues of this year’s Fringe. Two friends working in a bookshop receive a mysterious package that may herald the end of the world as we know it. Sharp-eyed director Conor Hanratty works with Charlene Craig, Damian Gildea and Will Irvine – as well as conjuring tricks – to flip through the beginning of the world’s last chapters.

Gladys and the Gutter Stars

Whatever happened to Gladys and the Gutter Stars? The musical duo, whom the press still write about in sensationalist, incredible and hyperbolic terms, are still universally regarded as the greatest creators of popular song since the dawn of measurable time. Word is their long-anticipated new album will be made available exclusively on floppy disk. Or that it will be composed exclusively of whale song. Either way, performers Rachel Gleeson and Cameron Macauley finally offer a sneak peek of the opus in this Fringe show. Could this be a stunning return to form or a shocking display of hubris? Gladys and the Gutter Stars are pretty sure it will be one of those things.

A woman travels north in the winter to visit her ill mother, and her new husband. The performance – created by Nadine Flynn and Aaron Stapleton – combines theatre, film and visual art to evoke a cabin folding in on itself with licks of the supernatural and nudges of real concern. In a place where the daylight won’t easily reach, manipulation teems and high suicide rates chill the marrow. Rose, struggling to keep her sanity, must find the light to get free.

In Michael Patrick’s bittersweet comic solo performance, a young Belfast boy is having trouble with his manhood. In 1998, during the tentative steps of the Good Friday Agreement, the five-year-old’s father passes away, leaving an absence he comes to rue keenly in adolescence, when his left testicle inflates to the size of a grapefruit. In whom can a self-conscious teenager confide?

Written with his director Oisín Kearney, Patrick’s autobiographical coming-of-age tale strives for independence and intimacy through comedy, protected by a very sturdy solo-show formula, made more vulnerable with confessions of body horror and bereavement.

Patrick’s gang of mates, as charmingly sympathetic and well-informed as he is, take the bulge in his trousers to be a sign of his prowess. For his part, Patrick interprets it as punishment from God, “tangled up with wanking”. Unable to confide in his stoic mother he relies on excruciating discoveries via a dial-up internet connection.

The peace process would be a tempting metaphor to explore shifting authority and unguarded dialogue, but Patrick, you feel, is closer to a peace product: his preferred metaphor is a Sega video game.

Embarrassment, moreover, has been his trouble, now transformed to the source of his comedy. Like an ultimately unfussy procedure, that’s an encouraging reconciliation. - Peter Crawley
Runs until Sept 23

Can a band live on without their front-woman? In Cameron Macaulay and Rachel Gleeson’s wry comedy with songs, both are musicians debuting new material for a podcast. Their painful split from demented lead singer Gladys, of course, is unresolved.

Here, bitterness is barely suppressed under the polite exchanges of an interview. Gleeson sours into a scowl as Cameron gives an intelligible but winding answer for why he struggles with Arts Council applications. In turn, she talks seriously about spirituality and Kanye West.

Shane Daniel Byrne’s charming interviewer deals out thoughtful questions about imagery and lyrics, but his guests haven’t reflected much on a track-list that sounds like a string of second thoughts (Why Am I with You?, Pull Up the Blind, Betrayal).

The surreal arrival of Gladys herself rouses deeper anxieties. This could easily have been a vapid defence for naval-gazers but instead we get something more discreet, the trudge of a generation asked to work for free. With sparks of rock’n’roll, the Gutter Stars carry on. - Chris McCormack
Runs until Sept 17

Everything Not Saved
Project Arts Centre
★★★★
Theatre has been curious about memory for as long as it can remember. But lately there’s been a surge in reflections on the fog of human recall versus mercilessly exact documentation. (Why not take a picture? It will last longer.) For their fourth production, the playfully cerebral company Malaprop stage a fascinating, maze-like meditation on reminiscence and record, which shifts and reforms like the folds of a mind.

Devised by the company and Dylan Coburn Gray, it begins with a sly challenge, a ribbing audience memory test, and leads through discrete sequences in dreamlike judders. At the filming for an in memorium sequence in preparation for queen Elizabeth II’s death, a breezy conversation between friends splinters into trails of ethics, perception and the breadcrumbs of recollection. Director Claire O’Reilly treats the show similarly, as an artful blend of the concrete and diaphanous, where details are meant to dematerialise.

But the image of a “forensic actor” drawing from his own trauma to perform in police interviews is hard to dislodge. Hidden within Peter Corboy’s vivid performance, you feel, is a tonne of research, worn admirably lightly. In a later riff on Rasputin, dimly remembered, the fading of cultural memory – of just knowing stuff – becomes mortifyingly funny. A final surfeit of text, however arch, strains for a conclusion, but memory is selective: years from now, when everything else is lost, you’ll still remember Maeve O’Mahony’s virtuosic death spasms and smile. - Peter Crawley
Runs until Sept 16

It’s getting harder and harder for me
Boys School, Smock Alley
★★★★
“We are all in trauma. It’s obvious,” say the three performers in unison before coming down to a barren stage. Each in turn burst into lyrical monologues about the crises and boredoms of their lives on Belfast’s Ormeau Road, which have left them each feeling lonely, isolated and on edge.

Their trauma is individual, and collective, and the show gives you a real, well-rounded feeling for these womens’ experiences, from a wild, self-indulgent millennial, to an uptight pharmacist, to an older housewife. It tackles dependency, addiction, and how cities affect their inhabitants, often leaving them unheard.

Belfast is central to the show – from the rhythms of their speech, to their language, to that dark, Belfast humour – but many of the issues could be applied to any city.

Each of the women might be feeling the weight of the world, but the show isn’t sentimental: it’s playful, sharp, and dry-witted. Painstaking and thoughtful, it’ll make you laugh and punch you in the gut all at once. - Aoife Valentine
Runs until Sept 17