Plays to be presented in different parts of building are A Piece of Monologue, Play and Footfalls 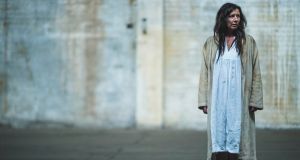 An actor with the Blue Raincoat theatre company, which is staging three Beckett plays in disused former factory in Sligo. Photograph: Peter Martin

The setting will be unusual when three short plays by Samuel Beckett are staged in Sligo for 10 nights.

Beckett Hazelwood, presented by the Blue Raincoat theatre company, takes place from Thursday in the former Saehan factory, a long-abandoned warehouse space, in the grounds of Hazelwood House on the shores of Lough Gill.

The three plays which will be presented in different parts of the factory are A Piece of Monologue, Play and Footfalls.

Niall Henry, artistic director with the Sligo-based company said that each night an audience of 80 will be taken on a “physical and theatrical journey” .

“The location opens up such amazing possibilities for these great plays,” he said. “The performance area is an old derelict factory. It is the biggest industrial building of its type in the north west, covering an area of nine acres”.

Henry said the audience will start their theatrical journey when they arrive in the car park dominated by Hazelwood House on one side, and the forest immortalised by WB Yeats on the other, before being guided through the cavernous dimly-lit building.

Hazelwood House, which was built in the early 1700s, was designed by Richard Cassells who also designed Leinster House and Powercourt House.

In 2015, it was bought by David and Sue Raethorne who intend to establish a whiskey distillery and exhibition space in the former factory, while long term plans include the restoration of the house.