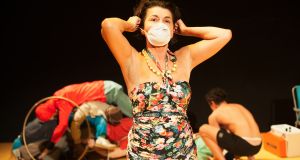 Empathy is like a tanning bed: This Beach, at the Project Arts Centre

HOT BROWN HONEY ★★★★
Spiegeltent @ Merrion Square
An exhilarating Australian burlesque troupe formed by women of Polynesian and indigenous origin, Hot Brown Honey are more about stripping away prejudices and preconceptions than teasingly disrobing, though there’s some of that too.

Fusing elements of hip-hop, cabaret and dance, the cast emerge from their “hive” to stage dazzling setpieces while raising questions of identity, gender and cultural imperialism.

Crystal Stacey peforms a hilariously athletic take on obnoxious Bondi Beach babes before a harrowing but hypnotic gymnastic piece on domestic violence, while Lisa Fa’alafi subverts the Tiki bar stereotype of Polynesian women in vivacious fashion. And when Kim Bowers aka MC Busty Beatz prowls the aisles with oversized fake breasts, men have never been earbashed by feminists in such exuberant manner.

OVERRIDE ★★★★
Project Arts Centre, Space Upstairs
Everything in Violet and Mark’s apartment is lovely, but how much of it is real? Not much if the small roof garden, with its AstroTurf and fake begonias, is anything to go by. It is a stark, clinical, and enviably ordered world (brilliantly brought to life by Sarah Jane Shiels), where music is summoned with the snatch of a tune, and you can scan your body before breakfast. So far, so almost-like contemporary reality.

Stacey Gregg’s unsettling new play extends the idea of simulation beyond the couple’s material life, in a stimulating drama about the culture of cybernetics. Do androids dream of lasagna? Perhaps they do. They are also capable of lying and of love. Amid all the technological fuss, director Sophie Motley ensures the human drama is never overwhelmed by the virtual realm. A clever, prescient vision of a disturbingly possible future.
- Ends September 17th
Sara Keating

On a private beach, an alarmingly bronzed family incinerate the bodies that periodically wash ashore. Empathy is like a tanning bed, Carl Harrison’s pal advises, “you’ll look good in front of your friends but eventually it will kill you”.

When, during a wedding, one body draws breath (Neimhin Robinson), they keep him around long enough to amplify their hypocrisies, and, by extension, our own. Each caricature arrives pre-skewered: Daniel Reardon’s posturing paterfamilias, sifting through history in his sandpit; Bryan Quinn’s ultra-defensive military man, Pom Boyd’s hand-wringing ethical consumer, but none more lacerated than Breffni Houlihan’s gawping artist/documentarian.

For Brokentalkers, that seems like a bitterly defeatist self-portrait, yet the piece is finally something angrier: a satire of shrugging consciences, aware of eroding calamities but content to coast.
- Ends September 17th
Peter Crawley

GLOWWORM ★★★
Project Arts Centre, Cube
Zellie de Bourful is having “an attack of the overwhelms”. A budding entomologist, she has just captured that most elusive of insects, the lampyrus noctiluca, of the order of Coleoptera: commonly known to you and I as the glowworm. Zellie has her own taxonomic rituals – capture, contain, kill – but the glowworm represents more than another specimen: its bioluminescence is a metaphor for the glowing of her soul.

Glowworm is an artistically ambitious and thoroughly charming coming-of-age tale from Umbrella Theatre, which uses traditional storytelling techniques, puppetry and object theatre to tell its unusual tale. One of the best scenes features a conversation between a teapot, a silver sugar bowl and a pair of China cups.

The Victoriana set is fantastically realised by art director Hanna Bowe and the live soundtrack by Dylan Tonge Jones contributes significantly to the weird and wonderful atmosphere. Tom Nieboer’s script, however, is not quite equal to the impresive aesthetic, with an overly complicated and suggestive story arc that make it a bit less family-friendly than the advertising suggests.
- Ends September 16
Sara Keating


- The Fringe runs until September 25th. See fringefest.com
- Reviews continue daily through the festival at irishtimes.com/culture/stage