All Mod Cons review: A swirl of issues crowd out the heart of an overworked play

Erica Muray’s second play is well acted and pacily directed, but it tries to do too much 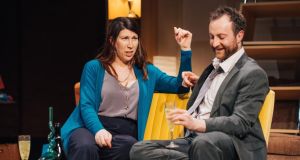 Lyric Theatre, Belfast
★★★☆☆
The award-winning Co Limerick-born writer Erica Murray has had an auspicious start to her career. She recently received a Channel 4 Playwrights’ Scheme bursary and last year was selected for the New Playwrights Programme at the Lyric Theatre in Belfast, where she is currently artist-in-residence. Her second play, All Mod Cons, was developed at the Lyric,so it is unsurprising that its premiere should be staged in the theatre’s studio space. What is surprising, however, is that the finished piece attempts to cram in too much content and so feels disappointingly overworked.

A maelstrom of significant issues – sibling relationships, family strife, childhood influences, gender identity, sexual violence, international cultural divides, social mores – compete fleetingly with one another. They swirl around the reunion of a brother and sister who have lived in different countries for almost a decade. Immature, volatile Gary (Michael Shea) is a home bird, dominated by his mother and still, in the aftermath of her death, trying desperately to please her. Jean has returned to Belfast from Berlin for the funeral – or, maybe, for good. Thoughtfully played by Mariah Louca, Jean used to be John, a situation that is only cursorily examined, in spite of being flagged as one of the play’s main themes.

The four-strong cast respond willingly to the pacy direction of Ronan Phelan, who makes effective use of Katie Richardson’s funky  soundtrack to switch between scenes

After a brief conversation the two unwisely decide to buy a house together. Enter Gary’s old friend Ian, a struggling estate agent, similarly under his mother’s thumb for an unpleasant reason that will surface late on. In his professional capacity Ian is showing prim, pernickety Laura (Sophie Robinson) around the same properties, although the dramatic potential of their crossing paths never quite materialises.

Chris McCurry crafts an unsettling presence as the emotionally unstable Ian, bringing queasy humour and suppressed, sweaty energy to a temptingly meaty role. His storyline alone would make the basis for a satisfying play, as would several of the others, which the writer courageously sets out to examine in a single swipe.