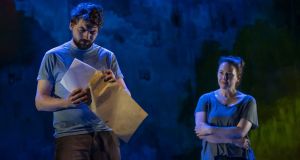 It’s a rare artist who can find something instructive in fracking, the controversial technique of releasing natural gas from underground rock. But what begins as a political protest and a matter of survival for the west of Ireland fishing community depicted in Darach Mac Con Iomaire’s play for An Taibhdhearc and the Abbey steadily becomes a more potent metaphor. Facing hardship, treachery, sabotage and fathomless guilt, the bedrock of one family is bored until it splinters, and long-hidden secrets come bubbling to the surface.

Premiered last year at the Galway International Arts Festival, Baoite (Bait) casts its net wider still. As a rift opens between a daughter and her father, on either side of a protest against a fracking vessel called “Prosperity”, tensions deepen between the daughter, Cáit, and her husband too, as they try, and fail, to conceive via costly IVF treatment. If the future seems threatening, the past may be dragging them down too. Given a sparing beauty in music and design, the play asks searching questions about conscience and concealment. If it falls slightly short of its own ambitions, it still finds admirable ways to tap its own resources.

It may be a hugely significant day in the life of a gentle farmer, but he isn’t one to make a song and dance about it. That’s partly because Pontias – named “after the pilot fella” – is one of Pat Kinevane’s more unassuming characters, one who wears the tragedy of his orphaned youth and long separation from an adult daughter with self-deprecating wit. It’s also because he hates musicals, something he tells us in song.

The sustained fillip of Kinevane’s latest collaboration with director Jim Culleton for Fishamble retains their spartan methods while playfully invoking the sweeping grandeur of big-budget entertainment. Set in Clerys, on its surprise last day in operation, it follows a nervy Pontias seeking a gift before his reunion with his daughter, while disembodied voices offer warm encouragement, and composer Denis Clohessy pastiches the classics. What has shaped him more, then, the Bible or the musical? Some of the play’s ideas of life everlasting, the before and after, are fuzzily intermingled. But when Pontias sings sweetly of his musical idol, Gene Kelly, and dances his own showstopper, heaven can be found in the most unlikely places.

Can a work of fiction about the Holocaust be inaccurate?
5