Opera about JFK’s tragic sister Rosemary to premiere in July 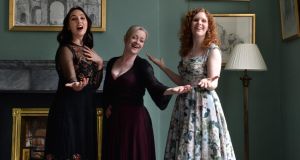 A new Irish opera about Rosemary Kennedy, sister of US president John F Kennedy is one of two world premieres to feature in Irish National Opera’s (INO) new season, announced on Monday.

Amid singers and musicians in the City Assembly House on Dublin’s South William Street, artistic director Fergus Sheil shared plans for INO’s next 12 months, as it prepares to open The Magic Flute at the Gaiety on Tuesday night.

The 2019-2020 season’s strikingly contrasting productions include two world premieres. One is Belfast composer Brian Irvine’s Least Like the Other, a new opera about the tragic life of JFK’s sister, Rosemary. It draws on disjointed transcripts of conversations, family letters, diary excerpts and television footage, and opens in a Galway International Arts Festival co-production in July.

The other premiere, Evangelia Rigaki’s This Hostel Life, is an installation opera from stories by Nigerian Melatu Uche Okorie about living in direction provision. It will open in the crypt at Dublin’s Christ Church Cathedral in September.

Echoing the INO’s mission to bring opera around Ireland, cultivate new work and platform Irish opera talent, Mr Sheil was “delighted to cast Irish singers in so many major roles”.

In November the “flawless mezzo-soprano Tara Erraught” sings the title role in Rossini’s Cinderella/La Cenerentola, which she will also sing on her return to the Metropolitan Opera in New York next spring, he said. In March, another mezzo-soprano, “the honey-toned Paula Murrihy”, sings the title role in Bizet’s Carmen at the Bord Gáis Theatre, in which we also have “the luxury of the beautiful, clear and true soprano voice of Celine Byrne as Micaëla”.

“In May, our Konstanze in Mozart’s The Abduction from the Seraglio is soprano Claudia Boyle, who is captivating in the truest sense of the word,” Mr Sheil said. “She’s joined by the stylish tenor Dean Power as Belmonte.” He added: “You don’t have to take my word for any of these descriptions: they all come from reviews by critics who were clearly impressed.”

At the musical launch, Irish singers sang to welcome other forthcoming INO shows, including Sinéad O’Kelly, singing from Griselda by Vivaldi. The October production will be the first Irish production of any of his stage works.

INO executive director Diego Fasciati said he “can’t wait for the first full production of a Vivaldi opera in Ireland”.

“We are also incredibly privileged to hear Tara Erraught in Cinderella just before she sings it at the Met in New York,” he added.