Comedy barely figured in Belfast until the 1990s. Then Kielty and Colin Murphy arrived 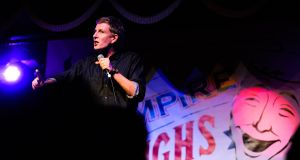 Patrick Kielty on stage in Belfast in 2012 to celebrate the Empire Laughs Back Comedy Club's 20th anniverary. Photograph: Elaine Hill/Kelly

Patrick Kielty’s first Belfast standup set won him a keg of beer. It was freshers’ week at Queen’s University in 1989, and his housemates had nominated him for a talent competition. As well as the booze he earned a termly gig on campus, but across Belfast comedy barely existed.

Until, that is, the BBC producer Jackie Hamilton approached him with an idea: the Empire Laughs Back, the city’s first dedicated comedy night. “There was no scene, so we decided to make it,” Kielty says.

The venue, the Belfast Empire, was in a “beautiful sweet spot” on a neutral street between loyalist and nationalist parts of town. “When we set the comedy club up it was 1992; the ceasefire wasn’t until 1994, so there was an edge to it,” Kielty says. “The very first night we weren’t sure how many people would turn up – 400 queued around the corner.”

Hamilton brought acts from London – big names such as Jeremy Hardy and Lee Evans – but Kielty became the weekly compere. With barely 15 minutes of material, he found inspiration in the new. “It led to my style being much more satirical and political,” he says.

In October 1992 the Shankill bombing and Greysteel massacre forced Belfast to shut down. But the Empire remained open. “The place was packed. The thirst to have somebody talk about what was going on was really great,” Kielty says.

The Empire set the tone for Belfast standup, unleashing a desire for comedy that gave Northern Ireland a voice, with Kielty at the heart. When Colin Murphy, who began standup in 1993, took over as MC at the Empire, he remembers the struggle to win over the crowd: “They didn’t come to see the acts; they came to see Paddy. The applause would stop before you got to the microphone when they realised you weren’t Paddy.”

Murphy was one of only a few Belfast standups at that time. “It wasn’t a culture that existed,” he says. “There was nowhere to do it.”

The Empire Laughs Back is still going strong and is supplemented by open mics, monthly gigs led by individual comedians, and regular shows at arts venues, including the Black Box, and bars such as the Sunflower and Pug Uglys.

A former music teacher, Livingstone started comedy seven years ago and began writing songs in character as a woman at the end of a long night out. She was one of the few Belfast acts moving away from traditional standup.

Livingstone has also seen a shift away from talking about sectarianism: “People are, like, ‘Right, that’s never going away, but what else is there?’ They’re able to talk more about themselves.”

But Belfast audiences are still politically astute. “It’s the only place where you could do a joke about a local councillor and most of the room would get it,” says the standup Sarah Firby.

“Audiences here still like local stuff,” says Murphy, who now mostly tours theatres and is a stalwart of the BBC panel show The Blame Game. “It doesn’t necessarily mean it has to be about politics, just something about us, because we don’t see it anywhere else. Until Derry Girls you didn’t hear our accents making jokes on TV.”

That desire to see yourself reflected led Firby to set up Coven Comedy Club in 2019, a monthly gig passing the mic to women and LGBTQ comedians. Although Belfast has produced standups such as Nuala McKeever and Mary Flanagan, its scene is still male-dominated. “A lot of women and queer people didn’t feel there was much for them,” Firby says. “If you’ve got more Conors on the bill than women, you’re not hearing a huge amount of variety.”

For a while, says Kielty, “if you didn’t have something to say about what was going on in Northern Ireland, people didn’t want to hear it. We focused life into this binary prism. The fact that that prism is disappearing means the full breadth of comedy can be developed.”

Audience response to Coven has been amazing, Firby says. She’s now planning workshops to encourage more women and LGBTQ people to try standup. “Whenever you’re talking about inclusivity, people go, ‘There aren’t any women comedians.’ I thought I’d try to bring other people up and create an environment where they feel confident.”

Across the growing variety of comedy, there are still common themes. “Slagging each other off is almost a way of communicating here,” says Livingstone. “It’s taken in good humour, but there’s a real sarcastic, ‘Aye, brilliant, well done.’”

Murphy says: “There is a viciousness here that to the outsider can be frightening and a familiarity with people we don’t know. We, within minutes, will become overly familiar to the level that we think we can roast someone.”

In the 1990s, that came from audiences, too. “The Belfast audience wanted to join in,” Murphy says. “The Empire used to be infamous – in England, people were terrified of coming here.”

There’s also been a willingness to embrace darkness. “Even Roy Walker, ” says Murphy. “In his material there were undertones of doom.”

When live comedy starts again, Kielty hopes we’ll hear more from Belfast comics. “I’d like to see more Belfast performers getting a crack at it across the UK,” he says. “There are comedic stories that the rest of the country needs to hear – bigger social issues that are currently Northern Irish stories. There is a youth and an energy in that city. The best days are still ahead.” – Guardian