Dublin Fringe Festival: Janet Moran’s show is based on the Aer Lingus hijacking of 1981 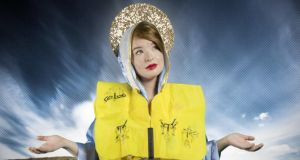 Abbey Theatre, Peacock stage
★★★
Among the passengers on a fateful Aer Lingus flight to London in 1981 was a man of convictions – unfortunately, in both senses of the word. A former monk, he hijacked the plane, demanding the pilot land in France and the pope reveal the third secret of Fatima.

Janet Moran’s lovingly made, giddily nostalgic comedy for Mermaid – a two-hander for Caitríona Ennis and Patrick Moy of multiple, multiple role-play – comes with some gentle reassurances. You could smoke on board, drinks were free and hijackings were still ripe for a laugh.

Like Moran’s work behind the beloved Fringe hit Swing, this play amasses in couples: two comically stern and morbid stewardesses, a meet-cute encounter between an Ulster emigrant and a would-be novice, two blunt and nervous newlyweds, a pair of snippy elderly sisters. Confined mostly to their seats, the performers move like the dialogue, in sharp, exaggerated pirouettes, against supple video displays and along firmly redemptive character arcs.

An enviable team of collaborators seizes every opportunity for embellishment, from earthy comic turns to absurd religious visitations to slick stage effects, but, at a comedy-deflating 90 minutes, not enough for sacrifice.