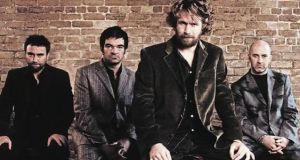 Hothouse Flowers will play as part of Tradfest 2021 on Saturday, January 29th on tradfest.ie.

The Approach
Thursday, January 21st, 7.30pm, projectartscentre.ie
Take three of the “finest performers of our generation”, put them into a virtual room, and watch the sparks fly out of your screen as Mark O’Rowe’s play reignites some age-old questions about relationships, betrayal and how to make sense of the world. Cathy Belton, Derbhle Crotty and Aisling O’Sullivan star as Cora, Denise and Anna, three women whose conversations belie deeper, darker emotions. Part puzzle, part tragedy, this three-hander will leave your livingroom crackling with kinetic energy long after they’ve exited stage left.

Comedy Karlnival Online
Friday, January 22nd, 8pm, roisindubh.net
Karl Spain heads a star-studded lineup of laugh merchants in this puntastic live-streamed comedy fest. More zoo than Zoom meeting, it’s a menagerie of mirth featuring Andrew Maxwell, Milton Jones and Sinead Quinlan. There’s two ways you can take part in the fun. Get a VIP Front Row ticket for a tenner and you can be part of the Zoom call, allowing you to heckle, give feedback and hang around with Karl before the gig in the virtual Green Room. Or you can get an “Observer” ticket for €8 and just watch, safe in the knowledge that you won’t be humiliated online (I’m used to that).

Irish Times Winter Nights Festival 2021
Monday, January 25th, to Friday, January 29th, €50 (€25 for Irish Times subscribers), irishtimes.com/winter-nights
Billed as “an online festival of conversation, culture and ideas”, the Winter Nights festival is the perfect way to pass a few days in lockdown in the company of such cultural and political luminaries as Ross O’Carroll-Kelly creator Paul Howard, Irish-Nigerian author Emma Dabiri, Scottish first minister Nicola Sturgeon, Irish MEP Mairead McGuinness, actor Gabriel Byrne, immunologist Luke O’Neill, CNN news anchor John King, comedian Dara Ó Briain and the Taois himself, Micheál Martin. An array of fine Irish Times writers – including Patrick Freyne, Fintan O’Toole, Roisin Ingle, Rosita Boland, Kathy Sheridan, Hugh Linehan, Sorcha Pollak and Jennifer O’Connell – will be there to bring out the best (or worst) in their guests, tease out the topics of the day and Zoom into the zeitgeist. Okay, I know we’re banging our own trumpet and blowing our own drum here, but I suggest you take a leaf from the title of Patrick Freyne and Paul Howard’s talk and just say, okay, let’s do their stupid idea.

Music Feeds at-home charity festival
Thursday, January 28th, and Friday, January 29th, £15, musicfeeds.org
Food poverty is becoming a huge problem in the so-called developed world, and is being exacerbated by the pandemic. This two-day online festival has been organised by UK Co-Op and Everybody Belongs Here to help fight food insecurity – and also help struggling musicians and crew during the prolonged shutdown of live entertainment.

This is anything but a meagre offering. A line-up more than 40 music acts will perform including Sam Smith, Fontaines DC, Blossoms, Newton Faulkner, Flogging Molly, Gruff Rhys, Joseph Arthur, Charlotte Church (where’s she been?) and Adam Duritz from Counting Crows. They’re not all going to be crowded together on a shared stage, though: each live performance has been especially recorded, and there’ll also be a few archive concert clips, masterclasses and Q&As, all weaving together nicely online over two nights. Your 15 quid ticket gets you access to the festival on both nights, and the great thing is you don’t have to worry about rain, or the queues at the beer tent.

Tradfest@Home
Thursday, January 28th, to Sunday, January 31st, 8pm, tradfest.ie
For trad music fans, the Covid-19 restrictions have been particularly cruel, denying us the simple pleasure of gathering round in the snug for a good aul seisiún. The organisers of Tradfest 2021 have had to reimagine the festival in the light of the ongoing restrictions, and they’ve decided to spread the events out online between December 2020 and June 2021, just so they don’t overcrowd the schedules. The festival’s first live events of 2021 take place over four nights in the elegant environs of Dublin Castle, staring with Andy Irvine and Donal Lunny (Thursday, 28th) and continuing with Dervish (Friday, 29th) and Hothouse Flowers (Saturday, 29th) and wrapping up with Altan on Sunday 31st. Each headliner will be joined by an array of excellent guests; look out for Maighréad and Tríona Ní Dhomhnaill, Eleanor Shanley and Mike Hanrahan, Laoise Kelly, Karan Casey and Kate Ellis, The Mulcahy Family, Tolu Makay, Cathy Jordan, Eleanor McEvoy and Damon Butcher and Zoe Conway and John McIntyre. And here’s the real craic: each gig costs the princely sum of €4.99.

The Cinematic Orchestra at the Royal Festival Hall
Friday, January 29th, 8pm, southbankcentre.co.uk
On a Friday night, we like nothing better than to put on our hipster gear, trim our goatee and head out to catch a live jazz-electro-improv group. And we can still do that this Friday by simply logging on for this debut streamed event from the acclaimed British musical collective. An “awe-inspiring” streamed performance is promised, straight from London’s iconic Royal Festival Hall, accompanied by a stunning visual treat in the form of a film by Leander Ward entitle Crimson Wing – Mystery of the Flamingos. The band will also play tracks from their new album, To Believe, and draw from their 20-year-long back catalogue to come up with some buried gems.

Happy Days
Saturday, January 30th, olympia.ie, ticketco.events
Let’s face it, only Beckett can properly convey that existential claustrophobia sparked by Covid-19 lockdowns. Siobhán McSweeney, best known as the sarcastic and perma-exasperated Sr Michael in Derry Girls, digs deep for her role as Winnie, buried up to her waist in the burning sun, but doing her best to see the bright side of life, in this online event from Landmark Productions. Marty Rea joins McSweeney as Winnie’s seldom-seen husband Willie. Caitriona McLaughlin directs this one-night-only live stream from the Olympia theatre, inviting us to experience it together while staying apart.

So bury yourself in your favourite blankets, pour yourself a drop of whatever you’re having yourself, and watch McSweeney bring one of Beckett’s most iconic characters back to life,

Blackpink: The Show
Sunday, January 31st, 5am, youtube.com
“Blinks” around the world were devastated by the news that the Korean K-Pop sensations had to postpone their online gig scheduled for December 27th due to Covid-19 restrictions. It was like waking up on Christmas morning and discovering that Santa hadn’t shown up. But the good news is that the extravaganza will go ahead, bringing you the full arena concert sensation – with the audience safely at home and TikTok dancing along with all the hits.