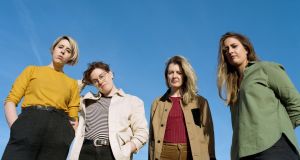 “You hear stories about how it’s the music supervisor who books you, or somebody in the studio who is Irish, and they’ve heard about you or whatever,” says Sarah Corcoran, who started the band with Pamela Connolly. But when the pair got on the Zoom call to Corden first, before they started recording the interview for last night’s programme, “He was, like, ‘You know, we do have a music supervisor here, and usually they book the act, but you’re my booking, because I absolutely love you guys.”

Once they were on air, Corden told his audience that he “could not be more excited to have them on the show” and praised the band’s debut album, In Waiting, as one of the best records of 2020.

I’ve just been sitting and reading the reaction online, and it has been so lovely, especially in a year where there are no gigs

Talking to Corden from a Dublin studio, Corcoran said that releasing it during the pandemic meant it had been “a strange time” but that putting the album out on their own label meant they were kept quite busy during lockdown, as they also handled all of the mail orders themselves. “It was actually a really, really exciting time for us, and then the reviews and all the feedback online have been really, really lovely, so hopefully when we get back gigging again it’ll be worth the wait.”

Dunfanaghy, in Co Donegal, got a shout-out after Connolly told Corden about the band taking a dip in the freezing Atlantic in December to get their creative juices flowing before recording the album. “It worked, I think – the album sounds great,” she said.

She also told Corden that she’d lost her togs in the area and asked for them to be returned if anyone in Donegal came across them. Corden said they “might be worth quite a bit of money in a few years if things keep going the way they are for your band”.

Corcoran says the experience of appearing on the show – Pillow Queens also performed their song Liffey for the host – was “very surreal”. “I’ve just been sitting and reading the reaction online, and it has been so lovely, especially in a year where there are no gigs, didn’t get to play to a crowd. It’s really nice to get the feedback from the people online – it’s overwhelming.”