It’s about Termonfeckin time: An Irish tradition gets a makeover 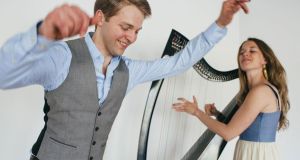 We’ve had a complex relationship with the harp, our national symbol, but over the past two decades it has enjoyed a steady growth in popularity to the point where now there are more than 2,000 harpers in the country, double what there were in 2001.

The 34th International Festival for Irish Harp kicks off on June 30th in Termonfeckin, Co Louth, with a raft of events that swing from Youth Folk Orchestra pop-up concerts to an evening featuring harper Maeve Gilchrist with percussive dancer Nic Gareiss and the RTÉ Con Tempo Quartet to, wait for it, Oíche na bhfear or men’s concert: a come all ye aimed at the small but growing community of male harpers dotted across the country.

It’s the perfect platform to go deep, exploring sounds that could have been made hundreds of years ago, as well as sounds that are just starting to get pulled out of the harp

Scottish harper and composer Maeve Gilchrist is festival harper-in-residence and she’s the epitome of a new generation of adventurous harpers, pushing the boundaries of her chosen instrument so that it feels both ancient and utterly contemporary.

“The main aim of the harp festival is to illuminate the harp not just as a deeply rooted traditional instrument but as a valid voice in 21st century music,” Gilchrist enthuses on the phone from New York, the place she’s called home for the past 17 years.

“So it’s the perfect platform for me to go deep, exploring sounds that could have been made hundreds of years ago, as well as sounds that are just starting to get pulled out of the harp now. The harp has orchestral possibilities similar to that of the piano and I think it’s really exciting for young harpers to see it being utilised in all these different ways.”

Festival director Aibhlín McCrann is determined that the festival programme is cutting edge and brimful of the myriad influences that are shaping the harp in the 21st century.

“We strive to not only integrate the harp with Irish traditional music,” she explains, “but also to ensure that it keeps its eye firmly on its core harpers’ repertoire, which is unique to the Irish harp and not to be matched anywhere else in the world.”

McCrann’s nurturing of young harpers in harp ensembles might be seen to be at odds with the traditional perception of the harp as a solo instrument, but it’s a move that’s been hugely successful, given young musicians’ appetite for playing together.

“It’s a newly found phenomenon in Irish harping which seems to be here to stay,” McCrann notes, “despite it not belonging to the tradition as it was. But it’s where it is at the moment. It does raise the bar, and gives opportunities musically, socially and developmentally for young harp players and exposes them to new influences, and it keeps them exploring.”

“I started on flute and tin whistle, so taking up the harp, I had the tunes in my fingers,” he explains, nonchalantly. “I love O’Carolan’s and Thomas Connellan’s harp repertoires. They’re unbelievable. You can never get bored. And the tunes are all so different. The O’Carolan concerto was so inspired by Vivaldi and Baroque music, and some of his other pieces by O’Carolan resemble modern music.”

Gilchrist’s recent collaborations with Appalachian percussive dancer Nic Gareiss are a perfect example of how the harp is boldly breaking free of its former identity as a genteel instrument rooted in the past.

“When I’m playing with Nic, I feel as if my notes are gathering themselves, taking form and dancing back at me,” Gilchrist says. “Collaborating with Nic brings rhythm and syncopation to the foreground. When I’m playing solo I may well be playing similar grooves or motifs, but perhaps it wouldn’t be experienced in the same way by the audience as this very rhythmic playing. Nic’s a fantastic musician and the way he approaches the music is as a percussionist. We really have to step in each other’s shoes. So he’s playing his feet and I’m dancing with my instrument. It’s a total joy.”

Gilchrist’s collaboration with the RTÉ Con Tempo Quartet is inspired by Beckett’s novel, Watt. The rhythms of Beckett’s language were a root inspiration for her in this commission from the Edinburgh Harp Festival.

“I was reading Watt and I was listening to a recording of a great monologue by the actor, Jack McGowran,” Maeve recounts, “where he’s talking about his father’s father, and his mother’s mother and his father’s mother, and so on. It’s this really intensely rhythmic musical spiel about ancestry and I love the rhythm of it and his affectionate but irreverent synopsis of the year.

“At the same time as I was reading it,” she recalls, “I was in the studio, playing with a lot of textures and thinking about the tiny sounds of the world: the unfurling of a leaf or the sound of a little blade of grass cracking through the earth. Then I wanted to utilise the harp and its strings as its own kind of living organism, and for me, this played to the idea of the cyclical turning of the year. It’s a 3 movement piece, and within it we incorporate samples of Jack McGowran reading parts of the monologue, and I also read parts of it myself.

For Maeve Gilchrist, the harp offers her endless possibilities, which she’s only started to mine in recent years.

“The more I go down that path, the more I zoom out, because I’m interested in seeing music through a wider lens,” she offers. “That’s been a real gift, because it stops me from getting stuck in the mathematics of my fingers. It makes me step away from the hand positions that I’m so comfortable with, and think much more about colour and texture, sound and conversation. I feel now that I‘ve gone there, I couldn’t possibly go back. It feels like the instrument is giving me all these new outlets for my artistic voice. And I’m so glad that the harp is my instrument because it’s got such a unique colour palette.”

One World: Together at Home – the Irishman who got Lady Gaga to say yes
8

My Dark Vanessa: A sharp debut that will cause a stir
10