RTÉ has remade The Field. It is called Gardening Together with Diarmuid Gavin 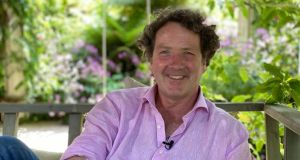 Gardening Together with Diarmuid Gavin: The host shows us some gardening tricks that involve, as far as I can tell, imprisoning hydrangeas using coat hangers. Photograph: RTÉ

RTÉ One’s serialised remake of John B Keane’s The Field began last Friday under the title Gardening Together. It features Diarmuid “the Bull” Gavin, a landowner who is, quite literally, out standing in his field.

He hasn’t had a visit from a land-hungry American yet, but it’s surely coming a few episodes hence, and he’s already digging a big ominous hole in the ground just to be on the safe side. He’s quite chipper about it.

“I invite you to my home so we can go gardening together,” he says at the outset, paraphrasing the words of Jesus/The Selfish Giant while wearing an open-necked pink shirt and a beaming tousle-haired head (the model’s own).

'Are they horses or cows?' Diarmuid asks of some piebald mammals in the field next door

Then he shows us a picture of his house and gardens as it was before he procured it from the Widow. In it we see the kind of manicured lawn and plain-looking house that would have made John Charles McQuaid weep with perversely chaste joy.

Then the camera pans over his exotic Bray-adjacent homestead as it is now, filled with trees and shrubberies and exotic plants and terraces and a thousand lost footballs and, probably, a few tribes of lost children who’ve gone in to retrieve them.

Normally for gardening shows, producers opt for classical music or pastoral folk. Diarmuid goes for sinful jazz, like he’s in some sort of plant nightclub for floronic hussies, which I guess is pretty accurate. He shows us some gardening tricks that involve, as far as I can tell, imprisoning hydrangeas using coat hangers.

Then he FaceTimes a lady called Mary to discuss her “problem garden” because his shtick is basically running a finishing school for wayward shrubs. Mary pans her iPad across the landscape and Diarmuid takes it all in. “Are they horses or cows?” he asks of some piebald mammals in the field next door.

I know that to many Dublin readers  this sounds like a pretty reasonable question. Friesian cows, magpies, penguins, pandas, killer whales, they largely look like the same species to you because you’re also the kind of person who shelves your books by colour.

In Diarmuid’s case, however, he says this to outline his identity as a plant supremacist. “Animals? Pshaw! Animals mean nothing to me. I’m all about plants. Give me an animal and I’ll bury it in topsoil and feed it sunlight until it photosynthesises.”

Diarmuid devises a masterplan for Mary’s land and leaves her to it. Then we go and meet 80-year-old Helen Dillon, a delightful expert in “floral boundaries”, who explains how gardening makes her forget her aching back and feet. We meet a community in Belfast who have turned a formerly dirty alleyway behind their terraced houses into a planty paradise. And later a woman video-calls in with a query about why her vegetable plot hasn’t been doing too well.

Diarmuid knows why. It’s because of man’s ancient enemy, the eucalyptus tree, which stands at the edge of her plot drinking all of the water and laughing haughtily at our petty human sorrows. Diarmuid tells the woman to change her name and move (I’m simplifying his advice a bit).

Generally, Diarmuid is a calmingly safe pair of green thumbs. He’s very casual. Whenever we pan back to him in his garden he’s sitting the wrong way on a big yellow garden chair or he’s swinging on a swing, Fine Gael-style, or he’s got a dog (or, as you call it, an “unidentified mammal”) hanging sheepishly under his arm. In future shows, he’ll no doubt do these links while standing on his head or hang-gliding from his veranda or any of the other things he does to occupy himself in his locked-down isolation (no one’s told him things have opened up). He shows us a big pit he’s been digging in his garden.

Yes, I seeded this in paragraph one. It’s apparently part of a plan to create a sunken gathering area for barbecues and isn’t simply a place to dispose of passing drifters. He digs as his workshy dog looks on. It looks like a very wholesome activity but it also looks like hard work. If I was a presenter at RTÉ, I’d suggest a show with a title like Gardening for Lazy People or Life with Servants or maybe just Nap Time.

Meanwhile, Mary has marshalled her entire family as labourers to create a garden paradise of Diarmuid’s devising. After the work is done, he decides to turn up to surprise her. I imagine he regularly just appears in people’s gardens, looming from the undergrowth like the Green Knight or Swamp Thing, an emergent property of suburban horticulture covered in twigs and soil and invoices from garden centres.

And so he observes Mary’s rose arbour and the “riot of colour” and takes time to wander around saying plant names like: “Tachelospermum Jasminoides”, “Eryngium Big Blue” and “Tropeolum Majus” (also, coincidentally, the names of my nephews).

Then he retreats once more behind the walls of his own garden idyll to complete his digging project, which now features a tasteful fire bowl and some stone walls embedded with his best friends, plants.

It’s a place to gather, he says, and as the camera drone flies away, we hear human laughter, suggesting, if you can believe it, that Diarmuid Gavin has human companions and not just hydrangeas and weeping trespassers who have fallen into his ornamental death pit. Anyway, I love this stuff.

I also binge-watched the Plot Against America this week (available on Now TV but airing every Tuesday on Sky Atlantic). It’s David Simon and Ed Burns’s six-part adaptation of the Philip Roth novel in which a real-life America First racist, Charles Lindbergh, wins the 1940 presidential election with his celebrity and then diverts the US away from joining the second World War and into anti-Semitic darkness. It’s told from the perspective of an ordinary Jewish family.

Just like Simon’s previous programmes, and unlike most US dramas, while characters variously strive or scheme or act kindly or selfishly, they’re powerless in the face of greater historical forces. As the episodes pass, you feel more and more scared for them and also increasingly nervous for contemporary democracy.

With the fascist dog-whistling coming from the lips of mainstream political figures in the US and the UK, The Plot Against America feels more chillingly relevant now than when Roth published it in 2004. It’s enough to make me stockpile food and dig a Gavinesque trench around my garden.