Radie Peat: On My Culture Radar

Lankum singer on the tear-jerking properties of Olivia Colman, and the podcasts of Jon Ronson. 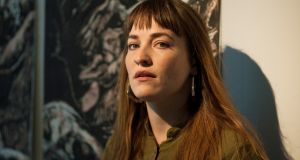 Radie Peat: I like the humour of people in Belfast – it’s a little meaner than in Dublin, in a good way

Restaurant
There’s an upscale Italian on Crow Street in Dublin called Rosa Madre. I used to live in Italy and I really miss the food, so anything that comes close to it in Dublin is good by me. They do great seafood and pasta in an authentic style – it’s delicious.

Comedian
I’m a big fan of Limmy, that Glaswegian lunatic. His comedy is twisted – he walks the line between funny and disturbing. I like Stewart Lee as well. He has me in fits of laughter . . . and I’d rather go out for a pint with him than Limmy.

Artist/designer
I’m currently into two Irish painters: Salvatore of Lucan and Shane Berkery. Their style is similar: they’re reviving the art of the masterful painting, but choosing unusual subject matter. More so with Salvatore of Lucan. He shows technical skill and creative vision. There’s a painting of him and his girlfriend both on their phones on their bed, with a ghoulish light. It reminds me of the classical depiction of the hag, with him as the hag. There’s another with him and his dad in McDonalds, which again has a classical feel alongside an everyday subject matter.

Album
I’m listening to Richard Dawson’s 2020. It’s an interesting piece of work. If you read the lyrics without the music, it reads like abstract poetry. I went to see Second Violinist by Donnacha Dennehy and Enda Walsh a while back and it reminds me of that: the music is set to mundane sentences, which makes a weird musical joke. The music itself is a range of genres. He’s been referred to as folk, but that’s not fully fitting – there’s elements of classical and prog rock too.

City
I love Dublin because it’s where I’m from, but I also like going to Belfast. There’s a nice buzz, people are sound, there’s a lot of good gigs and exhibitions, and nice places to go out. I like that everything is within reach, and I like the humour of people there – it’s a little meaner than in Dublin, in a good way. I spend most of my time there hanging out at my friend’s tattoo shop, Skullduggery Tatu.

Actor
I love Olivia Colman. She’s convincing in everything she’s done. I don’t cry much, but she’s one person who if I see cry on screen, I cry too. I think that’s the sign of a good actor.

Social media profile
I’m not great on social media, but I like David Shrigley on Instagram (@davidshrigley). He has these ridiculously simplistic paintings with text, and the drawings are so s**t, it’s part of the joke. They’re surrealist, but always really, really funny.

TV show
I’ve been watching the second season of Fargo. It’s not related to the film – there are a couple of oblique references, but otherwise it’s separate. I also like Flowers, which stars Olivia Colman and Julian Barratt from The Mighty Boosh. It’s a weird and amusing show, about a strange family.

Film
I really enjoyed JoJo Rabbit by Taika Waititi, about a boy in Hitler Youth whose imaginary friend is Hilter. I had an idea I would like it because the director made What We Do in the Shadows. It’s bizarre how funny JoJo is given that it’s a serious subject. I also went to the Lighthouse Cinema the other day to see Mandy with Nicolas Cage, and that was amazing. In tone, it’s almost two separate films turned into one.

Gig
I went to see Beak in Leeds at the Brudenell Social Club, and they’re coming to play in Dublin too. It’s just three people on stage; the drummer was in Portishead and the bassist played with Robert Plant, so they’re an interesting combination of musicians. They’re understated and tasteful, yet everything has an impact.