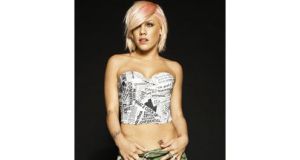 Conforming to a stereotype is not an option for Pink. Having ridden the bumpy waves from pop ingenue to hard-rocking, independent woman without mincing her words. Her latest offering declares open season on designer handbag-carrying, scantily-clad bimbos. Brian Boyd talks to an artist who refuses to dumb down

IT'S not often that you get a professional medical body issuing press statements supporting the lyrics of a song and the use of the visual imagery in the accompanying video. The International Association of Eating Disorder Professionals issued this statement on the release of Pink's latest single, Stupid Girls: "The song highlights the culture's relentless and unrealistic pursuit of thinness and unattainable drive for physical beauty.

"The IAEDP sees this as an opportunity to remind people about the seriousness of eating disorders, which have devastating effects as individuals struggle to achieve social acceptance and self-worth. Furthermore, the video highlights how life-consuming an eating disorder can be. I am hoping that women can see the unglamorous side of celebrity popularity founded on physical beauty alone. The IAEDP does not intend to endorse Pink's personal position but at the same time we applaud a recording artist who states that if women waste their time, money and energy on trying to be someone else's idea of 'fabulous', they waste their potential to be something better."

Pink's Stupid Girls was explicitly inspired by Ariel Levy's book Female Chauvinist Pigs: Women And The Rise Of Raunch Culture. Levy wonders why women today are embracing raunchy aspects of the culture that would have caused their feminist foremothers to vomit. Levy goes on to explore the intertwined concepts of modern feminism and sexual liberation - the implications of each and what it really means to be "empowered".

Stupid Girls speaks of the "paparazzi girls" with their "itsy-bitsy doggies and their teeny-weeny tees" and asks "What happened to the dream of a girl president?/She's dancing in a video next to 50 Cent." The video features nugatory glamour models and heiresses obsessing over designer handbags, fake tans and cosmetic surgery. One scene starkly references bulimia - it shows one of the starlets pushing a toothbrush down her throat. The thinly disguised half-starved, orange-skinned airheads are Paris Hilton, Jessica Simpson and Lindsay Lohan.

A must-be world record 8.6 million people downloaded the video from the internet before the single was officially released. Radio programmers went online to download the audio from the video in order to get it on the radio early. "I didn't hear from any of these girls directly, but I got some calls from certain publicists," says Pink, chilling out in her hotel room in Paris. "They wanted an advance copy of the song." Naturally you obliged them? "No fuckin' way," comes the smiling answer.

"I think the main thing here is that an awful lot of people are relieved that someone's actually talking about these things in public," she says. "What has surprised me most is that a lot of people agree with the point but hate that it's coming from me. I've been called a hypocrite. Then again, I've also been called fat. Some people have been offended by it, but that's cool, I like to push those buttons. I like dissent in the ranks. I think it was important that I got a letter from the eating disorders body congratulating me on what I said and what I showed. These diseases - and they are diseases - are very, very unhealthy. The video started off being humorous, but the point is there that you don't have to kill yourself to meet society's ideal for beauty."

Paris Hilton (bless her) was enraged by her portrayal in the video. She issued a statement which said that she was most unhappy with the fact that Pink (who hasn't had a record out since 2003) was using her to launch acomeback. "She said that?" splutters Pink. "Well, spell it Paris. Spell comeback."

It's not just that these young women starve themselves - and thereby cause serious damage to their menstrual cycle and normal metabolic rate - for the sake of the male gaze; it's also that there appears to be a conscious decision taken to turn on the stupidity in order to appear vulnerable/loveable. "These girls have dumbed themselves down to appear cute. How bad is that?" says Pink. "And the way it is now, I feel that it's just the one image of women out there which is being fed to society. There need to be more alternatives, options and examples about how you can be cool without the silly handbag and without acting like a bimbo. I can't get my head around this: it is lucrative to dumb yourself down. I cannot believe that the smarter version of the truth is not more interesting. I refuse to be stupid to get somewhere or get something."

There is a perplexing irony, however, about the release of Stupid Girls as the first single off the album. The label didn't want it and Pink had to enter into what she archly refers to as "discussions" with them about their decision. When you say "discussions" Pink, did any chairs go through windows? "Ha, ha ha, not quite," she says. "But they wanted me to work on a single with Max Martin [ the Swedish one-man pop music factory who writes for Britney Spears among others]."

You don't seem like a typical Max Martin poppet. "I think you have to be open-minded about these things. I don't sell my records out of a car boot. The labels now go on about what researches well and all that stuff. I certainly wasn't going to do a Britney-style song, but Max Martin is an ex-punk rocker. He produced the song U and Ur Hand on the album and the label loved it and wanted it as the single. That's when the 'discussions' started. To cut a long story, we ended up shooting a video for U and Ur Hand and one for Stupid Girls and they had to pick one. Guess who won?" asks the woman (real name Alecia Beth Moore) who picked up the nickname Pink from friends who thought she behaved just like the Mr Pink character in Quentin Tarantino's Reservoir Dogs.

The reason for her label's concern was that Pink's last album, 2003's Try This, sold 700,000 copies. However, the previous album, 2001's Missundaztood (which had the singles Get the Party Started and Just Like A Pill), had sold over five million copies. She had written Try This with one of her musical heroes, Tim Armstrong from the punk band Rancid. "I was kind of rebelling against the label on that one," she says. "I was going: 'You want a record? Fine, I'll write 10 songs in a week for your fuckin' record and you can press it up and put it out.' That was an awful time. I was walking out of half my interviews crying. I just felt they were putting a quarter in the slot to watch the monkey dance."

Of all the female pop/rockers who emerged together six years ago (Avril Lavigne et al), Pink has had the most varied (and enduring) career. She was originally put across as a brash r'n'b starlet who was aimed at the dancefloor, but she sabotaged that by working with Linda Perry (Pink was a major fan of Four Non Blondes) on more spiky guitar rock music. She then went Californian punk with Tim Armstrong.

Why she feels the need to collaborate so much is a mystery. As a songwriter herself, she has written for Gwen Stefani and Christina Aguilera. Never quite pop and never quite rock, she says the only artist who she ever really wanted to be like is Janis Joplin. Two years ago Pink signed up to star as Joplin in a biopic to be called The Gospel According To Janis. The film has yet to go into production and all concerned seem to have been rattled by the news that Renee Zellweger is set to star in a rival biopic to be called Piece Of My Heart. "All I can say at this point is that if Janis wants the film to be made, it will be made," she says cryptically.

A few years ago Pink was supposed to be the musical guest of honour at the 21st birthday party of Britain's Prince William. Pink was having none of it. She wrote a "thanks but no thanks letter" which read: "I was happy to learn that I was your first choice to play at your 21stbirthday bash, then disgusted to learn that you hunt and kill animals for fun. I hope you learn to change your ways. I did. I used to wear fur until I became a supporter of Peta (People for the Ethical Treatment of Animals). Call me or Peta if you'd like any suggestions as to how you should treat animals. Then maybe I'll come and play at your next birthday."

Although married for the last two years to the motocross rider Carey Hart, Pink is bisexual. "The problem was my brother used to steal all my girlfriends," she says. "I love women. I love curvy women. We are the sexiest things. When you see a nice, curvy women you think, well, why not?"

The album I'm Not Dead is released this week on the Arista label. Pink plays The Point, Dublin on November 14th

Duffy says she was ‘raped, drugged and held captive’
10