Pragmatism: A philosophy that’s as sensible as it is unpopular

Unthinkable: People don’t like to compromise because it means admitting one’s fallibility 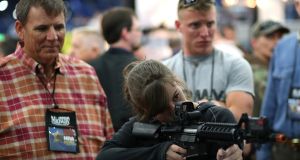 ‘What is the effect of resisting all gun control?’ the pragmatist would ask. Photograph: Justin Sullivan/Getty Images

How to deal with disagreement is an urgent challenge of our times. Without ground rules for adjudicating on competing claims, decisions get made by force and prejudices flourish.

Pragmatism is an attempt to overcome this problem. As a philosophical approach, it means more than a willingness to compromise. It calls for a distinctive way of understanding truth that begins with examining what practical difference ideas or beliefs make.

Little over a century ago, William James popularised the philosophy by stating baldly that what’s true is what “works”. His contemporary Charles Sanders Peirce – the “father of pragmatism” – disliked that formulation but agreed one should start with the “effects” of truth statements: “We must not begin by thinking of pure ideas – vagabond thoughts that tramp the public roads without any human habitation – but must begin with men and their conversation.”

So when it comes to a seemingly intractable problem like gun violence in the United States, for example, the pragmatist starts not by examining the nature of principles such as freedom and the common good. Rather, she or he will ask: What does defending the Second Amendment mean in practical terms? And what is the effect of resisting all gun control?

We crave moral certainty but we reap moral oppression

US political theorist Charlene Haddock Seigfried is a well-travelled pragmatist, having been involved in feminist and civil rights campaigning since the late 1960s. In Dublin this week to speak at a UCD conference on John Dewey, another key populariser of pragmatism, Prof Seigfried agrees that many people find the philosophy convincing but then fall down on implementing it. Why? Because, she suggests, they too much enjoy holding on their own prejudices.

Are people hard-wired to be prejudiced?

Charlene Haddock Seigfried: “Every living thing has a unique perspective from which to view the world. It isn’t static but develops over time in interaction with other people and things. According to William James, such tendencies are biases when they negatively impact the self or others. They are neutral or positive when they are useful or move society in better directions.

“Given these irreducibly multiple perspectives and values, it is necessary to listen to others and join together with those different from ourselves to first discover, then reciprocally criticise, and work in myriad ways towards mutual betterment. We must do this if we are to have any hope of avoiding hostility and oppression.

“Isolation and exaggerated self-regard as well as manipulating and oppressing others are corrosive enough to dissolve the bonds of mutual regard that permit community and beneficial social interactions.”

How can prejudice be reduced or eliminated?

“This is the toughest question. I never thought I’d ever lose the optimism of my Vietnam-era years, of participating in real and substantial social transformation. It was exhilarating taking part in so many firsts: putting together the first women’s studies classes; opening up what was then called ‘Classical American Philosophy’ to dissident voices, questioning its origin story in the privileged lives of elite males; and challenging the myth of American ‘specialness’.

“But now historical change seems more transient and cyclical. I’ve long been suspicious of power and hierarchical privilege, but now they seem a permanent feature of human society, ever ready to reclaim their places at the top.

“The lives of the marginalised taught me that every reform can be turned inside out. Liberating changes can be appropriated to bring about the opposite of what was intended. Feminists can march for women’s equality or for fairness in sharing the burdens and rewards of life. But call them ‘man haters’ and this slander is enough to deter young women from identifying with the movement despite sharing its values.

“This became clear theoretically in reconstructing historical changes but now it is apparent everywhere and directly affects our everyday lives.

“Prejudice cannot be eliminated, but it can be recognised and opposed whenever and however it appears.”

Compromise is a dirty word in political circles. How does one make ‘principled compromises’?

“As I said, any promising reform can be ridiculed to lessen and eventually eliminate its challenge to the privileges a few possess at the expense of others. It’s a very effective tool made even more powerful by the deliberately distorting echo chamber that is social media.

“Compromise is seen as negative from the perspective of those who believe in and think that they possess absolute truth. If you are sure you are right then any compromise can only dilute what is good and true.

“This is another argument for recognising that no one is omniscient and that we are limited by our perspectives to only part of what is there to be known and to what can be imagined. We literally need others to increase our own understanding and to reduce our own limitations.

“Compromise is then a recognition that no one has the whole of truth or the only good. As Jane Addams said, working together with others as equals on the many perils we face today is slower and more clumsy than dictating from the top down what should be done, but also more likely to lead to better and more satisfying outcomes.

“Unfortunately, the desire for easy, simple, solutions, abetted by media advertising and special interests, is often irresistible in the frantic conditions of modern life. And yet, we should resist and complicate things if we are ever to reach workable and just solutions.

“What makes compromises principled is determined by their ends-in-view. Compromising in order to favor one corporation or business over others or for political gain without regard to its wider impacts is wrong.Compromising as the result of deliberation by those who will be affected or by their legitimate representatives is a recognition of the multiple points of view, interests, and values operative.

“When the end-in-view is justice or social well being, and the compromises made reflect the diversity of concerns and of the means to attain it, then the compromise is also just. As John Dewey said, the good is the social. This requires some understanding of what is involved in the sociality of human beings in a dynamic, ecologically interdependent system of relations.”

Many political philosophers seem to be drawn to pragmatism while at the same time treating it as a holding philosophy until something better comes along. Why are people resistant to embracing pragmatism as a philosophical approach?

“They are resistant to embracing pragmatism because it recognises that we are all fallible, that truth is never had, but only worked toward and reimagined, that ‘the good’ is many goods discovered and rejected over many centuries and at many times.

“Capital punishment, for example, provides a satisfying closure to a troubling situation. But it thereby covers over the fact that the determination of guilt may be wrong – wrong by collusion, by insufficient or tainted evidence, or by dint of biased juries. It denies that our knowledge changes over time, that the good of one era or regime is the evil of another, and it denies the operation of privilege and deprivation in our judgments.

“We don’t like to recognise that we are evolving, fallible beings, that we are, in Nietzsche’s words, ‘human, all too human’.”

Question: Who am I?

Colin Farrell: ‘LA is superficial, but you get that in Dublin too’
7

Bruce Springsteen at 70: 13 surprising facts about ‘The Boss’
10