People giving out about Karens need to stop being such Karens 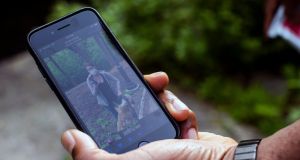 Christian Cooper displays a video recording of Amy Cooper (no relation) on his smartphone in New York’s Central Park. Her reaction to being asked to put a leash on her dog was true Karen behaviour. Photograph: Brittainy Newman/The New York Times

We have reached peak Karen.

Much has, over the past few days, been written about the troubling altercation between Christian Cooper and (no relation) Amy Cooper in New York City. When Mr Cooper, a birdwatcher, asked Ms Cooper to put her dog back on its leash, she announced that she was phoning the police. “I’m going to tell them there’s an African-American man threatening my life,” she said. Melody Cooper, Mr Cooper’s sister, later tweeted a video of the incident and, after days of furious chatter, the dogwalker was sacked from her job in financial services.

Much has already been written about the serious issues kicked up – relations between the police and people of colour, the power of online shaming, all the rest – but we are here interested in more trivial business: the rise and rise of the Karen slur. Melody Cooper introduced the video thus: “when Karens take a walk with their dogs off leash in the famous Bramble in NY’s Central Park, where it is clearly posted on signs that dogs MUST be leashed”.

Over the last few years, “Karen” has been appointed shorthand for a bourgeois white woman of a certain age – roughly 30s or 40s – who enjoys abusing her privilege in public spaces. In most descriptions of such people, we quickly reach the words: “Can I speak to the manager?” The American incarnation is often depicted as having shortish blonde hair (though Amy Cooper’s is dark) and a taste for controlling behaviour.

Intriguingly, a recent article in Vox magazine associates the Karen type with anti-vaccination conspiracies. (Some domestic readers may now be thinking of a sometime journalist who berates blameless shopkeepers for not selling rashers, but I won’t be making that comparison.)

Oh, when Karens take a walk with their dogs off leash in the famous Bramble in NY’s Central Park, where it is clearly posted on signs that dogs MUST be leashed at all times, and someone like my brother (an avid birder) politely asks her to put her dog on the leash. pic.twitter.com/3YnzuATsDm

As ever with such things, the origins are disputed, but an anonymous malcontent, who, around 2017, took to ranting about his ex-wife on Reddit, appears to have started the Karen Express rolling. In the months after F**k_You_Karen deleted his account, the unlovely characteristics of his former squeeze went on to define a contemporary type. It has, in lockdown, been much used to describe jerks yelling at retail staff seeking to apply State-dictated restrictions.

A month or so before the Cooper incident, a controversy bubbled up about the potentially offensive nature of the term. Some of the headlines asked the baffling question: “Is Karen really a slur?”. Allow me to step out from pedantry corner and answer this one with an unequivocal “yes”.

A slur is defined as a word expressing an “insinuation or allegation about someone that is likely to insult them or damage their reputation”. There seems little controversy here. It’s not as if Melody Cooper was using “Karen” as a compliment. “Slur” is one of those words – like “gaslighting” or “troll” – whose meaning has been recently obscured in public discourse. “Karen” certainly fits the definition. (So, incidentally does “Terf,” but let’s not go there.)

The argument was really about whether “Karen” is a sexist, ageist or racist slur.

“Karen” works on a variation of the soccer mom, but no soccer mom gets so identified without conspicuously abusing her privilege

More than a few columnists enjoyed taking self-righteous umbrage. But the argument seems to wilfully misunderstand how demotic language works to undermine uneven power structures. The urge to identify “Karen” as racist, sexist and ageist recalls the hilarious efforts by old Caucasian men with red faces to tag “gammon” – a term for certain old Caucasian men with red faces – as those same three things. That “certain” is doing work in the last sentence. Not every old Caucasian man with a red face gets to be named for cured pork leg.

Since the time of Charles Dickens, “gammon” has been set aside for the class of reactionary bore who feels the world descended into barbarism at the time of his 45th birthday. “Karen” works on a variation of the soccer mom, but no soccer mom gets so identified without conspicuously abusing her privilege. If gammons and Karens were not at the upper end of the power structure the arguments about sexism and racism might hold water. “But, you are, Karen. You are in that chair!” (Yes, that’s a reference to What Ever Happened to Baby Jane?) Take it on the chin, darling.

The only victims here are actual Karens who’ve never demanded to see the manager because the waitress failed to genuflect at her customer’s hem. My affection for the late Karen Carpenter remains undiminished. The indomitable Karen Allen, star of Raiders of the Lost Ark and Starman, never looked like the sort of person who’d bark at a traffic warden. I trust actual Karens have maintained their senses of humour.

Karen Gillan, former Doctor Who companion and current Guardian of the Galaxy, certainly seems to be taking it well. “I’d like to speak to the manager,” she tweeted on January 28th. We salute you. No true “Karen” would be so magnanimous.