Hannah Gadsby: Douglas – Even her detractors will have to admit this is funny

TV review: The Australian comedian’s new special tackles the ‘haters’ and her autism 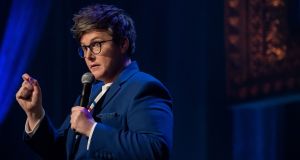 Hannah Gadsby: being told she had autism ‘felt like I’d been handed the keys to the city of me’. Photograph: Ali Goldstein/Netflix

Hannah Gadsby: Douglas (Netflix) is, according to the Australian comedian, “my difficult second album” – the first, Nanette, from 2018, was such a roaring success that, she admits, following it up was always going to be a challenge.

Gadsby establishes from her audience in Los Angeles, where this second special was filmed, that most of them have come to see her on the back of Nanette, but warns them that, if they’re there for “more trauma, I am fresh out”.

She does, though, return to many of the themes that featured in Nanette, from her gut-wrenchingly bleak experiences as a young gay woman growing up in Tasmania to her autism diagnosis three years ago.

On that topic, she gives a stunningly powerful insight to the relief she and others with the condition feel when they are diagnosed as adults. “It felt like I’d been handed the keys to the city of me,” she says, explaining that she was finally able to make sense of things that had only ever left her feeling hopelessly alone and confused.

“I understood why I felt such a profound sense of isolation my entire life despite trying so hard to be part of the team. And that is a big thing about being on the spectrum: it is lonely. I find it very difficult to connect to others, because my brain takes me to places where nobody else lives.”

When the audience applauds she urges them to stop. “I’m not here to collect your pity. I’m here to disrupt your confidence.”

Her critics – and there are quite a few, many of the venomous kind – dismissed Nanette, she recalls, as a “glorified Ted talk”, reckoning that it didn’t deserve to be described as comedy because there was significantly more lecturing than humour.

But while Gadsby can seem a little too preoccupied in Douglas with how her “haters” view her work, she makes good use of their antipathy; misogynists, homophobes and anti-vaxxers all get special attention. Golfers get a decidedly hard time, too, their sport, she declares, “a monumental waste of land, time and water”.

And then there is the man she met in the dog park who introduced himself by saying, “Did you know it takes less muscles to smile than frown?” “No one,” she says, “has ever gone up to a man and said, ‘Cheer up, love, it may never happen.’” If she didn’t already dislike this man enough, she notes that his whippet was wearing shoes.

Even those detractors who suggest Gadsby is not funny might struggle to smother the laughter when she treats us to an art-history lesson, not least when she produces ample evidence in her slide show to prove that most Renaissance paintings featuring women had them in groups of three, standing around naked and just holding random things for no apparent reason.

She is right, there’s less trauma this time around, but Douglas is no less smart or insightful than Nanette. And Gadsby also manages to ask one of the most pertinent questions of our age. Why have we spent so much time looking for Wally? “He should have to find himself, like the rest of us.” True.