A new book points the finger at the then taoiseach, defence minister and attorney general 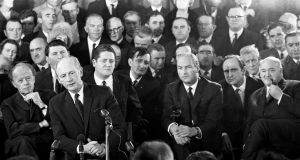 Taoiseach Jack Lynch, surrounded by ministers and Fianna Fáil members of the Oireachtas at a press conference in October 1970. Photograph: Gordon Standing

There are few events in the second half of 20th-century Irish history that resonate so strongly as the 1970 arms crisis.

The sacking of Charles Haughey and Neil Blaney by taoiseach Jack Lynch on May 6th, 1970, over their involvement in an allegedly illegal gun-running attempt, created a political earthquake at the time, and led directly to probably the most famous criminal trial of the last century, the arms trial. The events marked Irish politics for decades.

It is nonetheless extraordinary that, 50 years on, what I believe to be the myths of 1970 should remain alive and well: the principal of the misconceptions being that of Lynch as innocent hero, and that of Haughey and Blaney as sinister plotters.

My new book, just published by Head of Zeus, seeks to debunk these and quite a few other of what the evidence now tells us are false claims about 1970. There is also much new evidence concerning the arms trial. This suggests the prosecution under attorney general Colm Condon – certainly in the way it happened – was never warranted, and challenges any residual claims that the jury got it wrong when they acquitted all the accused. This is indeed provocative stuff, and is guaranteed to be both closely scrutinised and vehemently contested – though not necessarily in that order.

Particularly unsettling to some will be the book’s claims that Haughey and Blaney, those “bad boys” of 1970, as well as the supposedly maverick army Captain James Kelly, have been very often misrepresented and misunderstood in the 50 years since. But my claims are all evidence-based, and, surprising though it might appear, are cautiously expressed; they are the product of six years of doctoral research under the supervision of Prof Diarmaid Ferriter, a foremost authority on 20th-century Irish history, and one who has described this book as “ground-breaking”.

The documents on which I largely base my new findings have been part of the Irish and British State Papers, released to the respective National Archives in January 2001. Extraordinarily, they have not hitherto been comprehensively explored by writers and historians; so it is that only now are some important, recently unearthed, documents being revealed. These have opened up to me fresh lines of inquiry and analysis. But the new material contained in the book does not rest there; other extraordinary data being viewed for the first time is the result of personal research, gathered in the course of my career as a journalist with RTÉ Television, but only fully revealed now.

Taken altogether, the findings raise fundamental questions over Lynch’s conduct in 1969-70, and leave more than a few of the established and widely-accepted perceptions of the 1969-70 period shaken and in need of revision. Those perceptions may be summarised as follows: that in the Arms Crisis Jack Lynch uncovered a seditious plot against his leadership, within his own cabinet; the plot involved his two most senior ministers, Haughey, minister for finance, and Blaney, minister for agriculture, in a scheme supposedly to re-arm the IRA and break partition by force; that Lynch, by his decisive action in sacking the ministers and renouncing the gun-running scheme in which they were involved, averted the greatest threat to the country’s democratic institutions since the 1922 Civil War, and saved the country from involvement in an all-Ireland sectarian conflict; and that Capt Kelly, organiser of the gun-running at the centre of the crisis, was a republican-minded officer who had “gone native” in his desire to assist Northern nationalists with an illegal importation. I believe the evidence casts serious doubt over virtually all these propositions.

So too with the arms trials – there were two, the first being aborted. These were a cause celebre in 1970, and the focus of immense national and even international attention. All the accused – who included Haughey, Capt Kelly, Belfast republican John Kelly, and expatriate Belgian businessman Albert Luykx – were acquitted by a 12-man jury, but the evidence I have found in the files raises major questions over how attorney general, Colm Condon SC, brought the prosecution in the first place.

Although his officers behaved impeccably, my discovery in the National Archives of the final investigation report of Chief Supt John Fleming, head of the Special Branch, raises questions over the approach taken by this senior Garda officer, and over the ultimate responsibility of the Garda Siochana to follow the facts of a case.

The book also throws new light on the controversial editing of Col Michael Hefferon’s main witness statement for the trial Book of Evidence. This provoked major controversy in 2001. Hefferon had been Capt Kelly’s direct boss, and his statement, before it was edited, incriminated the defence minister in the gun-running attempt; after editing, Gibbons’s involvement was largely removed.

The editing can now be seen to fit into a pattern discernible throughout the whole earlier process of the attorney general’s investigation, where there is persistent evidence of an attempt to protect the former minister for defence, James Gibbons. The attorney general can be seen from the documents to show no interest in material that might incriminate Gibbons, whom Lynch, before most statements were even taken, had pronounced to be free of suspicion. Most writers have agreed that the Lynch government was unlikely to have survived the criminal prosecution of its former minister for defence. It seems that Condon realised that Gibbons, as a member of cabinet, could not be prosecuted, whatever the evidence.

In my years researching the Arms Crisis, it became clear that Lynch had a hidden policy on Northern Ireland; this, although it was contingent in nature, was more interventionist and militarily focused than anything to which he ever admitted in public. As taoiseach, he could never come clean on this, so a cover-up was in place throughout 1970 and 1971. This hid the precise nature of documented orders given to the Defence Forces by Gibbons on February 6th, 1970.

Ultimately, the evidence now discernible on the Arms Crisis challenges the truthfulness of both Lynch and Gibbons. The latter is shown in the printed record – I believe conclusively so – to have been a persistently evasive and deceitful witness, and as a result is entitled, as the book states, to “zero credibility”. Lynch, for his part, made a series of persistently false public statements, many of them to Dáil Éireann, and it is hard not to conclude, from the evidence, that Lynch and Gibbons colluded together to present a false and misleading picture of the true status of Capt. Kelly`s gun-running project.The evidence is in the book.

The picture is not a pretty one. The army men, Kelly and his morally brave boss, Hefferon, it is quite clear have been treated disgracefully. They represented, on the evidence unearthed, purely collateral damage, being just small creatures in the jungle; they were cast aside while the big political elephants in the Fianna Fáil party milled about them, trampling the grass, and scattering the trees. I imagine, though I have no knowledge of this, that their fate must in later years have weighed on Lynch’s conscience; Lynch was a decent man, even if he was much tougher and more devious than many will have thought, and he must have known what he had done to Kelly.

Probably few will grieve for the politicians Jack Lynch scapegoated and discarded – some of them permanently, some temporarily – in the1970 melee. Treated unfairly they may have been, but they lived, and they died, by the political sword. What they might not have foreseen was the way Lynch’s deceits were assisted by a compliant Opposition, led by Liam Cosgrave, leader of Fine Gael, and Brendan Corish, leader of the Labour Party.
The Arms Crisis of 1970: The Plot That Never Was, by Dr Michael Heney,is published by Head of Zeus, and is available for online purchase. Michael Heney was for many years prior to 2010 a journalist and television producer with RTÉ