In a typically frank interview, Kathleen Turner has said she would ‘shoot herself’ if she were like [unnamed very rich actress] 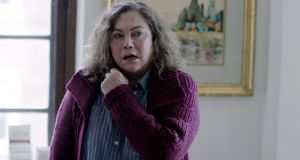 Kathleen Turner: ‘I’ll be quite honest, which is my wont.’ Greg Lewis/Universal Television/Hulu/NBCU Photo Bank via Getty Images

“I’ll be quite honest, which is my wont.” You’re not kidding, Kathleen Turner. The charismatic actor has never been backwards in coming forwards, but her recent interview with Vulture broke new ground for hearty frankness.

“About what?” he replies.

Apparently, the current US president has a creepy handshake that involves him rubbing the inside of the shakee’s wrist with his index finger. “He’s trying to do some kind of seductive intimacy move. You pull your hand away and go yuck,” she says.

She compares the tolerance the industry showed towards Robert Downey Jr when he would “show up on set and be drunk” to the intolerance she experienced after being diagnosed with rheumatoid arthritis in her 30s. “The ‘difficult’ thing was pure gender crap,” she says. “If a man comes on set and says: ‘Here’s how I see this being done,’ people go: ‘He’s decisive.’”

Though generally positive on Michael Douglas and Jack Nicholson – she enjoyed working with both – she sighs about how they and Warren Beatty saw her as a trophy to be pursued.

Turner also takes swipes at a few national and international treasures. She describes how, after being asked to avoid a painful spot on Turner’s wrist during a play, Dame Eileen Atkins sat right down upon it. Apparently, Elizabeth Taylor “has a bad voice, badly used”.

It’s all juicy stuff, but the response that has generated the most chatter saw Turner exercising a rare modicum of discretion. “Certainly in terms of film, there is intense pressure to repeat successful characters,” she says. “I’ll give you an example, but you mustn’t include her name. [Very famous Hollywood actress] has played the same role for 20 years. She even looks pretty much the same. She’s probably one of the richest women out there, but I would shoot myself if I were like that, only giving people what they expect.”

Film Twitter gathered round the virtual water cooler and rowed furiously about the identity of Very Famous Hollywood Actress (VFHA from herein). There was some mad notion that it could be Meryl Streep. This makes no sense. The implication is that VFHA emerged in the 1990s, and elsewhere in the interview Turner expresses affection for her near contemporary. “I wish she would do more stage work. But we’ve all matured into interesting women, yeah?” she says of Streep.

A few others unkindly identified Diane Keaton as the most likely VFHA. Again, Diane has been at this for 50 years and her trademark ditzy persona has been running since Annie Hall in 1977. Even if Turner were to finger such a legend, she’d have no reason to link the alleged stereotyping to the millennial era alone.

Some turned their attention to Sandra Bullock. The dates work out. Bullock has returned to a post-Keaton muddle in films such as Two Weeks Notice, Miss Congeniality and The Proposal. But she has pushed in many other directions. You would have trouble arguing that her roles in Gravity, The Blind Side and Crash are cut from the Miss Congeniality cloth.

The name that came up more often than any other is Jennifer Aniston. There is no question that she is “one of the richest women out there”. She and her co-stars received $1 million per episode for the last series of Friends.

You may be able to name only a handful of Aniston movies, but, for a spell in the noughties, she was rated as the most profitable hire in Hollywood. Films such as Marley & Me and The Break-Up scored significant grosses on relatively tidy budgets (the greatest expense was one J Aniston). Yes, she played the acidic loser in love more often than was strictly necessary. Yes, she still returns to variations of the Rachel haircut.

Turner’s hostility to the Friends team appeared to seal the deal. In a move that has subsequently been much frowned upon, Kathleen was cast as Chandler’s cross-dressing father in the seventh season of the sitcom. Like some other guest stars on Friends (Helen Baxendale for one), Kathleen found the core cast cliquish.

“How did you find them as actors and actresses?” Marchese asks.

This remains speculation. But, since Aniston’s name has come up, it’s worth confirming that she is among the most gifted comic actors of her generation. Nobody else does cynical bewilderment quite so well.

We might also ask if playing the same role throughout your career is such a terrible thing. John Wayne and Humphrey Bogart never moved far from their respective comfort zones. Peter Lorre was always Peter Lorre.

Barbara Stanwyck was invariably the smart-talking wiseacre (with the odd Stella Dallas as seasoning). Judy Holliday was repeatedly brilliant as a likeable idiot. There is nothing wrong with finding a niche and making it your own. Who’d be without Laurel and Hardy?

None of which is to suggest that we don’t need more actors to speak as frankly as Turner spoke. Keep your heads down, Hollywood.