From the archive: ‘The novel seemed unfilmable, but Jordan and McCabe’s collaboration on the screenplay has cracked it . . .’ 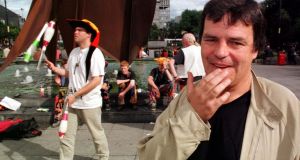 Among the items in the collection are personal correspondence, drafts of film scripts, story boards, production files, notes and photographs.

Below, we take a look back at the review of Jordan’s 1997 film The Butcher Boy. The piece was written by Michael Dwyer and first appeared in the paper on Monday, July 14th, 1997.

What was the extraordinary work of the imagination on the page in Patrick McCabe’s 1992 novel, The Butcher Boy, is fully complemented by Neil Jordan’s surreal, startling and richly cinematic treatment of it which had its world premiere in Galway last night. The audience included the new Minister for the Arts, Síle de Valera, Stephen Rea and 13-year-old Eamon Owens who both star in the film — as well as Jordan and McCabe themselves.

Jordan flew into Ireland from Boston on Saturday morning to attend the 9th Galway Film Fleadh which included a retrospective programme of his work. At a public interview in the Town Hall Theatre just before the premiere, he said that the challenge involved in adapting The Butcher Boy for the screen had been a primary motivating factor.

“I was set to film it two years ago. Then the opportunity to make Michael Collins came up which I couldn’t resist. But even while we were making that, the casting directors were out looking for the right boy to play Francie Brady. If we didn’t find the right boy, I wouldn’t have done the film.” More than 2,000 children in schools and drama groups throughout the country were videotaped and eventually Eamon Owens was found at a school in Killeshandra, Co Cavan. Francie’s best friend, Joe, is played by Alan Boyle who was spotted in the same school.

With its internal structure and stream-of-consciousness narration, the novel seemed unfilmable, but Jordan and McCabe’s collaboration on the screenplay has cracked it triumphantly in this riveting movie.

At the film’s centre is the hypnotic, wonderfully expressive performance which Jordan elicits from gifted young newcomer Eamon Owens. Even though he had no acting experience before Jordan cast him in the title role, Owens well deserves to follow former Oscar-winning child actors Tatum O’Neal and Anna Paquin’s path to the podium on Academy Awards night.

He plays Francie Brady, an outwardly cheerful youngster growing up in a small Irish town in the early 1960s. Stories about the Cuban missile crisis drone away on the radio in the home Francie shares with his alcoholic, feckless father, played by Stephen Rea, and his manic depressive, suicidal mother (Aisling O’Sullivan). In one of several scenes at which one could just as easily cry or laugh, Francie watches his mother work herself into a frenzy preparing ridiculously vast quantities of fancy buns in anticipation of Francie’s Uncle Alo’s arrival home from London.

Francie takes refuge from his deeply dysfunctional family in the company of his closest friend and “blood brother”, Joe, in the cowboys-and-Indians games they play and in the comic-books they swap. But there is only so long that a boy can retreat into idyllic fantasies.

Losing each of his parents and then the company of his cherished best friend — and traumatised by hearing his family described as pigs — Francie is left perplexed, insecure and alone in a big, threatening, adult world. When he snaps, he targets a neighbour, the snobbish Mrs Nugent (Fiona Shaw) — whose shocking-green outfits evoke the aliens of Francie’s comic-books, and who refuses to let her son play with him — as he releases his confused rage in an explosion of violence.

This remarkable picture precisely catches the repression and hypocrisy of an Irish town at a time when the lace curtains of the squinting windows were kept firmly drawn against anything that shattered the cosiness of the superficial contentment of daily life. The black humour which permeates the movie and erupts uproariously at some of the most unlikely moments effectively counterpoints the intensity of the drama, even when the smiles are abruptly wiped off the viewer’s face.

Jordan’s 10th feature film, The Butcher Boy is closest both in themes and treatment to his second movie, the Angela Carter adaptation, The Company of Wolves, with his heightened, stylised approach to the story of an essentially innocent child caught up in a maelstrom of fear, cruelty and dislocation.

Jordan has meanwhile been casting his new movie, In Dreams, and seeking locations for it in Massachusetts where shooting starts in six weeks’ time. A psychological horror-thriller, it will star Annette Bening, Aidan Quinn and Robert Downey junior.